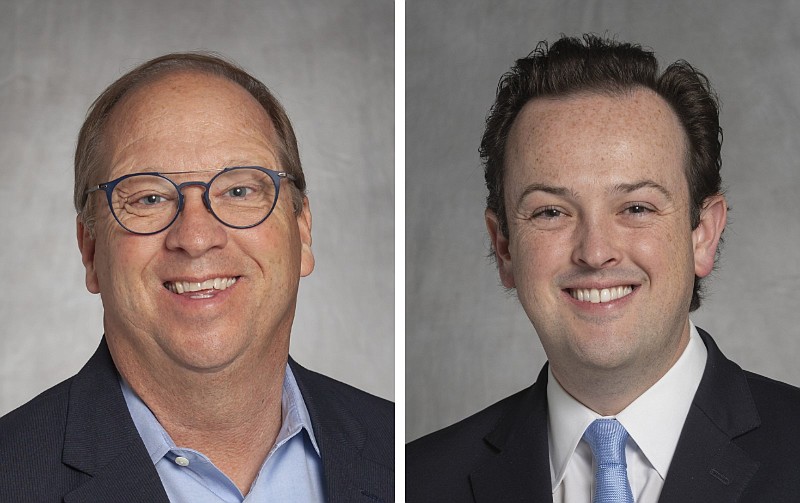 Republican Jon Wickliffe is putting an emphasis on combating crime in Little Rock as he tries to unseat Democratic Rep. Andrew Collins for the state House District 73 race in the Nov. 8 general election.

Wickliffe defeated Robert Steinbuch, a professor at the William H. Bowen School of Law at the University of Arkansas at Little Rock, in the May 24 Republican primary.

House District 73 encompasses the Riverdale area of Little Rock and stretches west to include Cammack Village and the Heights, River Mountain and Pleasant Valley neighborhoods, as well as part of west Little Rock.

All 100 House districts were redrawn last year after the 2020 U.S. census, so some neighborhoods previously represented by Collins were moved into other districts while others moved into the reconfigured District 73.

Wickliffe, 54, said he views the redistricting as favorable to his campaign because of the addition of the Pleasant Valley neighborhood.

"I believe that is going to benefit me as a conservative," he said.

Collins, 39, said he has spent the past few months in the new neighborhoods in his district.

"I feel pretty positive about the district," he said.

Wickliffe attended Oak Grove High School in North Little Rock and earned a degree in criminal justice from the University of Arkansas at Little Rock. He worked for the Jeffrey Sand Co., ultimately as superintendent of the Conway location, before going into pharmaceutical sales from 1999 to 2021. He served on the Little Rock Port Authority Board for 19 years and was appointed by Gov. Asa Hutchinson to the Arkansas Economic Development Commission in 2019. He has two children.

Collins is an attorney and has been a representative in the Arkansas House since 2019. He attended Duke University and received his law degree from Columbia Law School, and worked for AmeriCorps VISTA for one year in 2005.

Wickliffe has described himself as a moderate Republican.

"I am a conservative, but I believe in the society we are in today that there are other points of view that do not need to be ignored just because they aren't as conservative as I am," he said. "The one thing I bring is the fact that, regardless of what party you are in, I want to hear what points of view you have and I want to take them to the Capitol.

"I want to bring back the politics of my parents' generation where you get along and bring good ideas regardless of what party you are in and bring down that divide."

Wickliffe said being a member of the majority party will better benefit District 73. Born and raised in Central Arkansas, Wickliffe said he has always had an interest in making the area a better place.

"I think it's important to be involved in growing your community, whether it's economic development or making sure you are interested in what is going with crime and the good things that are going on in the city."

Collins said he has fought for Arkansas families ever since being elected and will continue to do so if re-elected.

"I work hard, and I work with others across the aisle," Collins said. "I have gotten many of my own bills passed and challenged bills I think are harmful."

Collins pointed to having his bill passed soon after the Jan. 6 insurrection despite being a Democrat in a General Assembly filled with Republicans. The bill requires Arkansas' counties to post sample ballots on the Secretary of State's website before each election.

"It was the first bill by a Democrat that got through the session," he said. "It broke the dam and changed the tone of that session. It was a lot more work than it needed to be, but I was glad that we got it done. It helped restore the legislature to a more functional place."

Both candidates said reducing crime would be a top priority, specifically when it comes to public safety in the Little Rock area.

"Crime has definitely spiked in Little Rock and in Arkansas, and even nationally, and we've got to deal it with urgently," Collins said. "A lot of that happens on the city level, but there are things we can do on the state side."

The key to solving the crime issue in Central Arkansas is addressing the underlying issues that lead to crime, Collins said.

"We need to improve our criminal justice system so that it works effectively," he said. "Our prisons are overcrowded, and we don't have enough parole officers and police officers. Simply increasing punishment across the board will not solve the problems. We have to be smarter about it, and we need to improve our drug and mental health offerings in the state."

"I know recently the governor came out and talked about adding 500 more beds, and I hear the argument that says, 'That costs a lot of money, Jon.' But, at the same time, I see the Pulaski County jail is 104% occupied and there is nowhere to put people that are violent in jail," Wickliffe said. "I don't know how many family members anybody would be willing to give up to be unsafe and to not keep those who are violent off the streets and in jails."

If elected, the one thing that Wickliffe said he would want to make sure happens is that laws are put in place to give judges and prosecutors the ability to keep violent offenders off the streets.

"If that means creating larger jail space to be able to do that, then that is something that judges and the prosecutors need to be able to have the ability to do," he said. "...I believe in second chances, but at some point it is because they aren't being kept off the streets."

Collins said the state needs great teachers to make great schools and the only way to do that is by recruiting and retaining teachers through adequate compensation.

"We recently tried to lead the charge in increasing teacher pay in the state," he said. "We need to give our teachers a raise to ensure great teachers are in our schools."

Wickliffe said he favors raising teacher pay and would like to see it reach around $46,000 a year. He also favors school vouchers, but he wants to keep an eye on public schools.

"I am for any system that benefits the children of Arkansas," he said. "Every child is different, and that child deserves to go to the school that best fits them. I think that we also need to make sure those public schools that are in need of improvement don't get left behind in these voucher programs."

Collins said he is against vouchers.

Arkansas Attorney General Leslie Rutledge implemented earlier this year a 2019 "trigger law" that bans abortions in Arkansas, except to save the life of the mother in a medical emergency, after the U.S. Supreme Court overturned the landmark 1973 ruling in Roe v. Wade that legalized abortion across the nation.

Act 180 of 2019 was crafted to take effect when the state attorney general certified that Roe had been overturned, returning to the state the authority to prohibit abortion.

Collins said he opposes the abortion ban and said the current one goes too far.

"There is no exception for rape and incest, and it will lead to a lot of really tragic situations for women and girls in our state," he said. "We need to add at minimum an exception for rape, incest, and infant mortality. I would be comfortable repealing the trigger law altogether and bring us back before the Dobbs decision."

Wickliffe said he is pro-life but believes there needs to be an exception for the health of the mother, rape and incest.

"As a man, abortion is something that I will never have to make that decision," he said. "My heart goes out to anyone that does."

The state's Medicaid expansion program ARHOME -- which stands for Arkansas Health and Opportunity for Me -- took effect this year and replaced Arkansas Works and will end Dec. 31, 2026, under the waiver approved by the U.S. Centers for Medicare and Medicaid Services.

Wickliffe said he is in favor of continuing the state's Medicaid expansion program, which provides health insurance to more than 300,000 low-income Arkansans.

"I have been in healthcare for 23 years, and I have seen the Medicaid expansion benefit those that are the most in need in Arkansas," he said. "It gives those who have the least amount of money an opportunity to go see their doctors, dentists, pharmacists and get the healthcare that they need."

Collins said he believes ARHOME is important to rural hospitals and the state's healthcare.

"It should be continued in some form," he said.