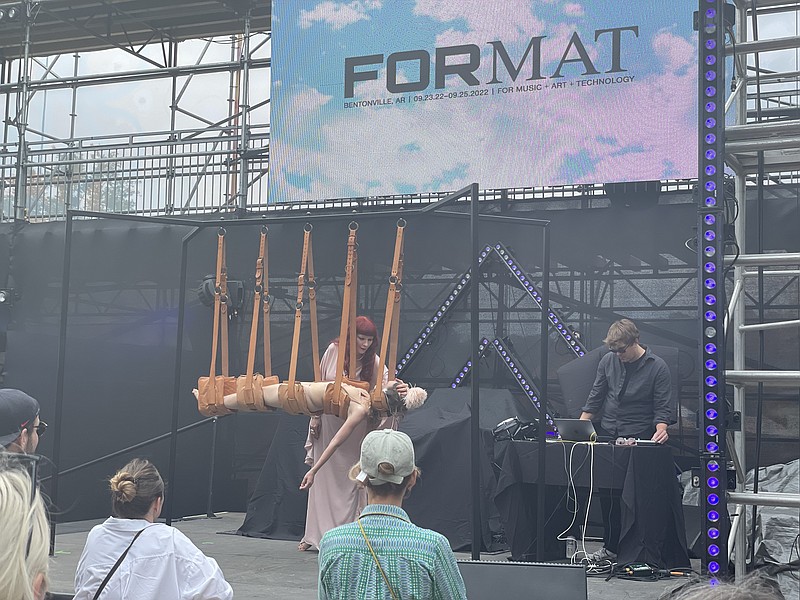 While returning to Sugar Creek Airstrip for the second day of FORMAT (For Music, Art and Technology) Festival, you might notice distinctly blue and green streams of light shimmering into the night sky. Actually, it's hard to miss.

The aurora borealis-like effect comes from a mirrored hot air balloon installation, "New Horizon" by Doug Aitken. Anchored at the furthest end of the festival grounds, the balloon's metallic, reflective brilliance, paired with seams of kinetic lighting and colorful projections draws crowds further into the surreal, artistic events of the night. They just have to see where the colorful light is coming from.

By the time they get all the way to the balloon light sculpture, they might notice that the projections not only change color and pulsating patterns, but are able to make images of clouds in midair. Some might even lay flat on the ground to watch the digital clouds roll by in the night.

As a festivalgoer who wants to take in everything, you have a lot of stops to make. To get to Smokey's, a venue in a hidden forest enclave, you have to step through James Tapscott's work, a circular, eclipse-like installation called Arc Zero. From far away, you see the light element smudging visually. It's only when you walk under it that you realize the site-responsive work is misting the people that walk below it.

Once inside the forest behind it, music lovers are thrown into a venue designed by assume astro vivid focus, an artist duo--one from Brazil, the other from France. The result is something they describe as an adult playground to encourage playfulness, movement and inclusivity. The stage is neon colored and resembles a creatures face--artists on stage can be seen inside it's big mouth. During performances, lights sometimes form a jagged line like teeth or shoot laser-like beams from its eyes.

The venue's small nature keeps the viewing experience fairly equal. No place is that much better or worse to view, only different. And you can't miss the shimmering disco ball glimmering at its center.

Tracing your steps back through Arc Zero and past the hot air balloon is a small black box of a place. If you dare to pull back a black curtain and step inside a room as black-as-night, you'll see a spatial artwork by John Gerrard and Richie Hawtin. The digital simulation produces a video loop of an ouroboros, a snake eating its tail, historically a symbolic of infinity or the cycle of life, death and rebirth. It's shown in combination with techno music to immerse audiences with the music and visual aspects.

Next to it is the site for Boris Acket's "Waaiwerken," which was debuted Friday but taken down Saturday for repairs due to unforseen circumstances.

As you start to walk past the barn which once sat at The Momentary, you might get pulled in by local drag queen Maddy Morphosis, who hosted the venue renamed "Drag Me to the Disco" for FORMAT Festival. Inside the disco madhouse this weekend--aside from the neon green spotlights, disco balls lining the rafters and glitter curtains dividing small seating areas--was live salsa, funk and African disco performances, not to mention lots and lots of dancing.

If you manage to break free, your next chance to dance is one stop down at Solana House, marked by a small forest of metallic cylinders (that stand taller than most people), where live DJ sets happen with digital video backgrounds. Come back during daylight hours and they offer you free snacks, like popsicles and tamales.

Across the way is a three story building called The Cube. Long before you get inside, you can see people enjoying the 4D sound and augmented sonic realities. The lights reveal the thin, translucent material of the structure's exterior, making the silhouettes from within a part of its look.

After all the dancing and walking, DomeRx is a welcome stop for legs and minds that need a break. In Darren Romanelli's 360 Immersive Dome, festivalgoers choose a bean bag to lay back and watch projections not unlike a laser light show while listening to techno and other music. Some sets were described as "plant poetry meditations" and "plant music listening parties."

Once you've rested, you might have just enough time to poke your head into one of the holes in Pia Camil's large fiber artwork, which looks like a ton of t-shirts stitched together. Then it's back to the live music.

Local Cherokee singer-songwriter Kalyn Fay played the opening performance on the North of Oz stage early Saturday afternoon, followed by British alt band Palace. Between songs, lead singer Leo Wyndham said he never imagined they'd be playing in Arkansas. By the end of the set, Wyndham said they'd be back to the region soon.

The Flaming Lips, Beach House and Rufus du Sol all played to packed audiences on the North of Oz and South of Oz stages late Saturday night into early Sunday morning.

Nick Cave's 10 feet tall raffia and hair sound suits interacted and danced at the edge of the stage to songs and performances by The Flaming Lips. As the sound suits left, lead singer Wayne Michael Coyne, who was in a Wonder Woman said "Whoever those freaks were, it's not likely they'll run into a place as cool as this is tonight." When their set came to an end, Coyne said "Thank you for being so enthusiastic...and for your beautiful screams."

As the Australian house and electronica band Rufus du Sol took the stage, lead singer Tyrone Lindqvist opened simply with "Let's dance," and much of the audience obliged. Lindqvist had Covid two weeks ago and was feeling pretty lucky to be back around people, he noted. Rufus du Sol's drummer James Hunt said it was the first time for the band to be in this part of the U.S. and thanked everyone for the warm welcome. 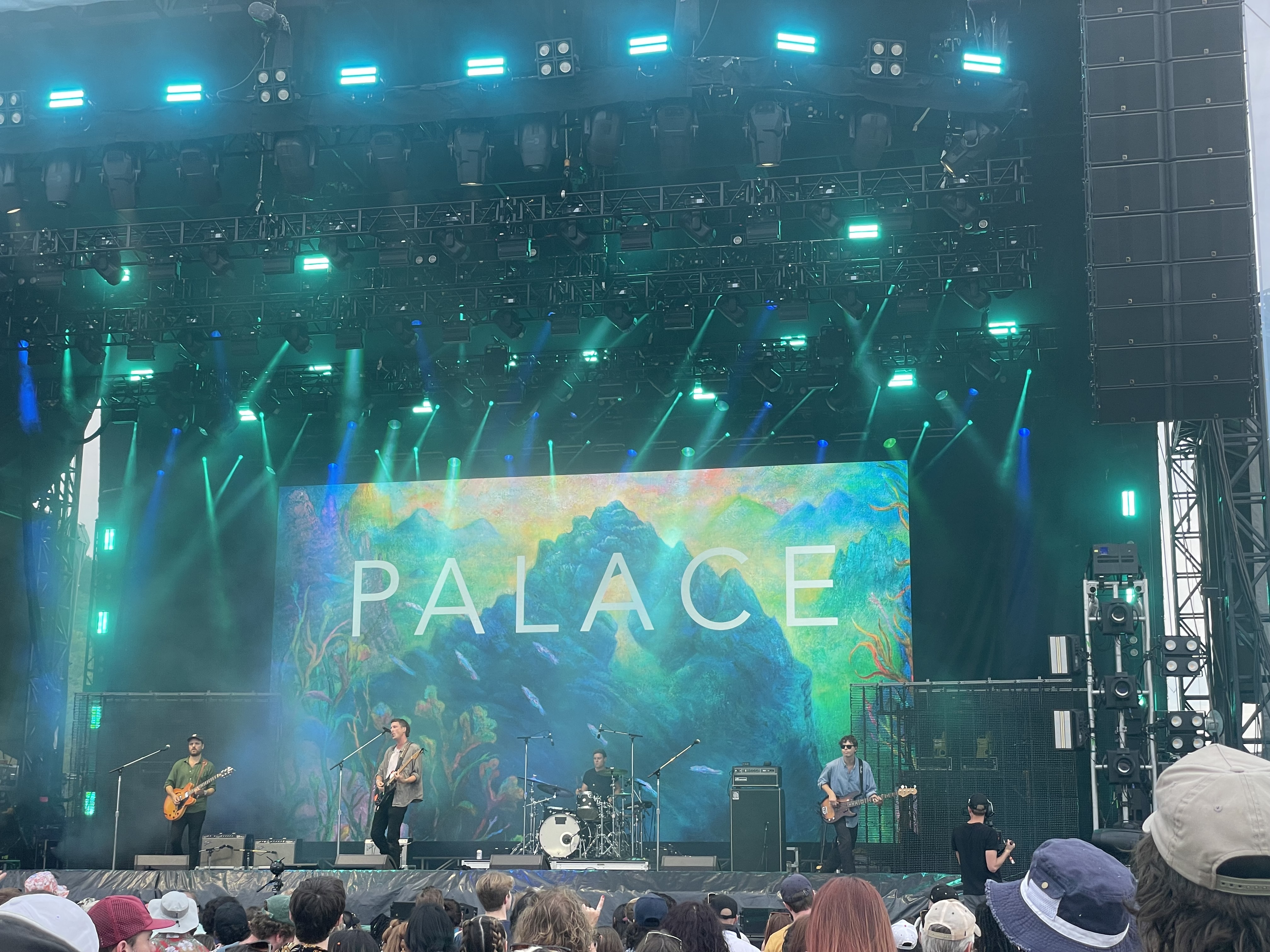 British alt band Palace performed midafternoon Saturday at FORMAT Festival. Between songs, lead singer Leo Wyndham said he never imagined they’d be playing in Arkansas, but by the end of the set, Wyndham said they’d be back to the region soon.

View of the end of The Flaming Lips set on the North of Oz stage. Nick Cave’s 10 feet tall raffia and hair sound suits interacted and danced at the edge of the stage to songs and performances by the band. 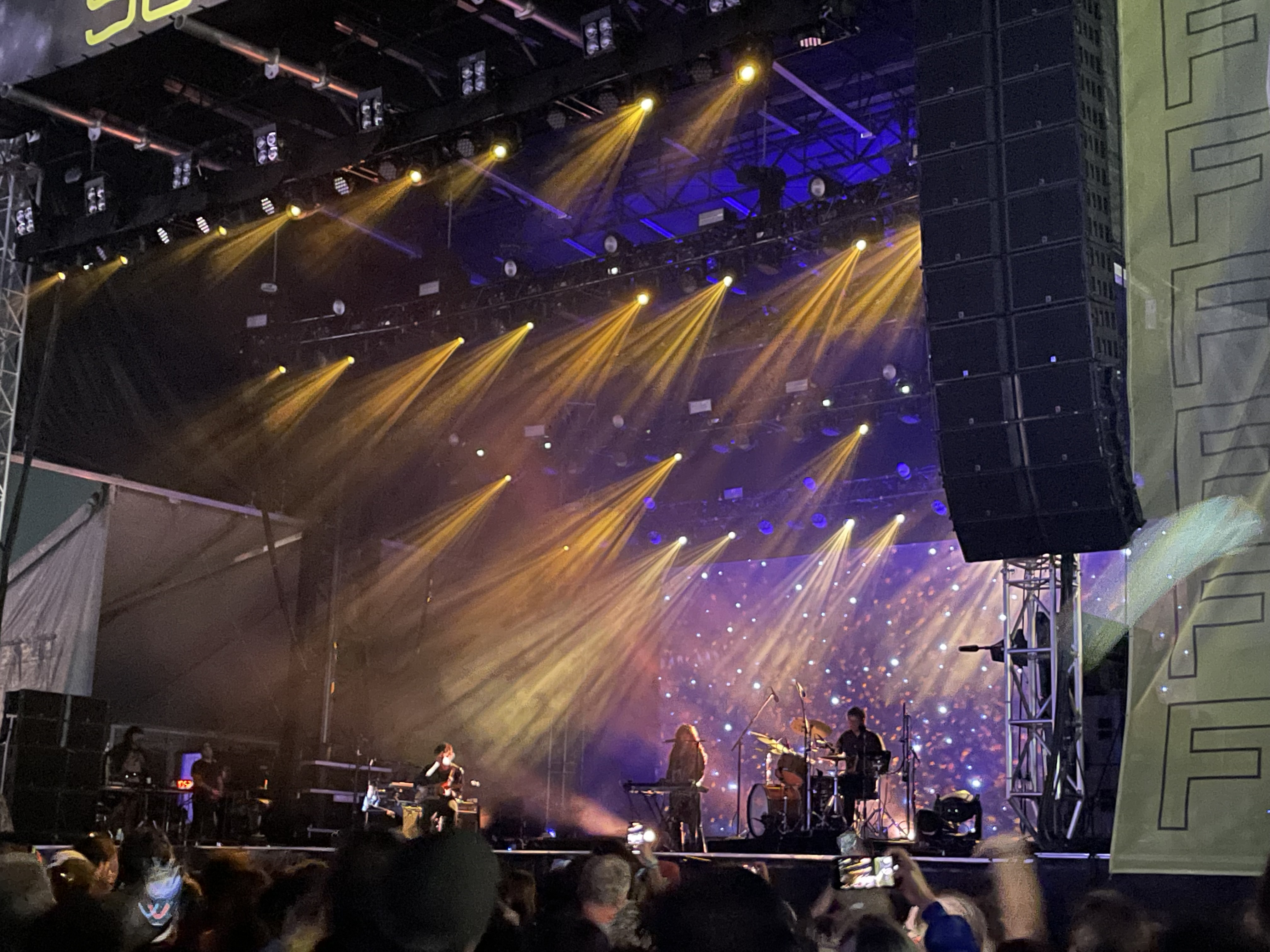 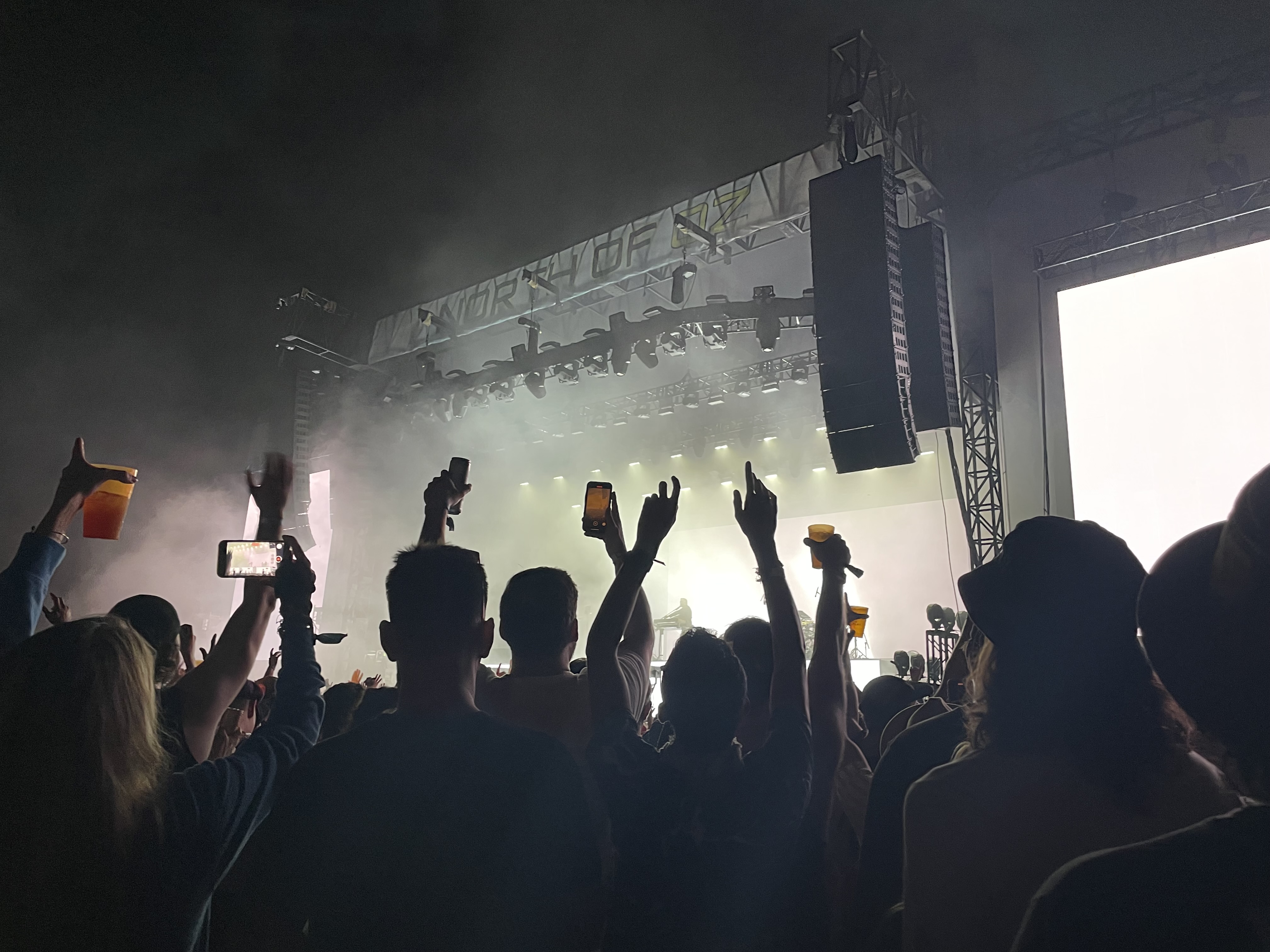 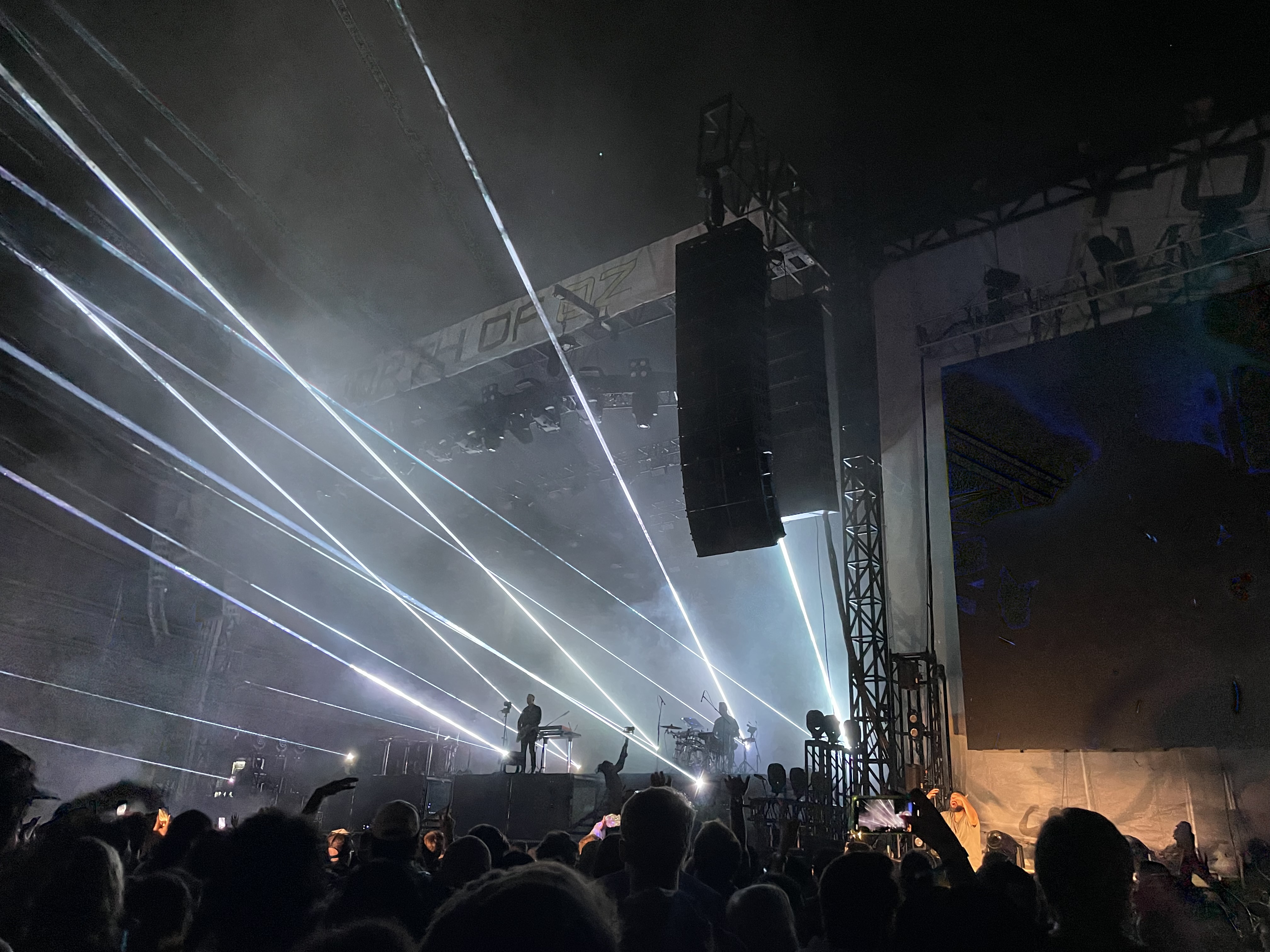 When Rufus du Sol took the stage at FORMAT Festival Saturday night, lead singer Tyrone Lindqvist opened simply with “Let’s dance,” and much of the audience obliged. This was the first time for the Australian house and electronica band to perform in this part of the country. 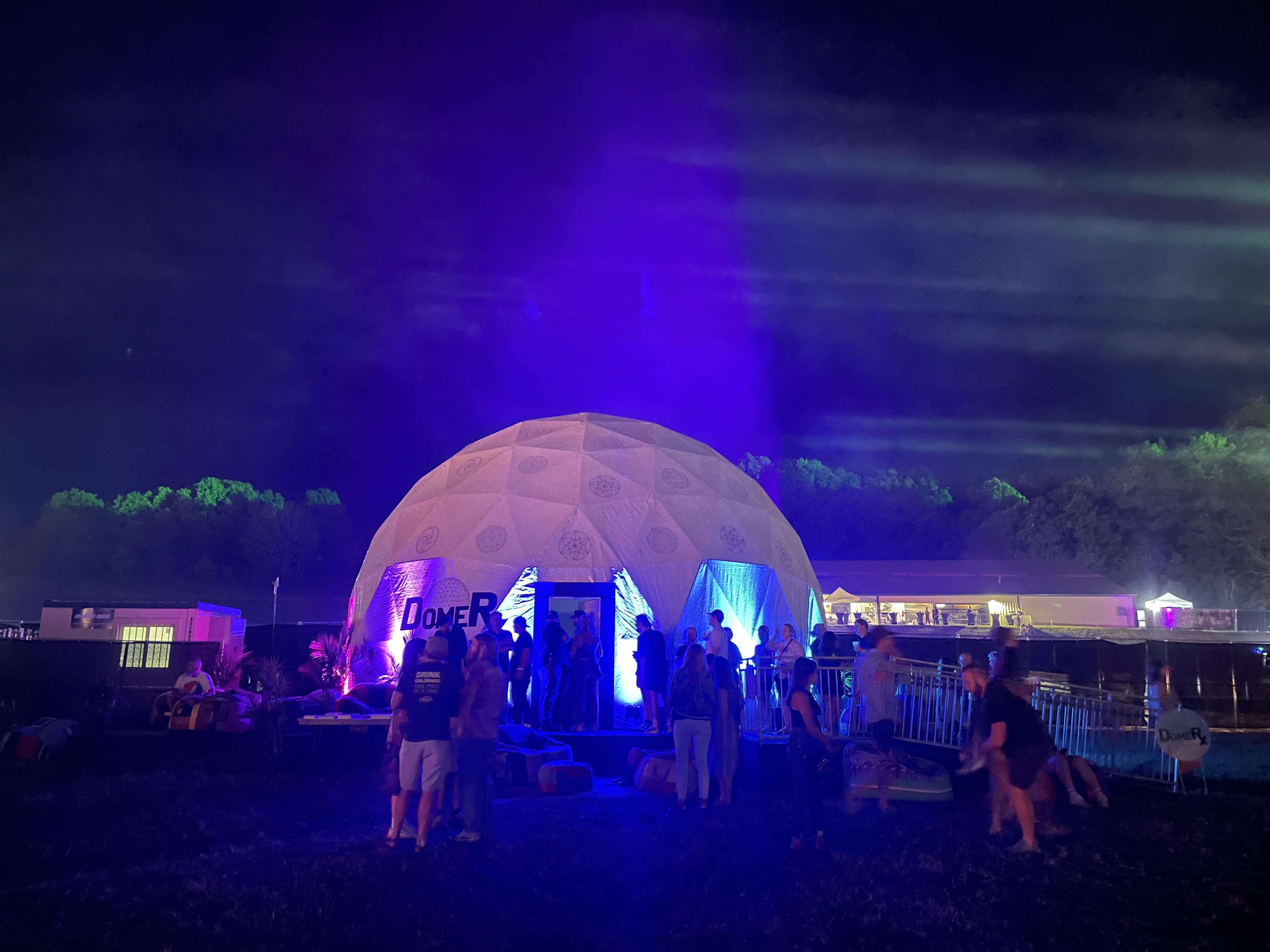 DomeRx is a welcome stop for legs and minds that need a break. In Darren Romanelli’s 360 Immersive Dome, festivalgoers choose a bean bag to lay back and watch projections not unlike a laser light show while listening to techno and other music. 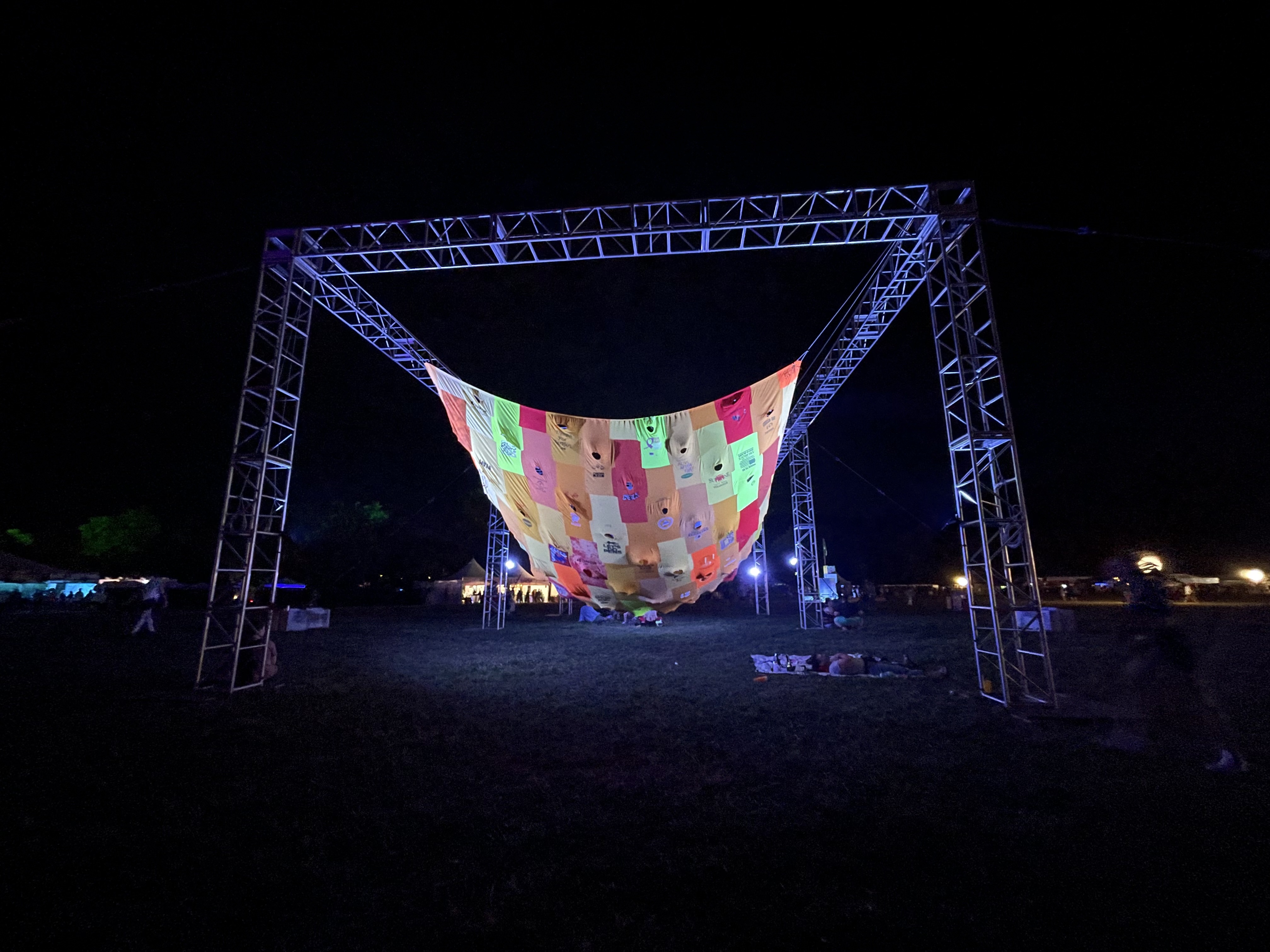 Pia Camil’s large fiber artwork, which looks like a ton of t-shirts stitched together, is displayed in the center of festivalgrounds. Music goers can stick their heads into the holes to look at the other side of the creation.