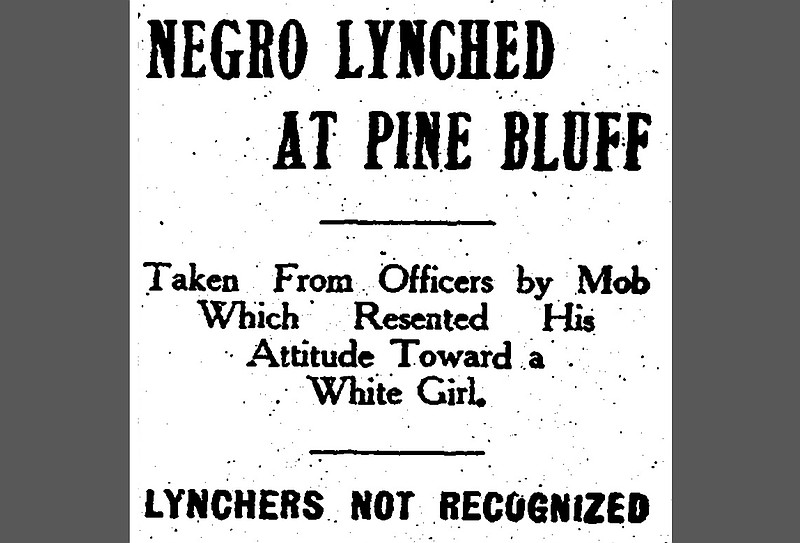 A front-page headline from the March 26, 1910 issue of the Arkansas Gazette tells readers of the fate of Judge O. Jones, a 26-year-old Black man. Jones was arrested early Friday, March 25, 1910, and was tried that night. He was taken from police by armed men and hanged. (Arkansas Democrat-Gazette file photo)

Jones was arrested on the Friday morning of March 25. Jones' arrest was based on accusations that Jones showed up at the home of a Mrs. Mueller, demanding to see her 22-year-old daughter, Louise Mueller. He tried to enter Louise's room, claiming he had every right to see her as they were married in the sight of God.

The authorities were soon contacted, and Jones was taken into custody. Jones was tried on three counts of trespassing charges by Judge J.A. Frazier that very night. He pleaded guilty, was fined $300, and was sentenced to 120 days of imprisonment on a convict farm in Red Leaf, Chicot County. While the trial was in progress, a crowd had gathered outside the courthouse.

Sheriff C.M. Philpot feared mob violence, so at 10 p.m. that night, he arranged for three of his officers to secretly transport Jones to the southbound Iron Mountain train. Sheriff Philpot had taken such precautions in the past and had been successful in preventing the lynching of all but one of his prisoners.

Under the cover of darkness, the officers took a circuitous back route that ran behind the Diller Foundry Co. under the advice of Sheriff Philpot. Two of them waited with Jones, and the third officer left to buy the train tickets. As they waited, the two officers were rushed by a mob of 40 to 50 armed men who surrounded them with revolvers and took Jones. They carried him to a water tank at the back of the foundry, where they tied a rope around his neck as he stood on a wheelbarrow, which they soon pushed from beneath him. After Jones was hanged, the men released the officers, ordered them to hurry away, and quietly disappeared into the night.

The next morning, the Pine Bluff Daily Graphic reported, "The lynching was so quiet that when the news spread many persons could not give credence to it." The Arkansas Gazette also reported, "Owing to the darkness, none of the officers was able to recognize any of the lynching party."

Jones was buried in a potter's field in the Black section of Bellwood Cemetery. The coroner secured a jury investigation into the murder but no witness could be found who knew anything about the lynching. He reconvened the inquest later in the day, and adjourned the inquest until the Monday following the lynching, hoping for additional information, but no one came forward. He finally closed the case, ruling that "Jones came to his death by being hung by unknown parties."