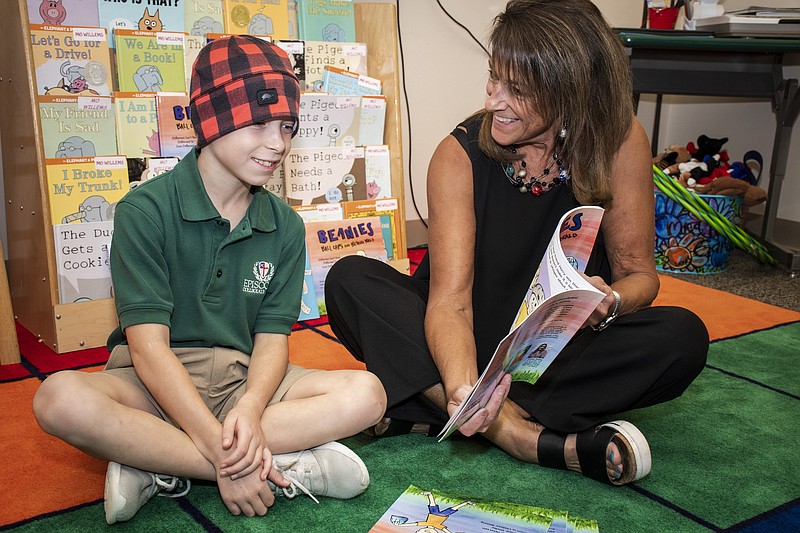 Matthew Shelby and Tracy Peterson talk about their favorite parts of the book "Beanies, Ball Caps and Being Bald" on Sept. 20, 2022, at Episcopal Collegiate School. (Arkansas Democrat-Gazette/Cary Jenkins)

It's a sunny Tuesday afternoon earlier this month and 9-year-old Matthew Shelby is at home in Little Rock with his parents, Michael and Aimee. Matthew, a fourth-grader at Episcopal Collegiate School, is neatly dressed in a blue-and-white-striped Vineyard Vines polo that is tucked into a pair of khaki shorts. On his head is a digital camo-print beanie in shades of gray made by Turtle Fur.

A beanie, or sometimes a ball cap, has been a constant in Matthew's wardrobe since he was in kindergarten. That's when Aimee noticed that his hair was falling out. They visited a doctor, and Matthew learned he had alopecia, an autoimmune disease in which the immune system attacks healthy hair follicles.

"The first thing I did was try to find some books on alopecia to help him understand what was going on, and I really couldn't find anything," Aimee says.

Now other parents in the same situation can read Matthew's alopecia story, which is told in "Beanies, Ball Caps and Being Bald," the new children's book written by Tracy Peterson with help from Matthew. Subtitled "Different Isn't Bad. Different Is Just Different" and illustrated by Lindsey Witting, the book will be released Tuesday by Little Rock-based publisher Et Alia.

◼️ Alopecia areata, the most common, is characterized by hair loss in coin-size patches or multiple patches on the scalp or other parts of the body. This is the kind Matthew has.

◼️ Alopecia totalis is when hair loss occurs to all or nearly all of the scalp.

◼️ Alopecia universalis, the most rare, is the loss of all or nearly all of the hair on the scalp and body.

There are about 6.8 million people in the United States with alopecia areata, according to the National Alopecia Areata Foundation. The cause is still a mystery, according to the foundation, and there is no cure, but hair follicles remain alive and hair can grow back.

Matthew, who has an older brother named Jack and a half-brother named Porter who lives in California, wasn't exactly thrilled about his diagnosis.

"It was strange and weird," he says.

"We just wanted to figure it out and try to help as much as we could," Michael says.

"There was a little bit of disbelief," Aimee adds. "We wanted to make sure Matthew was as comfortable as he could be and accepting of it. He has our full support in however he wants to handle this."

Alopecia hasn't stopped Matthew from being an active kid. After our interview, he has a Junior Deputy Baseball game with his team, the Astros. He's on the Episcopal Collegiate football team; his favorite school subjects are math and language arts; he participates in a fantasy football league and loves video games.

"I have an XBox, an Oculus and a [Nintendo] Switch."

"He has this fun, quiet way about him," she says. "He took his work seriously, but he was very much a fun-loving first-grader who liked to play and wrestle with his friends."

Peterson is a native of Santa Barbara, Calif., and has been teaching for almost 40 years, 11 of those in first grade. She was the 2005 Little Rock School District Teacher of the Year, and last year she received the Jackson Stephens Excellence in Teaching Award at Episcopal Collegiate.

"Beanies, Ball Caps and Being Bald" is her second book for Et Alia. "Cartwheels: Finding Your Special Kind of Smart," also illustrated by Witting, is about another Peterson student, Sloane LaFrance, and her experience with dyslexia.

Both books are told from the children's perspective.

"Sloan was very forthcoming about her dyslexia," Peterson says. "With Matthew, it was a little different. He's a little more hesitant to share, so we were stepping a little bit lighter."

In "Beanies ..." readers learn about Matthew's confusion and sadness when he was diagnosed, along with the disappointment he felt when he started losing his hair again after it seemed to be coming back. There's also the excitement he feels when Aimee suggests wearing a beanie, the support he gets from his friends and his acceptance of alopecia.

And there's an appearance by Rizzo, the Shelbys' friendly, happy Boston terrier.

Matthew wasn't shy about editing choices during the writing process, Peterson says. When she showed him her first draft, "he was very specific about editing the words ... he had a quiet confidence and was very sure of himself about how he wanted things worded and how exactly it should be stated."

The book can act as a starting point for a conversation about alopecia between children and their parents or teachers, Peterson says, and it also lets them know that it's OK to be different.

"You want to take the elephant out of the room. We hope that it will get into the hands of kids and they will be able to take it to their classrooms and say: 'Different isn't bad. Different is just different.' That's the goal. There are a lot of kids fighting some big battles, and to be able to empower them a bit is fun."

Speaking of empowering, this spring, sports fan Matthew got to meet Arkansas Razorbacks football player Landon Jackson, who also has alopecia. And Jackson's not the only Hog with alopecia. Men's basketball player Jordan Walsh and Rylee Langerman of the Lady Razorbacks basketball team also have it.

In 2021, Matthew attended a camp in Indiana called Alopecia Palooza presented by the nonprofit Children's Alopecia Project that included an appearance by actor Anthony Carrigan of HBO's "Barry" who also has alopecia.

"We do think it is going to do some good, and that's what it's all about," Michael says.

"Being a mom and seeing how personal this is, the story is still very tender to all of us," Aimee says. "I was a little apprehensive, but Matthew is really brave, and I'm proud of him, and I'm happy he is sharing his story with others."