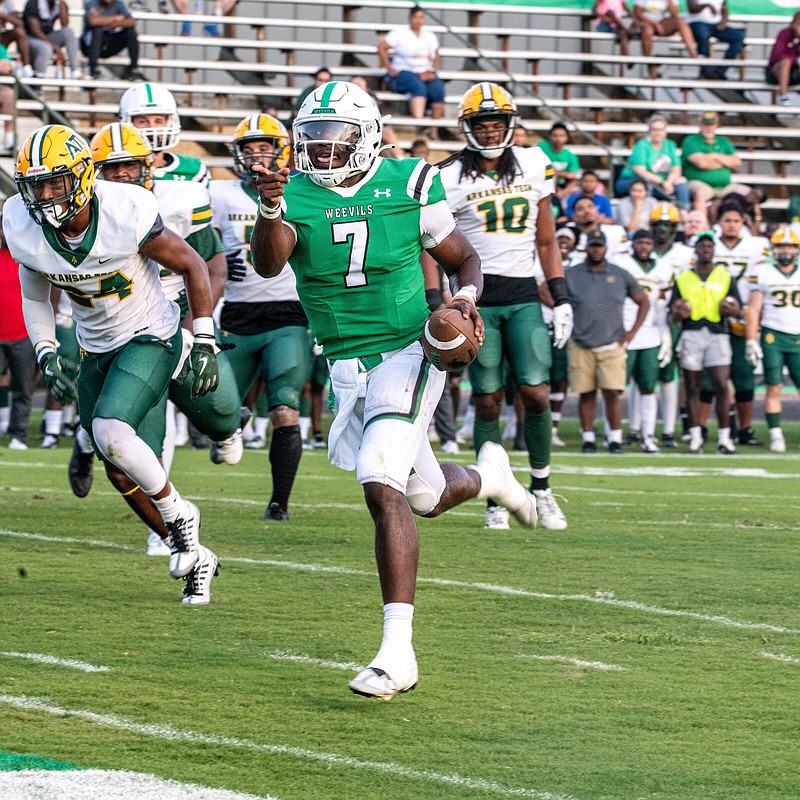 University of Arkansas at Monticello Boll Weevils DeQuan Street runs the ball toward the endzone during Saturday's game against Arkansas Tech University. (Special to The Commercial/UAM Sports Department)

The University of Arkansas at Monticello Boll Weevils steamrolled to victory against the Arkansas Tech University Wonder Boys on Saturday night, 35-17.

The UAM stands were packed as the home team celebrated Parent and Family Day. One family even drove 600 miles to watch the Great American Conference game between the two Arkansas rivals.

At 12:25 in the first quarter Weevils senior quarterback Demilon Brown rushed 28 yards for his first touchdown of the game, putting UAM on the scoreboard.

Brown didn't stop there. With 6:08 remaining in the first, Brown did it again, running 8 yards into the end zone for his second touchdown.

The Boll Weevils held the Wonder Boys, preventing them from scoring in the first quarter. At 9:58 in the second quarter, ATU's Tyler Day dashed five yards into the end zone. ATU was on the board 14-7.

With 32 seconds left before halftime, the Wonder Boys' Deon Simmons rushed a single yard for ATU's second -- and last touchdown -- of the game.

The Game Changed When

The Boll Weevils bolted from the locker room after halftime ready to shut down the Wonder Boys.

Brown sprinted into the end zone for his third rushing touchdown after a six-play, 46-yard drive. The kick was good putting the Boll Weevils up 21-14.

With two minutes left in the third quarter the Boll Weevils Isaiah Cross pulled in a 44-yard heave from Brown and ran it successfully into the end zone. The Boll Weevils led 28-14 at the start of the fourth quarter.

At the 11:28 mark the fourth quarter, the Boll Weevils' Hayden Thomas ran a touchdown into the end zone on a five-yard rush after an eight play 49-yard series.

The Wonder Boys tried to hold back the Boll Weevils but every attempt failed as UAM's offense and defense continued to dominate. A series of ATU turnovers gave UAM key advantages throughout the night.

"Extremely proud of our players and coaches and our entire staff," said Boll Weevil Head Coach Hud Jackson. "Played well! We will continue to work the process day to day. Our players understand that each play is different and we have to move to the next one whether good or bad. Can't wait to practice next week and be around this group because they want to be great. So proud of our athletic department because they work so hard to make our game day experience top notch. Eat'em up!"

The Game Ball Goes To

The Boll Weevils quarterback Brown who had three touchdowns, was 8-of-16 on passing plays for 114 yards and claimed a touchdown pass to Cross.

The Weevils travel to Southwestern Oklahoma State University in Weatherford next Saturday. Game time is 2 p.m. Arkansas Tech University also plays at 2 p.m. in an away game at Southern Nazarene in Bethany, Okla.