It’s hats off for Springdale firefighters; Council to consider spending $63,000 to rehelmet 160 firefighters 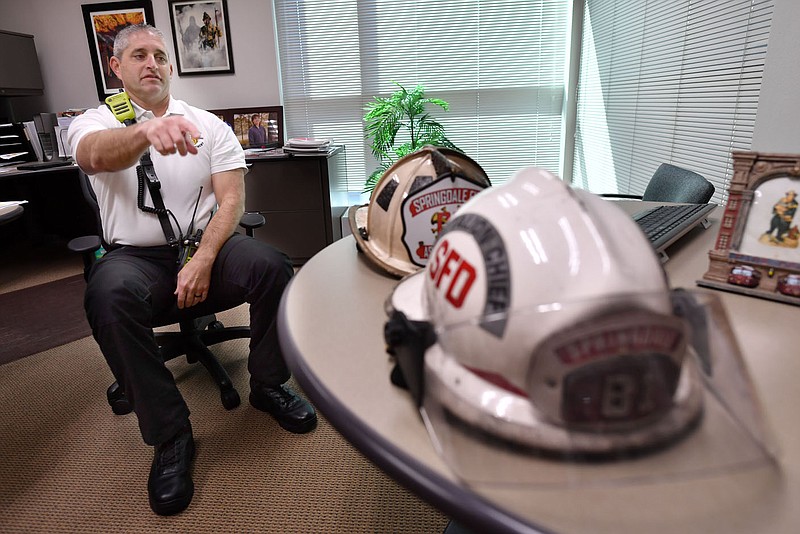 Springdale Fire Chief Blake Holte gestures Tuesday, Sept. 20, 2022, while speaking about the two styles of firefighting helmets available to firefighters. The department has decided to change to from the metro style helmet to a more traditional style favored by current staff. The department will purchase about 160 of them in different colors to signify different roles in the department to further aid quick identification of staff during an emergency. Visit nwaonline.com/220925Daily/ for today's photo gallery. (NWA Democrat-Gazette/Andy Shupe)

SPRINGDALE -- The Fire Department chief says his team needs new helmets and has asked the City Council to spend up to $63,000 for their purchase.

The council, meeting as a committee of the whole Wednesday, moved the measure for a vote Tuesday.

Fire Chief Blake Holte said the department would save $8,800 if it buys the helmets together instead of a few helmets at a time.

Individual helmets cost about $355. Accompanying gear such as the chin strap would come at no cost with a promotion from Casco Industries in Shreveport, La., which sells fire equipment.

The money would come from the Act 833 fund, which returns to fire departments tax money residents pay in their homeowners insurance, fire insurance and property taxes. The fund now holds about $400,000, reported Colby Fulfer, the mayor's chief of staff.

The Fire Department also has asked the council to approve $753,930 for a new fire engine. Payment at the time of order saves the city $31,643, Holte said.

The money would come from undesignated money in the city's budget. The fund held $21 million as of Wednesday, Fulfer reported.

The new helmets will come with a new look, Holte said. The department would change the style of the helmets to the more traditional look, with a high crown and long back angled down, he said.

"That way the water runs off, and you don't get hot water down your neck," he said.

The department also would change the way it uses the helmets -- to help identify individual firefighters at a scene, Holte continued.

The new helmets would show the rank of the firefighters at a quick glance because each rank would wear a different color helmet, Holte said.

Firefighters got to try several styles of helmets before a model was chosen. Firefighters had started buying their own helmets, but Holte said he wants them wearing the same thing.

Capt. Rance Richardson, president of the Local 3007 Springdale Fire Department Union and captain at Station 4, said the union sponsored a vote to choose -- among two -- the shape of the helmet. Most wanted the traditional style -- the Cairns Metro.

It came down to comfort, look, price and functionality, he said.

The two styles of helmets offered the same protection and were roughly the same price, Holte said. Both met the specifications of the National Fire Protection Association, the federal Occupational Safety and Health Administration and the American National Standards Institute.

Jeff Molen, a firefighter and driver at Station 4, said the trial helmet chosen was a little bit heavier on his head, but more comfortable. It fit his head better, he said.

The helmets employ a composite plastic shell similar to hard hats worn by construction workers. And foam inside softens the blow, Richardson said.

"Pieces of roofing can come down and hit you in the head," Holte said of a fire situation. "It's a literal lifesaver."

"And people store all kinds of things in their attic that could fall through and hit you," Molen said.

The eye shield on a helmet protects a firefighter on a ladder near a window when the heat blows it out, Richardson said.

The new helmets would have about a 10-year lifespan, unless cracked, melted or otherwise damaged, Holte said. The firefighters' current helmets would be used for live fire training, as long as they are not damaged.

Two years ago, a firefighter's ankle was broken when he was pinned by falling debris during a large warehouse fire.

His helmet was cracked, too, but he received no head injury, Richardson reported.

"It can protect you in even the worst situations," he said.

Holte expects to receive the helmets about six weeks after ordering.

The new fire engine would replace the pumping engine at Station 5 on South 40th Street. It was due to be replaced in 2025 after 15 years on front-line duty, Holte said.

Holte wants to pay when the city orders the truck because a prepay discount will save the city $31,000. By prepaying now, the city also locks in the price. The manufacturer has announced a 6% increase for its products starting Nov. 1, Holte said.

Pierce Manufacturing makes each engine custom to the purchaser. The company has told Holte the manufacture of Springdale's will take 29 months.

And the new pumping engine still will be Chrome Yellow, Holte assured. The color alone makes the Springdale equipment unique, he said.

Richardson said tests have proven yellow is the easiest to see.

"It's the same reason school buses are yellow," Molen added.

The new pumper engine also would include a larger water tank and a shorter hose bed, so the firefighters wouldn't have to reach so far when grabbing a hose, he said. The nine engines Springdale employs hold from 500 to 750 gallons of water.

The Fire Department also expects delivery in late November of a new pumping engine for Station 4 on Elm Springs Road. The new Engine 4 will come equipped with ladders, noses, axes and racks for breathing apparatuses. The total cost -- which has been paid -- was $629,900, Holte said.

The current Engine 4 will rotate to reserve status, remaining fully outfitted and operational, he said.

The new Engine 5 would come without the equipment package, Holte said. When Engine 5 rotates to reserve status, the current reserve Engine 5 will be sold, and its equipment moved to the new engine.