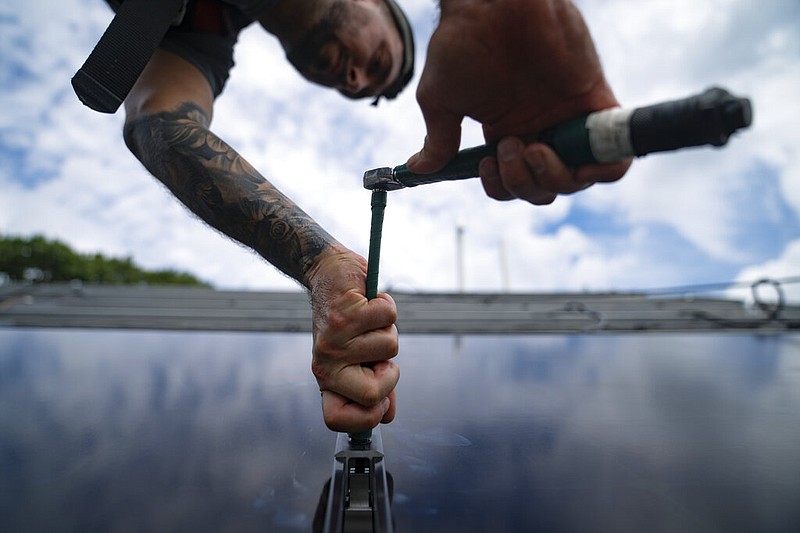 An employee of NY State Solar, a residential and commercial photovoltaic systems company, installs an array of solar panels on a roof in this Aug. 11, 2022 file photo. (AP/John Minchillo)

The Little Rock School District is taking beginning steps to tap the power of the sun.

The School Board for the 22,000-student school system last week directed Superintendent Jermall Wright and his staff to solicit proposals from energy service companies to audit or evaluate the district's energy consumption and propose how to meet at least some of those energy demands with solar power.

The board authorized the request for proposals at the urging of Central High School's Young Leftist Club and others who first appealed to the board last November to consider alternative, sustainable energy sources.

The students made the appeal after district voters approved a financial plan to raise $300 million for building projects, including the new Marian G. Lacey Kindergarten through Eighth Grade School, a new traditional high school in northwest Little Rock, and a new classroom wing at Central High. Other projects include auditorium and field house upgrades and new roofs and windows at some campuses.

Wright, who has been the district's chief executive since July 1, on Thursday thanked the students for their continued advocacy for renewable energy.

"We know you are not going to let us not move forward on the issue," Wright told the students.

School Board member Ali Noland, who made the motion and an amended motion to authorize district staff to put out the request for proposals, said after the vote that getting to help the students reach their goal of moving the district to solar energy "has been the best thing I've done on the board."

"The Central High students who are leading this effort deserve a great deal of praise and respect for their work," Noland said.

"Other Arkansas school districts have already adopted solar energy because it just makes sense financially and is more environmentally responsible," she continued. "I'm glad that the students and the community are pushing the district to move forward with this."

The Batesville School District is a frequently mentioned Arkansas school system that has in the past few years used solar panels to provide electricity for school operations.

Kelsey Bailey, the Little Rock district's chief deputy for business and operations, said the district has taken steps in recent years to conserve energy, including the installation of LED lighting, new school roofs and more efficient heating and air conditioning systems. But a solar energy contract reached with an energy service company will likely be a significant one, requiring a district commitment of 20 to 25 years, he said.

Bailey also said there are more than a dozen companies identified as qualified by the Arkansas Energy and Environment Department and those will be the companies to receive the request for proposals.

Noland amended the goal section of the proposal request. The initial goal called for the district's selected alternative energy plan to offset as many kilowatt hours as possible. That was amended to add a goal of saving the district money.

The request for proposals was also changed to notify vendors that the district is open to energy saving ideas that could benefit the district in addition to solar power.

Several audience members addressed the board on the energy matter prior to the vote.

Scott Hamilton said he had been in the energy business for 32 years. He said the issue is complex and urged the board to "take your time" in making the decisions.

"Make sure there is a why, that you understand the why and you agree on the why," Hamilton said.

Central student Tamara Tyler told the board that the world's climate crisis is the most important issue of her generation. "Why are we waiting?" she asked about board action.

Another Central student Heather Jennings called for a move to solar panels. "Switching to solar has no downsides," she said.

Those board members voting for the amended motion were Noland, Greg Adams, Sandrekkia Morning, Michael Mason, and Leigh Ann Wilson. Those opposed were Evelyn Callaway and Norma Johnson. Vicki Hatter, who attended the meeting by Zoom, did not vote on the final proposal.