No time to dwell: Turning to Tide, Hogs say of focus 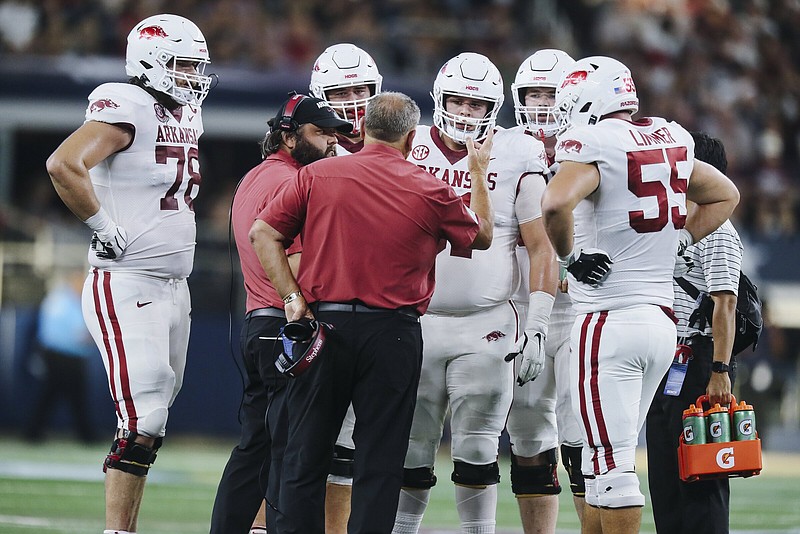 ARLINGTON, Texas -- The Arkansas Razorbacks didn't waste any time turning their attention to Alabama after a 23-21 loss to Texas A&M on Saturday night at AT&T Stadium.

"But I thought the team, we fought hard. We needed to make stops, we made stops. We got the offense tracking on the field to give us a shot to win. There's a lot of positives. But just too many errors. And when you play in the SEC, one play, two plays, they're the difference between a win and loss."

The Arkansas-Alabama game will be televised by CBS and with a 2:30 p.m. kickoff on Saturday at Reynolds Razorback Stadium in Fayetteville.

Arkansas was No. 21 when the Tide beat the Razorbacks 42-35 last season at Bryant-Denny Stadium.

"I think we'll bounce back," Pittman said. "I really do. I love our kids. They're tough and resilient.

"They know Alabama's got a really good team, and the place will be sold out and rocking in there Saturday.

"A lot of people spent their hard-earned money to come watch us play and we'll be ready to play. They'll be fine. They're hurting right now, but they'll be fine."

Alabama opened SEC play with a 55-3 victory over Vanderbilt on Saturday.

"The game is over. ... We nip this in the bud, and we're looking forward. No need looking in the past."

Junior receiver Jadon Haselwood said losing a tough game to Texas A&M should help the Razorbacks in their preparations for Alabama.

"I'd say this probably put a little chip on our shoulder," Haselwood said. "All we can do is work.

"It's not going to stop. College football is going to keep going. We've got to get better weekly. We can't go down just because we lost. We've got to keep rising up."

Jefferson is one of Arkansas' team captains.

"Just keep encouraging everybody," Jefferson said of his approach this week. "I mean, it happens. It's college football.

"You're not going to be able to win them all. So just make sure the team keeps their eye on the ball, make sure we come together, encourage each other, just keep uplifting each other and make sure the locker room stays positive.

"Nobody's pointing the finger or blaming anyone."

It was the sixth loss of seven or fewer points Arkansas has suffered against Texas A&M since 2014, including three in overtime.

"We can't dwell on it," Haselwood said. "We dwell on it, we're living in the past, and we can't worry about our next opponent.

"We can't go backwards. We've got to keep thriving and striving."

Print Headline: No time to dwell