Remember when dozens of copperheads mysteriously swarmed one tree near Yellville? 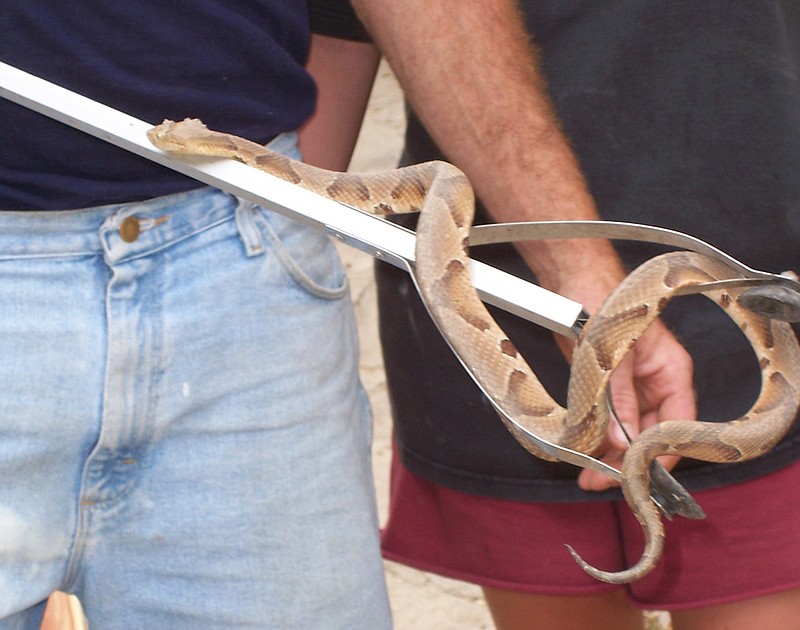 In August 2007, Chuck Miller examines one of the many copperhead snakes that returned to his mountaintop home near Yellville for the third year in a row. (Special to the Democrat-Gazette/Jim Bodenhamer)

The copperheads arrived around dusk, by the slithering dozens. They seemed to rendezvous under a cedar tree about 150 feet from Chuck and Machelle Miller's Ozark mountaintop home between Flippin and Yellville.

The snakes wormed about together for about an hour. Then, abruptly, they disappeared. Miller first noticed on July 20, 2005, when his five pit bulls saw what was happening and did not like it one bit.

A seasoned outdoorsman who had owned pet snakes, Miller was puzzled. Copperheads are known to congregate in the fall before winter hibernation; they gather in the spring to mate. But this was summer. And his house was nearby. He monitored the snakes every evening while standing atop a cedar stump.

Also puzzled was Stanley E. Trauth, then a zoology professor and director of the Electron Microscope Facility at Arkansas State University at Jonesboro. Trauth, who literally wrote the book on Arkansas snakes, heard about the phenomenon from one of Miller's friends.

Trauth and his then-student Robert G. Neal caught and marked 67 snakes in 2005, notching a scale on each belly. In 2005 and 2006, they tagged 26 more with radio-frequency ID chips. They implanted radio transmitters in six snakes.

When one snake lingered in a brush pile, they investigated and found the copperhead and its transmitter inside a speckled kingsnake.

As fall came on, the copperhead crowd tapered. Whatever it was ended.

But in the middle of the next July, they were back, and they massed beneath the same cedar every night for an hour or so.

At least 20 of the marked snakes returned to Miller's yard in 2006, along with newcomers.

Today Trauth is an ASU emeritus professor. He said via email Sept. 19 that research has not yet settled exactly how copperheads cluster like that in summer, but they appear to be dining on cicadas; and Neal has been studying another group near Magnolia for three years.

"There apparently is some connection with the food habits and the activity patterns by the snakes," Trauth wrote. As cicada nymphs emerge from their underground burrows and crawl toward the trees where they will molt and commence their famous male chorusing, snakes feast on the nymphs.

"We still await definitive answers as to the repeated movements of certain snakes around specific trees," Trauth noted.

Gallery: The snakes came back