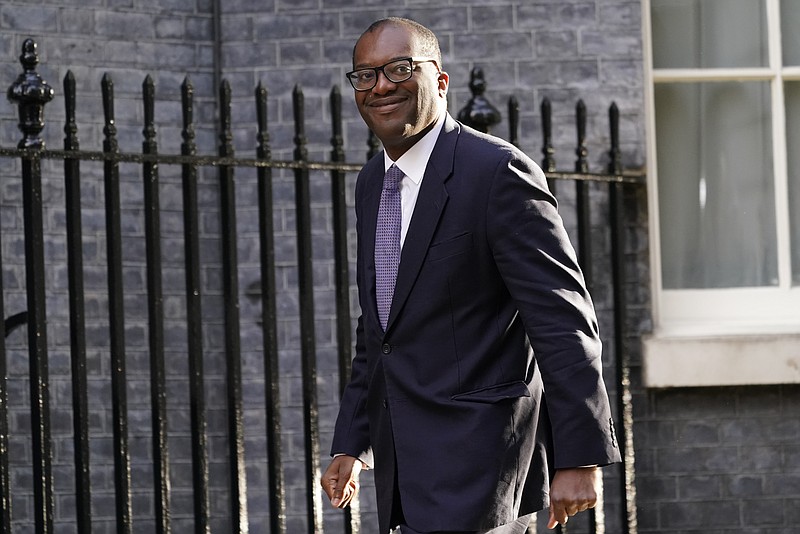 FILE - Britain's Chancellor of the Exchequer Kwasi Kwarteng arrives in Downing Street in London, on Sept. 7, 2022 for the first cabinet meeting since Liz Truss was installed as British Prime Minister a day earlier. Britain’s Conservative government is expected to publish an emergency budget statement Friday, Sept. 23, 2022 outlining how it plans to slash taxes, tame soaring inflation and boost economic growth as a recession looms on the horizon. (AP Photo/Alberto Pezzali, File)

The British pound briefly fell Monday to its weakest level on record against the U.S. dollar as global investors’ resounding rejection of the United Kingdom’s plans for tax cuts and borrowing continued.

The pound has in part been a victim of the dollar’s strength, which is hammering currencies all over the world as the U.S. Federal Reserve raises interest rates to battle inflation. The euro fell below parity with the dollar in the summer. On Monday, China’s central bank fixed the value of the yuan at its weakest level in more than two years, taking steps to manage its slide.

After a historically bad day Friday, the British currency plunged as low as $1.035 early Monday, before recovering to about $1.08, down 0.5% for the day. It also weakened slightly against the euro.

Prices for British government bonds plummeted and yields surged Monday, sending borrowing costs to new highs. The 10-year yield, which influences mortgages, business loans and other types of debt, hit its highest level in more than a decade. It traded at around 4.15% on Monday, double where it was a month and a half ago.

As traders dumped British assets, analysts have said the government’s plan to quickly grow the economy through deregulation and tax cuts, which will require tens of billions of dollars in additional borrowing at a time of rising interest rates and high inflation, was a gamble.

On Friday, Kwasi Kwarteng, who has been chancellor of Britain’s Exchequer for about three weeks in Prime Minister Liz Truss’ new government, announced a series of cuts to income taxes, reduced levies on home purchases and scrapped a plan to increase the corporate tax rate. There were dozens of other policy measures, which come on top of an expansive, costly plan to cap the cost of electricity and gas for households and businesses.

Despite the breadth of new measures, the government did not have the Office for Budget Responsibility, an independent watchdog, assess the polices and provide updated economic and fiscal forecasts.

“It was perhaps the lack of reassurances about fiscal responsibility that tipped the market over the edge,” said Jane Foley, a strategist at Rabobank.

On Sunday, government officials projected confidence in their tax-cutting agenda, despite the market’s negative reaction to the initial plans. Kwarteng said there would be “more to come” in his drive to have “people retain more of their income.” The steep decline in the pound has led some analysts and economists to speculate that the Bank of England may need to intervene by raising interest rates before its next scheduled policy meeting in November.

“All sterling traders this morning will be sitting on the edges of their seats,” said Foley, referring to the moves in the British pound. “This is a very uncomfortable position, particularly for the Bank of England and, of course, for the government, too.” The government’s plans have been criticized for pulling too far in the opposite direction to the goals of the central bank. Policymakers at the Bank of England have been raising interest rates in an effort to bring down inflation, which is near a 40-year high.

But the government’s policies could add to longer-term inflation pressures if people spend the savings on tax and energy bills, and the measures don’t sufficiently grow the supply side of the economy. This has added to bets that the central bank will have to raise interest rates even higher than previously thought.

For weeks, analysts have been warning of trouble for the British pound. Britain’s record-high current account deficit, which means that the value of imported goods and services exceed its exports and other income from overseas investments, means that the country relies on the generosity of international investors.

But these investors could lose confidence in Britain.

“The government does appear extremely chaotic right now,” Foley said. “The markets don’t believe that their policies are going to be good for the U.K. economy. Unless it can pull something out of the hat to enhance its credibility, then sterling is going to remain pretty vulnerable.”

SHORING UP THE YUAN

China has made it more expensive to bet against the yuan with derivatives, ramping up support for the currency as it slides toward its weakest level against the dollar since the 2008 global financial crisis.

The People’s Bank of China said Monday that it will impose a risk reserve requirement of 20% on currency-forward sales by banks. Since August, the central bank has sought to limit the yuan’s losses through its daily reference rate and demanded that lenders set aside more foreign exchange as reserves.

The decline of the yuan is accelerating as divergence grows between a dovish People’s Bank of China and an aggressive U.S. Federal Reserve. China’s pushback mirrors that of Japan, with both seeking to limit the damage from their weakening currencies, with the risks that further declines may lead to ever more capital outflows and drag down the region.

“By imposing the risk reserve requirement, the People’s Bank of China aims to slow the pace of depreciation, but it will unlikely turn the tide,” said Peiqian Liu, an economist at NatWest Markets. “The currency weakness is in line with most major currencies and the broad dollar strength.” The onshore yuan fell 0.4% to 7.1588 per dollar Monday, taking its year-to-date loss to more than 11%. If it dips past 7.1854 per dollar, it would be the weakest since early 2008.

The additional risk reserve requirements would make it expensive for traders to buy foreign-exchange through forwards or options, a move that may curb bearish yuan bets. The central bank had lifted the risk reserves for foreign-exchange forward trading from zero to 20% in 2015, before lowering it two years later and raising it again in 2018.

The People’s Bank of China scrapped it in 2020 after the yuan rebounded.

The central bank Monday also set its fixing at weaker than 7 per dollar for the first time since 2020, which NatWest’s Liu sees as a signal that it doesn’t intend to defend any specific level. The currency is allowed to move 2% around the daily reference rate, and it got within a whisker of the weak end of the trading band.

Liu Guoqiang, deputy governor of the People’s Bank of China, said earlier this month that the central bank won’t allow a “reasonable, equilibrium and basically stable” exchange rate to be changed while warning traders against betting on specific yuan levels.

The People’s Bank of China has more policy tools at hand to defend the currency, Jingyang Chen, a foreign exchange strategist at HSBC Holdings, said.

“We haven’t seen a lot of signs of meaningful intervention,” Chen said. “If we saw a quick fall in trade weighted yuan, then we might see more direct intervention or another cut to the foreign exchange reserve ratio,” she said.

The United States is a superpower with the world’s largest economy and hefty reserves of oil and natural gas. When it comes to global finance and trade, however, its influence is outsized.

That is because the dollar is the world’s reserve currency — the one that multinational corporations and financial institutions, no matter where they are, most often use to price goods and settle accounts. Energy and food tend to be priced in dollars when bought and sold on the world market. So is a lot of the debt owed by developing nations.

Ro u g h ly 4 0 % of t h e world’s transactions are done in dollars, whether the U.S. is involved or not, according to a study done by the International Monetary Fund.

And now, the value of the dollar compared with other major currencies like the Japanese yen has reached a decadeslong high. The euro, used by 19 nations across Europe, reached 1-to-1 parity with the dollar in June for the first time since 2002.

The dollar is clobbering other currencies as well, including the Brazilian real, the South Korean won and the Tunisian dinar.

One reason is the string of crises that have rocked the globe, including the coronavirus pandemic, supply-chain chokeholds, Russia’s invasion of Ukraine and a series of climate disasters that has imperiled the world’s food and energy supply.

In an anxious world, the dollar has traditionally been a symbol of stability and security. The worse things get, the more people buy dollars. On top of that, the economic outlook in the U.S., however cloudy, is still better than in most other regions.

Rising interest rates make the dollar all the more alluring to investors by ensuring a better return. That, in turn, means they are investing less in emerging markets, which puts further strains on those economies.

The unusual chain of events, which has led to weakened global demand, is making things even worse for countries that might otherwise be able to take advantage of a devalued currency to export more of their own goods, which have become cheaper.

A fragile currency can sometimes work as “a buffering mechanism,” causing nations to import less and export more, Liu said. But today, many “are not seeing the benefits of stronger growth.” Still, they must pay more for essential imports like oil, wheat or pharmaceuticals as well as for loan bills due from billion-dollar debts.

“I can’t remember the last time when the issue was that a strong dollar was a way the United States was exporting inflation, extinguishing some of its own, but by adding more of it around the world,” said Jason Furman, an economics professor at Harvard who was a chief economic adviser in the Obama administration.