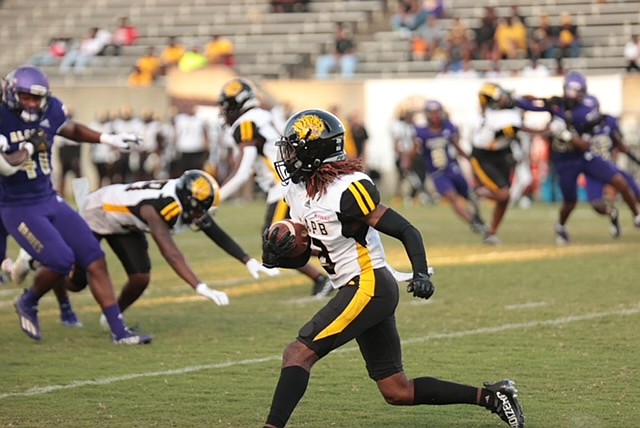 Jewel Fletcher of UAPB returns a kick against Alcorn State on Saturday in Lorman, Miss. (Special to The Commercial/Alcorn State University)

There seems to be a hex surrounding the Southwest Classic for Arkansas.

The good news is that the contract is coming to an end in a couple of years, and the Aggies (who routinely draw more than 100,000 fans to home games) want to go back to a home-and-home series.

The even better news is that the end of the contract with Jerry Jones will make it easier for Arkansas athletic director Hunter Yurachek to ensure there’s not another autumn like this one when there are no Little Rock games for the Hogs. He must realize that the long tradition of Little Rock games — even it it’s just one per season — is an integral part of this program’s rich tradition.

Saturday’s loss prevented Arkansas from starting 4-0 in back-to-back seasons for the first time since 1988-89.

KJ Jefferson rushed for 105 yards and passed for 171, but his ball security mistake changed this game. And now Alabama looms.

Here are the predictions for this week’s games:

Alabama 30, Arkansas 23 — Alabama is off to its usual 4-0 start with three routs and that scare at Texas. The Tide has wins of 55-0 over Utah State, 20-19 over Texas, 63-7 over Louisiana-Monroe and 55-3 over Vanderbilt. Expect Arkansas to play well and hang around until the fourth quarter. In the end, though, the Tide will escape Fayetteville with a victory, just as they escaped Austin on Sept. 10.

Arkansas State 28, Louisiana-Monroe 27 — The Red Wolves are 1-3 following a 29-26 loss at Old Dominion. ASU led 12-0 at the half but was outscored 21-7 in the third quarter. ASU’s offensive line is a real problem. There were eight quarterback sacks on Saturday. Louisiana-Monroe is 2-2 with wins of 35-7 over Nicholls and 21-17 over Louisiana-Lafayette. The losses were by scores of 52-10 to Texas and 63-7 to Alabama. We’ll give a slight edge to the home team.

Austin Peay 25, UCA 19 — UCA is 1-3 following a 35-27 loss at Southeast Missouri. Will McElvain passed for 284 yards for the Bears in the losing cause. Austin Peay lost its opener to Western Kentucky by a final score of 38-27 but has since run off four consecutive victories — 63-0 over Presbyterian, 41-0 over Mississippi Valley State, 28-3 over Alabama A&M and 31-20 over Eastern Kentucky.

Southern 17, UAPB 10 — The Golden Lions are 2-2 following a 38-21 loss at Alcorn State. A Syracuse transfer named Jarveon Howard rushed for 295 yards and four touchdowns for the Braves as they outscored UAPB 28-7 in the second half. The Golden Lions are back on the road this week against Southern University in Baton Rouge. Southern opened the season with an 86-0 victory over Florida Memorial University. It then lost a “money game” to LSU by a score of 65-17 and fell 24-0 to Texas Southern. With two weeks to prepare for this Saturday’s contest, we’ll give Southern the edge.

Ouachita 49, Northwestern Oklahoma 24 — Ouachita moves up to No. 6 in the country in NCAA Division II following its 21-13 victory over previously undefeated Harding at Cliff Harris Stadium on Saturday night. The 4-0 Tigers came into the game ranked No. 9. Harding, the defending Great American Conference champion and the coaches’ preseason pick to win the 2022 title, was No. 7 entering the game. Ouachita’s defense shut out Harding in the second half. The Bisons had 214 yards on the ground in the first half but only 58 during the final two quarters. Ouachita now must make its longest road trip of the year to take on 0-4 Northwestern Oklahoma.

Harding 35, Oklahoma Baptist 9 — In 2019, Harding lost its opener at Ouachita on a last-second field goal and went on to finish 10-1. This is a talented enough team to finish 10-1 yet again and go deep in the NCAA Division II playoffs. The Bisons will work off the frustration of the loss to Ouachita this Saturday at home against Oklahoma Baptist, which is 1-3.

Henderson 32, Southeastern Oklahoma 26 — Henderson was 3-0 and ranked No. 24 in the country going into last Saturday’s game at Magnolia against Southern Arkansas. SAU pulled the upset by a final score of 28-24. Mulerider quarterback O.B. Jones threw three touchdown passes. Then, the SAU defense held Henderson on downs at the Mulerider 25 with 1:38 left in the game. Henderson is back home in Arkadelphia this week against 2-2 Southeastern Oklahoma.

UAM 40, Southwestern Oklahoma 29 — The Boll Weevils are off to a 3-1 start. They beat Arkansas Tech by a final score of 35-14 last Saturday. Weevil quarterback Demilon Brown gets better every week. He carried the ball 17 times for 184 yards and scored three rushing touchdowns against Tech. He passed for another 114 yards. UAM is 3-1 for the first time since 2008. This week’s opponent, Southwestern Oklahoma, is 2-2.

Arkansas Tech 38, Southern Nazarene 34 — Tech is 1-3. Southern Nazarene is 1-3. It’s going to be a rough season for both teams. When in doubt, give the advantage to the home team. This one is being played in Russellville.

Southern Arkansas 42, East Central Oklahoma 31 — The Muleriders are home in Magnolia again this week and filled with confidence following their win over Henderson. Both SAU and East Central enter the game with 2-2 records, but the Mulerdiers appear to have a bit more talent.