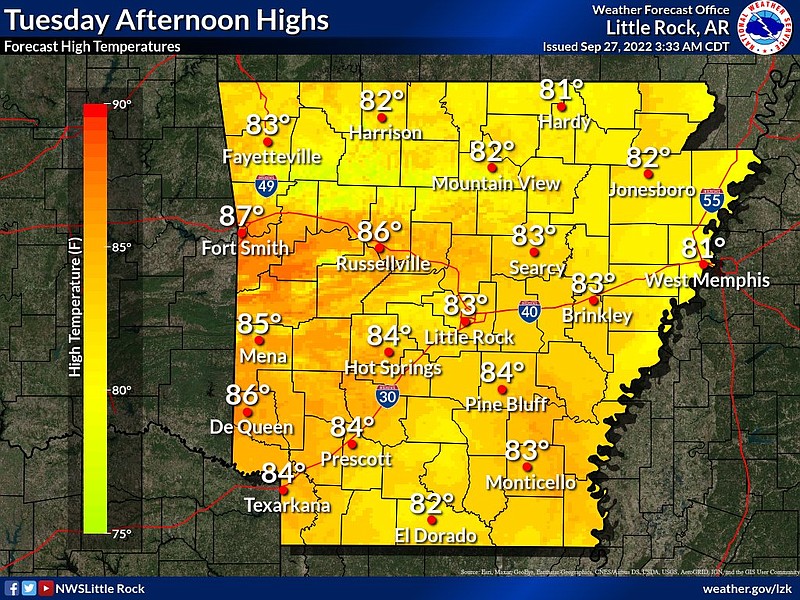 This graphic from the National Weather Service shows predicted high temperatures across Arkansas on Tuesday.

While all parts of Arkansas are forecast to have relief from the heat and humidity this week, the state’s upcoming cooler and drier conditions are expected to elevate fire danger in the coming days, according to the National Weather Service.

Dan Koch, a meteorologist with the weather service in North Little Rock, said a cold front will bring a classic “fall-like” pattern to the state.

He said mild temperatures from the mid 70s to lower 80s are expected for the entire state in the next seven days. Overnight lows in central Arkansas will be in the 50s, and some temperatures will drop into the 40s in the northern part of the state at night. No precipitation is expected at this time, according to Koch.

The meteorologist said a cold front will also heighten dry conditions in Arkansas.

“The air that’s coming down this way, it’s basically originating up in Canada so it’s cooler, it’s drier, we don’t have all of the gulf moisture that normally comes up this way,” Koch said. “That’s one of the reasons we’re so humid during the warmer months is that we have wind flowing up out of the south that’s bringing moisture up over some of Gulf of Mexico."

Elevated fire danger will be a concern Tuesday afternoon as humidity levels drop into the 15 to 25 percent range, according to the weather service. Forecasters say fire danger will remain elevated during the afternoon throughout the rest of the week due to dry conditions and low humidity values.

“Larger things like tree stumps and fallen logs and stuff still have fairly high fuel moisture, and they’ll take longer to dry out, but what we call the ‘fine fuels,’ have low moisture content and low relative humidity. Those kinds of conditions make things a little bit more of a fire hazard, and so I imagine that is a lot of what’s behind the county judge's decision making in placing the burn bans," he said.

The meteorologist said he wouldn’t be surprised if he sees more burn bans go into effect in the next week.

For those that are in counties not covered by a burn ban, Koch recommends people exercise caution when burning falling leaves or fence lines as the weather continues to get colder and drier.

Wind is the biggest factor when it comes to wildfire danger around this time of the year, according to Koch. He said that, fortunately, the state isn’t expected to experience any strong winds during this time.

“Just keep in mind that with the dry conditions, especially with grasses and stuff, it can get a bit out of control pretty quickly,” he said.