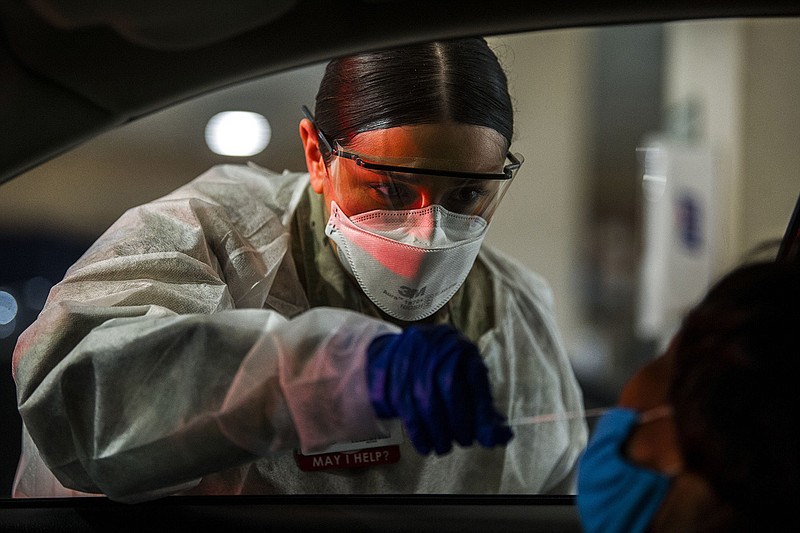 Audriana Morina, with the Arkansas Army National Guard, administers a test for COVID-19 at a drive-thru screening site at UAMS in this file photo from Tuesday, Jan. 4, 2022.(Arkansas Democrat-Gazette/Stephen Swofford)

The number of people reported to be hospitalized with covid-19 in Arkansas rose for the first time in six days Monday even as the state posted its smallest daily increase in cases since late May.

Meanwhile, for the second day in a row, the state didn't report any new deaths from covid-19, leaving the official death toll at 12,080.

State Epidemiologist Mike Cima said last week, however, that the state Department of Health was no longer entering death information on its data system on Saturdays and Sundays.

Deaths that previously would have been entered on those days are now being entered on Mondays, meaning they will show up in the state's numbers on Tuesdays, he said.

After hitting its lowest level in more than two months on Sunday, the reported number of covid-19 patients in the state's hospitals rose Monday by seven, to 259, which was still down by 35 from its level a week earlier.

The state's count of cases rose by 142, which was down by 30 compared to the rise Sunday and by 129 from the one the previous Monday.

It was the smallest daily increase in cases since May 30.

"All in all, I think this reinforces the fact that we are heading down across the board for all age groups," Cima said Monday. "Hopefully it will continue that way for at least a period of time."

He noted that hospitals aren't required to update their numbers with the Health Department on Saturdays and Sundays, although some do.

The numbers used to calculate the totals for those days are from Friday for some hospitals and from Saturday or Sunday for others, he said.

"From Friday and the week prior, we have noticed downward movement there on the hospitalizations," Cima said.

"I am getting more hopeful that we'll see some more pronounced decreases, hopefully this week."

Pulaski County had the most new cases, 21, on Monday, followed by Sebastian County with 14 and Independence County with nine.

Thirty-three counties didn't have any new cases, and 21 counties had only one each.

Already at its lowest level since the week ending June 6, the average daily increase in the state's case count over a rolling seven-day period fell Monday to 474. With recoveries outpacing new cases, the number of cases in the state that were considered active fell by 627, to 6,045, the smallest number since June 9.

Dropping for the third day in a row, the number of the state's virus patients who were reported to be in intensive care fell Monday by six, to 40.

The reported number on ventilators, which didn't change Sunday, fell Monday by three, to 17.