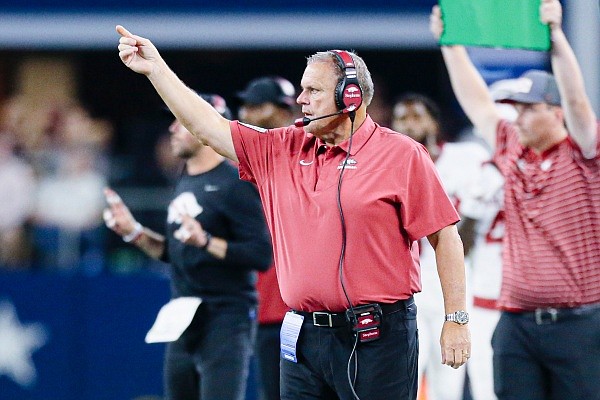 As an ESPN personality spoke on a Little Rock radio program at lunchtime Monday, his intelligence, journalistic expertise, and down-home, southern NASCAR charm were evident.

Marty Smith, perhaps best known for his place with Ryan McGee on the ESPN podcast and SEC Network television show Marty & McGee, was a guest on Justin Acri's and Wess Moore's midday program on KABZ-FM, 103.7. He answered questions with extended and occasionally paragraphical answers. The grammatical accuracy of his comments (forgive the intentional double negatives) exposed his original career as a sportswriter and continued career as a writer of long-form non-fiction.

"He is very smart," Acri said. "There's no doubt about that."

Smith's memoir "Never Settle: Sports, Family, and the American Soul" was published in 2019. His early sports television career was highlighted by ESPN's coverage of NASCAR.

Despite the Arkansas Razorbacks' 23-21 loss to Texas A&M in Arlington, Texas, on Saturday, Smith said these should be high times for Razorback football fans.

"There should be so much optimism," Smith said. "I mean, it don't get any easier with the Tide coming to town, but look, Texas A&M is a really good football team. OK, they lost to Appalachian State, but they turn around and beat Miami, show a lot of resilience. They did a really good job on Saturday, but if I were an Arkansas fan, sure, I'd be disappointed, but I would be as optimistic as any fan base in the country, especially when you look at what was as compared to what is. I would be thrilled, in a general sense, if I was a Hog fan."

Smith said he believes Pittman is an ideal coach for Arkansas and Arkansans.

"I think Coach Pittman is not only a phenomenal person, he is a great coach, and he is the perfect guy for this state," he said. "I don't know how many times I've said this. If you're going to be the head coach at the University of Arkansas, you have to be fully rooted in the tradition of what this is and the passion of the people, because in so many ways, the identity of these people is in that football team. You have got to love it, live it, be rooted in it, and he is and has been since the second he got the job."

After his short radio interview, Smith joined master of ceremonies David Bazzel for an address to the Little Rock Touchdown Club's weekly luncheon crowd at the downtown DoubleTree Hotel.

Among his many memorable interview subjects, he said few surpassed the frank, open honesty expressed by longtime golf star John Daly before an Arkansas football game on a segment named, "Hillbilly Headline."

"John Daly comes on our program, whom I just adore," Smith said. "Talk about authenticity. I care so much about the who of a person, and man, that guy is one of one. We hand him this 'Hillbilly Headline' to read, and Daly sits down on the set, and we're like, 'All right, John. How 'bout you lead us off,' and he goes, 'Boys, I ain't gonna lie; I'm drunk.' We were laughing. Everybody was laughing. I mean, it went crazy."

Smith said he once experienced a subtle moment of clarity during an interview with golfing superstar Tiger Woods, the winner of 15 major championships.

"It was before he won the Masters in 2019, and I asked him, 'Why were you so dominant for so long,' and he said, 'I just want to beat you,' and I said, 'Tiger, it can't be that simple,' Smith said. "He said, 'Marty, I didn't say I wanted to win. I said I wanted to beat you.' That definitely made everyone say, 'Oh,' because he's different. Guys like Kobe [Bryant] and Tiger are different."

"I've done some things that had everybody talking," Smith said. "The most recent was doing a belly flop into the duck pond at Appalachian State on GameDay. That was on TV."