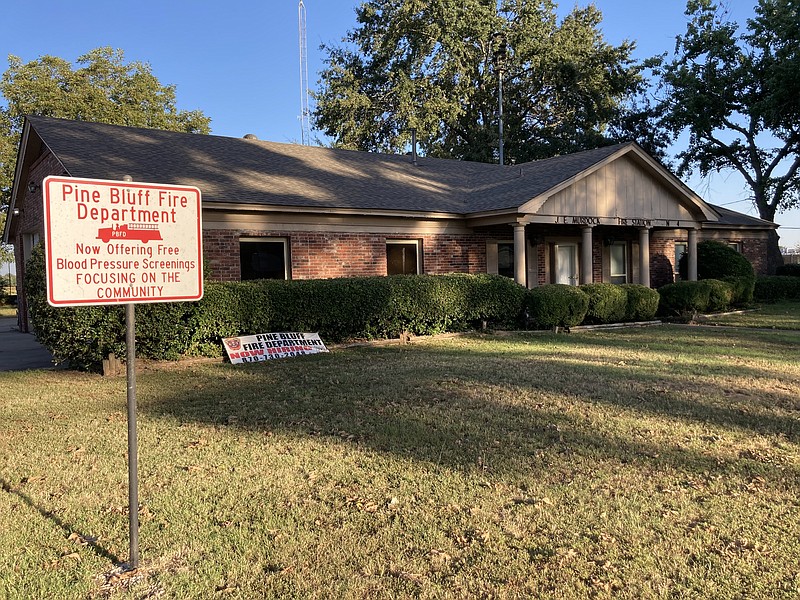 The old fire station on Commerce Road could be the home of a food pantry if the measure is approved by the Pine Bluff City Council. (Pine Bluff Commercial/Byron Tate)

When food pantry director Debra Allen was notified that she would no longer be able to use the old Southeast Middle School for food distribution, she said she knew everything would work out for her because "God's got me."

And, indeed, she may be taken care of.

During a Public Works Committee meeting, Council Member and committee chairman Ivan Whitfield and Council Member Steven Shaner agreed that a new location for Allen should be the vacant fire station at 1201 Commerce Rd. The location, the old Fire Station 4, was replaced by Saracen Casino, which built a new station across the road from its facility.

The specific terms of the legislation will be drafted by the city attorney, and according to Whitfield, First Ward Living Grace Food Pantry would be responsible for all of the utilities going forward. The measure would have to be approved by the full council.

In January 2021, the Pine Bluff Urban Renewal Agency approved the acquisition of the Southeast Middle School at 2001 S. Ohio St. The property that surrounds the old school, as envisioned by Mayor Shirley Washington, will include some 200 affordable housing units in the area.

During the last City Council meeting, a resolution authorizing Washington to enter into an agreement with Nabholz Environmental Services for asbestos abatement services at the former Southeast Middle School was approved. In April, an inspection report was provided to the city that verified asbestos was detected in various materials at the school.

Allen received a hand-delivered notice to vacate earlier this month from the city of Pine Bluff stating she would have to vacate the premises no later than midnight on Dec. 31. The letter also said in addition, an inspection showed that the building contains elements of asbestos and that the mayor's office would contact her regarding the dates the contractor for the city would be on site performing the asbestos removal.

"You will want to be prepared to relocate your items, as needed, to permit the contractor's personnel to perform the removal, as well as for your own protection," read the letter.

Allen was concerned about the interruption of the distributions that she had planned for September and the hundreds of people who receive the food during those distributions.

"She feeds so many people in our community. Sometimes that feeding, it may not affect us or our grandchildren but it affects the needy," said Whitfield, who got with other council members to find Allen a location. "We want to do an ordinance or a resolution -- whatever it needs to be to allow her to move to the old fire station on Commerce Road."

Allen serves approximately 800 vehicles a month in a drive-through. Earlier this year she announced, in addition to her monthly distributions, she would begin serving hot meals to the homeless. She recently raised approximately $40,000 to go toward a new distribution space, but Whitfield said the legislation would give her access to the building rent free or for $1 a year.

"My mindset is if the electric is already on and the water is already on, we leave that on and she has until the end of the year to get the bills transferred," said Whitfield. "If the utilities are already turned off then it will be her responsibility to get everything turned on."

Whitfield said as soon as the legislation passes, Allen can get moved in as soon as possible, allowing the mayor to move forward with her plans for Southeast Middle School.

Allen said food insecurity is taking over households, especially during the pandemic, with families having to make trade-offs between important basic needs or buying groceries and she is grateful to be a servant in that capacity. She said she was overwhelmed by the community response and support and is excited about the future home of the pantry.