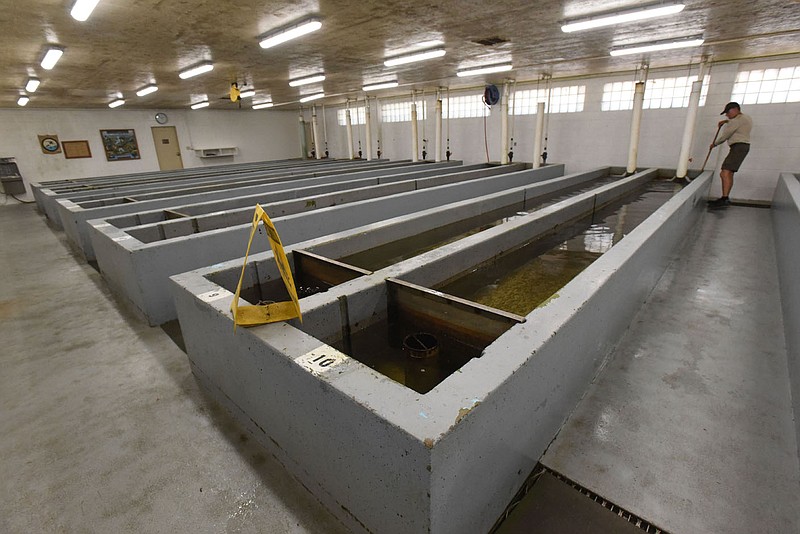 A worker tends to trout tiny to small in size Aug. 25 2022 inside the Norfork National Fish Hatchery. The hatchery produces trout for the White River below Beaver Dam and tailwater streams below other Army Corps of Engineers dams. (NWA Democrat-Gazette/Flip Putthoff)

Sleek rainbow trout that grace the mesh of an angler's landing net at the White River below Beaver Dam weren't born in the clear tailwater stream. Their lives started as tiny eggs miles away at the Norfork National Fish Hatchery in north-central Arkansas south of Mountain Home.

The hatchery is the largest federal trout hatchery in the United States, where some 1.6 to 1.8 million rainbow, brown and cutthroat trout are raised each year. These sought-after fish are stocked mainly in the tailwaters below Beaver, Bulls Shoals and Norfork dams. The hatchery is situated at the base of Lake Norfork Dam.

Free brochures available at the hatchery tell visitors trout are occasionally stocked in other waters in cooperation with agencies in Arkansas and Oklahoma.

Long ago, smallmouth bass and other prized warm water fish put deep bends in fishing poles along the White River. That was before before Beaver, Bull Shoals and Table Rock dams transformed the river into their namesake reservoirs. Norfork Dam on the North Fork of the White River forms Lake Norfork. The U.S. Army Corps of Engineers built the dams through the 20th century. Beaver was the last dam to be completed in the mid-1960s.

Water released close to the bottom of the lakes to produce electricity is too cold for warm water species. The smallmouth bass fishery that anglers loved was lost.

To make up for that loss, Norfork National Fish Hatchery opened in 1957 to raise trout and create cold-water fisheries. Today trout thrive in the chilly water that flows from the base of the dams. Water temperature in the Beaver tailwater is around 55 degrees even in summer. It's an ideal temperature for trout.

Trout from the hatchery are stocked about once a month. More fish are stocked in spring and summer when the most people go fishing.

Visitors are welcome to take a self-guided tour of the hatchery from 7 a.m. to 3 p.m. daily to see trout of all sizes in long concrete raceways inside and outside the hatchery building. Newly hatched fry inside are barely the size of a pencil point. Outside, trout 10 pounds and larger fin in a couple of the raceways.

It takes a mind-boggling amount of water to raise these trout. Cold water comes from deep in Lake Norfork. It flows through the hatchery at a rate of 25,000 gallons per minutes, reads information panels at the visitor center. The spring-fed North Fork of the White River, Bryant Creek and other tributaries flow into Lake Norfork.

When that cold water is released from the hatchery, it flows into Dry Run Creek. The fast-flowing stream is a marquee catch and release trout destination for young anglers. Big trout are stocked in the creek. Youths 16 and younger accompanied by an adult, or mobility impaired anglers, may fish in the stream. Imagine the glee on the faces of youngsters when their first-ever fish is a trophy rainbow trout. They may leave Dry Run Creek as life-long anglers.

Bait can't be used in the stream. Only lures with a single barbless hooking point are allowed.

For adults, stellar trout fishing can be found nearby downstream from Lake Norfork Dam in the North Fork of the White River and the White River below Bull Shoals Dam. Camping, lodging, guided fishing trips and walk-in fishing access are all close to Norfork National Fish Hatchery.

To get there from Mountain Home, drive south for 12 miles on Arkansas 5 to Salesville. Bear left at the Y onto Arkansas 177. Go 2 miles to the hatchery. 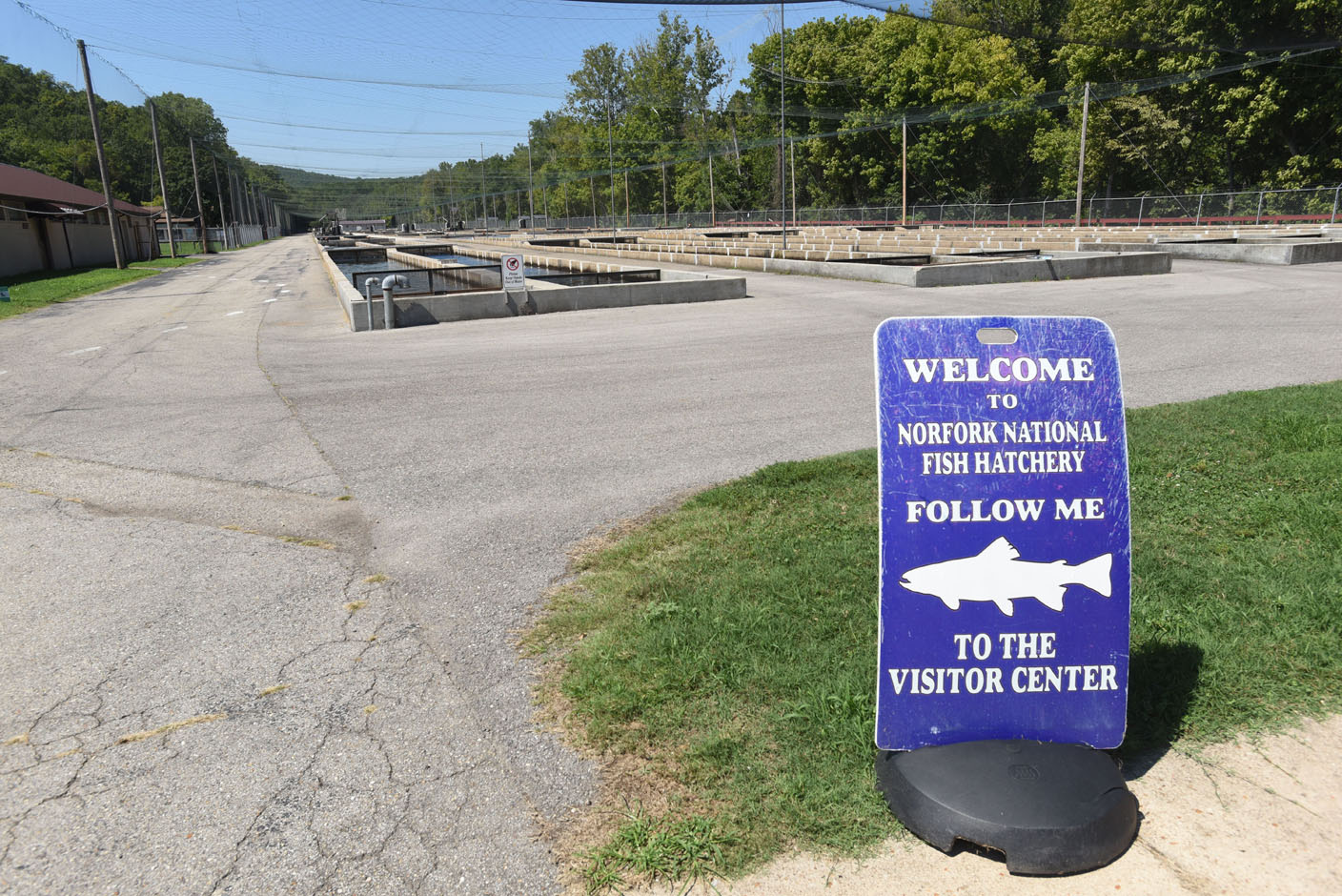 Visitors are welcome at the Norfork National Fish Hatchery at the base of Lake Norfork Dam south of Mountain Home. (NWA Democrat-Gazette/Flip Putthoff)