Musselman: Patience will be needed with hoop Hogs 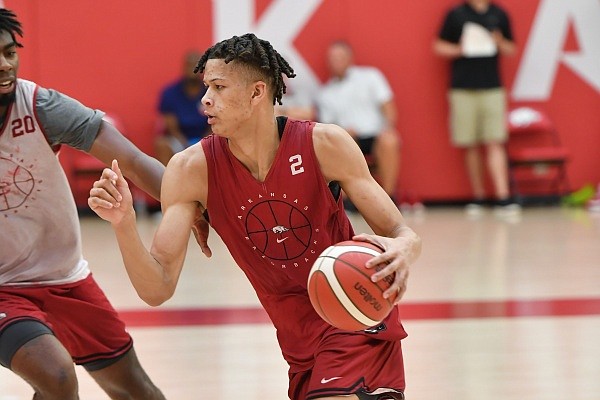 Arkansas forward Trevon Brazile drives to the lane Wednesday, July 27, 2022, during practice in the Eddie Sutton Men’s Basketball Practice Gym on the university campus in Fayetteville.

FAYETTEVILLE -- Eric Musselman, going into his fourth season as basketball coach at the University of Arkansas and seventh as a college head coach, has arguably his most talented roster with three McDonald's All-Americans in guards Nick Smith and Anthony Black and forward Jordan Walsh.

But with six freshmen and sophomore forward Trevon Brazile, it's also the youngest team Musselman is preparing for a season.

The roster must seem especially inexperienced to Musselman given his background as a professional coach, including as an NBA head coach with Golden State and Sacramento.

Along with five transfers, the Razorbacks have 11 newcomers.

Arkansas' lone seniors are forwards Kamani Johnson and Jalen Graham. Johnson joined the program as a transfer from the University of Arkansas at Little Rock and redshirted during the 2020-21 season.

Junior guard Davonte "Devo" Davis is the only Razorback going into his third season playing for Musselman.

"I've got to have a little more patience with this group maybe than some other groups," Musselman said Monday before the Razorbacks held their first practice of preseason training camp.

There aren't fifth-year transfers on Arkansas' roster such as Jimmy Whitt during the 2019-20 season, Jalen Tate in 2020-21 or Stanley Umude, Chris Lykes and Trey Wade last season.

"You tell them once or twice and it gets implemented," Musselman said of fifth-year seniors. "With younger players and a newer group, we're repeating ourselves a lot. More so than any team I've ever coached.

"With that comes a little bit of patience, and hopefully there will be growth from September to October. We've got to get a lot better than where we are."

The Razorbacks got a jump on training camp by having 10 full-scale practices in late July and early August before they traveled to Spain and Italy, where they went 4-0 in exhibition games.

Since returning from the tour, the Razorbacks had been limited to four hours of practice each week in accordance with NCAA rules.

Now the Razorbacks can practice 20 hours per week leading into the season.

Arkansas hasn't released its schedule, but based on game contracts obtained through Freedom of Information Act requests, the Razorbacks' regular-season opener will be against North Dakota State on Nov. 7 in Walton Arena.

"It took me a while to realize I was one of the older guys on the team," said guard Ricky Council, a junior from Wichita State who was the American Athletic Conference's Sixth Man of the Year last season. "It's a young team and Coach said he's not used to it, so I know he makes his own adjustments with that.

"But at the end of the day, we're just going to have to buy in. He's used to coaching older guys, so I've just got to be mature."

Brazile, a 6-10 transfer from Missouri, gives the Razorbacks a newcomer with SEC experience.

"I'm still an underclassman," Brazile said. "But me having a season of SEC basketball under my belt, I feel like what little knowledge I have I can try to shed on these guys."

During the portion of Monday's practice open to the media, Davis made a teaching point to his teammates during a drill.

"I know that Devo's one of the most experienced players in the SEC," Musselman said before the European tour. "He's the one guy that I have a really good comfort zone for, who he is as a player."

Musselman, who has a 73-28 record at Arkansas with back-to-back NCAA Tournament Elite Eight appearances, said he's working to have more patience in practice.

"My wife [Danyelle] reminds me walking out the door that each day at practice you're going to see some turnovers and to be patient," Musselman said. "And that the last few years of us doing this, our teams have always gotten better and to keep that in mind."

"The staff is great," Musselman said. "Keith Smart is probably one of the most patient men that I've ever been around. So he helps a lot.

"Gus has a great demeanor and kind of a California, laid-back approach. "Coach Ruta is a younger guy. The only one that's not probably patient is me.

"We have a staff text thread that we're in and Coach Smart does a good job of putting things in perspective."

Brazile said the training camp practices will be a carryover of what the Razorbacks did in the summer.

"We've been practicing since we got here, so that's nothing new, that's not going to change," Brazile said. "It's just going to be a little longer.

"But during our training camp, our extended practices, I think we just need to have a lot of energy. Games are coming up soon, so I think high energy and high enthusiasm would be good for us right now."

Council said the Razorbacks know what Musselman expects from them.

"He's going to want intensity the whole time and everything will be good," Council said.

Musselman's fiery style was on display during Monday's practice, notably when he pointed out to some scholarship players during a defensive drill they weren't showing as much intensity as walk-on guard Cade Arbogast.

Musselman said that if he feels he's about to get overly agitated, he'll seek out Dave Richardson, the Razorbacks' strength and conditioning coach.

"That's my outlet right now, is to go find out with those [weighted] jackets they wear how many miles they're putting in and try to get my mind off [mistakes in practice]," Musselman said. "We'll get better. We've just got to keep repeating."

The Razorbacks are focusing more on drills than scrimmaging in practice.

"I think what happens is you drill, then you go live," Musselman said. "And if they lose that execution and are falling back into some habits that maybe we haven't taught, then you've got to go back to the drills.

"I think it's up to the team how quickly you can get into live, and then is that live segment just an up and back?

"Is it a live segment where you can go three, four trips up and down the floor? That'll depend on our execution and how much we're following scheme on both sides of the ball."