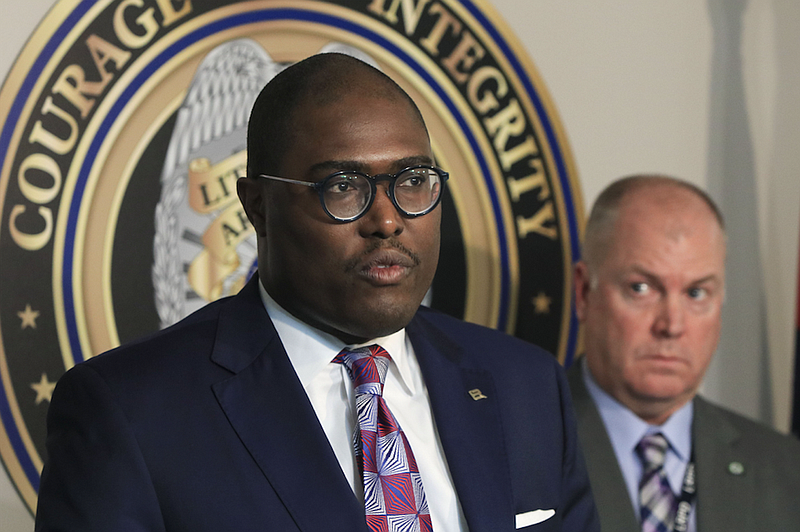 With the first round of the Little Rock mayoral election six weeks away, city officials have yet to name a permanent police chief, nor have they released a list of finalists under consideration for the position.

In May, following the announcement that then-Police Chief Keith Humphrey would step down, Mayor Frank Scott Jr. said he intended to appoint a new police chief before the Nov. 8 election in which Scott is seeking a second term.

Responding to questions about the search via email Monday, Scott's spokesman Aaron Sadler wrote, "We are currently working through the process of identifying finalists who will then be scheduled for interviews in the coming weeks."

Humphrey resigned effective May 20 after three years in charge of the department. He previously served as police chief in Norman, Okla. and beat out three other finalists for the Little Rock job in 2019.

In light of his resignation, then-Assistant Chief Crystal Young-Haskins was tapped to serve as interim chief, but she left the department in June. As a result, the interim-chief role was handed to Assistant Chief Wayne Bewley.

While overseeing changes such as outfitting officers with body-worn cameras, Humphrey clashed with a series of high-ranking subordinates as well as the largest local police union, known as the Little Rock Fraternal Order of Police, Lodge No. 17.

Humphrey's tenure also coincided with an increase in homicides.

A weekly crime report from the Police Department showed that as of Sept. 19, homicides were up 18% so far this year compared to the same period last year. Across the four categories of rape, robbery, aggravated assault and homicide, violent crime overall was down 6%, according to the report.

Steve Landers Sr., one of Scott's opponents in the first round of the mayoral contest, has made crime the focal point of his campaign. The Fraternal Order of Police endorsed Landers in March.

When Humphrey's forthcoming retirement was announced last May, Landers said in a video posted online, "This is one step toward making our community safe."

Last month, Landers told the Arkansas Democrat-Gazette that he had an individual in mind for the police-chief job who has committed to serving if Landers is elected mayor.

However, Landers declined to identify the person at the time.

Also seeking to oust Scott are Greg Henderson and Glen Schwarz. If no mayoral candidate obtains at least 40% of the vote on Nov. 8, a runoff election between the top two will take place Dec. 6.

As of July 1, 21 people had applied to be police chief, among them Assistant Chief Heath Helton.

Sadler did not provide the latest tally of applications when asked for it on Monday.

"While selecting a new Chief before the election is still the goal, the Mayor is grateful for the leadership of Interim Chief Bewley over the last few months," Sadler wrote. "During that time, the City's overall rate of violent crime is 6 percent lower than it was a year ago. We are making progress with our proactive policing efforts and focus on comprehensive approaches to crime prevention, but we know we still have work to do."