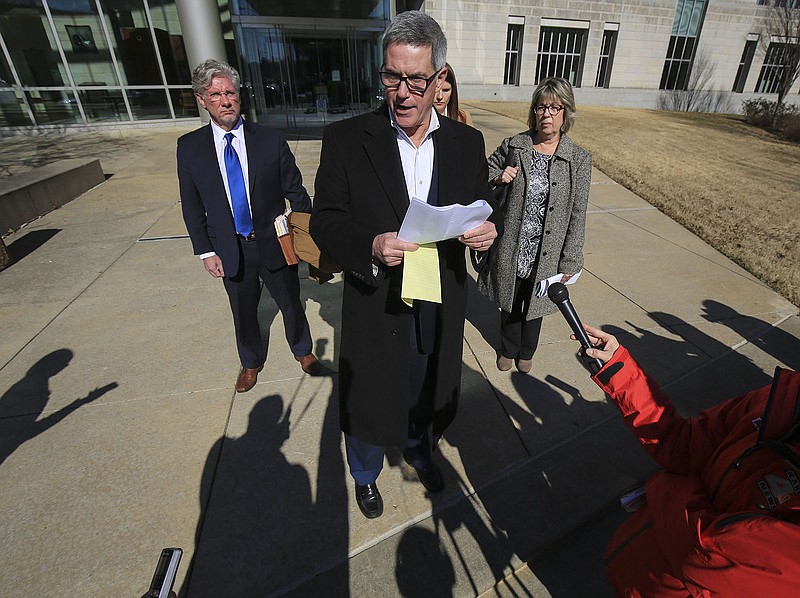 Prosecutors in the federal bribery and wire fraud trial of former state senator and Republican Party chairman Gilbert Baker have asked the judge overseeing the trial to clarify several instructions to the jury pool in hopes of securing a conviction the second time around.

Baker, 66, of Conway, was indicted in 2019 following accusations that he acted as a middleman in an effort to bribe former Faulkner County Circuit Judge Michael Maggio, who was running for a seat on the Arkansas Court of Appeals.

The U.S. Attorney's Office in Little Rock filed a pretrial motion Friday to reconsider jury instructions pertaining to how jurors may consider evidence of uncharged conduct in deciding the matter. Acting U.S. Attorney Michael Gordon asked in the filing that the jury be informed that evidence of campaign finance violations, which Baker has not been charged with, may be used as proof of intent on Baker's part.

Baker was accused of bribing Maggio to lower a jury award in a wrongful death lawsuit filed against nursing home owner Michael Morton. Maggio pleaded guilty to bribery and was sentenced to 10 years in prison. Morton was not charged. Both men testified for the government in Baker's trial.

In July 2013, Maggio lowered a $5.2 million jury verdict against Greenbrier Nursing and Rehabilitation Center to $1 million. His action occurred July 10, the day after 10 $3,000 checks written by Morton arrived at the home of Baker, a friend and political ally of Maggio. The checks were made out to political action committees that were primarily helping Maggio's campaign for a seat on the state Court of Appeals.

The lawsuit had been filed against the nursing home by the family of 76-year-old Martha Bull of Perryville, who died in 2008 about two weeks after being admitted for rehabilitation for a stroke and an abdominal illness.

Maggio and Morton testified in Baker's trial last year. At various times during Maggio's rambling and often contradictory testimony, the former judge said emphatically that he was bribed but at other points said he didn't know a bribe had been offered.

Maggio was released early from prison last year after serving less than half of a 10-year sentence following his January 2015 guilty plea to a bribery charge in the same matter.

In Friday's filing, Gordon, along with Assistant U.S. Attorney Julie Peters, who is prosecuting the case, expressed reservations over the previous jury instruction telling jurors they could consider evidence put forth of campaign finance laws being broken as "background" or "context" in deciding Baker's innocence or guilt in the bribery and wire fraud counts.

In the proposed jury instruction, the filing asked that the jury instruction be clarified to say the jury "may consider this evidence as proof of Baker's intent, preparation, plan, knowledge, or the absence of mistake," in deciding Baker's innocence or guilt on the federal charges against him.

According to the filing, the U.S. intends to present evidence in Baker's retrial that the former Republican Party fundraiser began raising funds for Maggio's aborted campaign for the Arkansas Court of Appeals, as well as for Arkansas Supreme Court Justice Rhonda Wood's race for that seat, outside of the 180-day window state law allows for such fundraising, and that he attempted to hide his actions by funneling the contributions through a series of political action committees that he controlled.

The filing also asked that Chief U.S. District Judge D. Price Marshall Jr., who is presiding over the trial, instruct the jury that evidence of exculpatory statements made by Baker previously -- if proven false -- may be used to consider whether the evidence points to "a consciousness of guilt."

"The false exculpatory statement instruction is aimed at pretrial fabrications," the filing said, "on the theory that the innocent do not fabricate to avoid being accused of a crime."

According to the filing, the U.S. intends to introduce evidence that Baker lied in a civil deposition to the Arkansas Ethics Commission when he made comments intended to demonstrate his innocence of the conduct claimed in the 2019 indictment.

"The Eighth Circuit has held that where a defendant has made statements intended to demonstrate his innocence that conflict with other evidence," the filing said, "the jury may infer that the statement was false and that the falsity indicates consciousness of guilt."

Assistant U.S. Attorney Allison Bragg said Monday the U.S. Attorney's Office could not comment on pending litigation. Baker's attorney, Blake Hendrix, could not be reached for comment Monday. As of Monday night, Marshall had not ruled on the motion.