Protests flare in 1st call-up since WWII by ADAM SCHRECK and JON GAMBRELL The Associated Press | September 27, 2022 at 7:04 a.m. 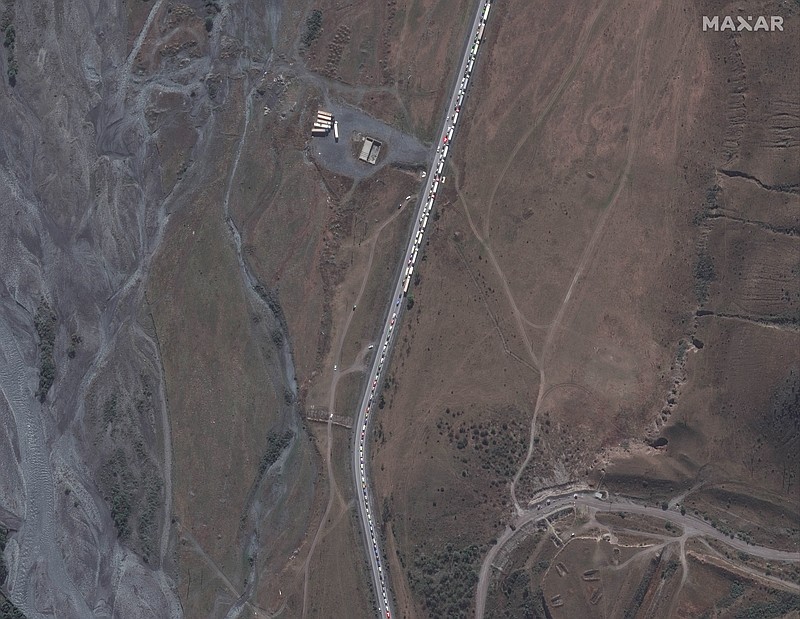 The shooting comes after scattered arson attacks on enlistment offices and protests in Russian cities against the military call-up that have resulted in at least 2,000 arrests. Russia is seeking to bolster its military as its Ukraine offensive has bogged down.

In the attack in the Siberian city of Ust-Ilimsk, 25-year-old resident Ruslan Zinin walked into the enlistment office saying "no one will go to fight" and "we will all go home now," according to local media.

Zinin was arrested and officials vowed tough punishment. Authorities said the military commandant was in intensive care. A witness quoted by a local news site said Zinin was in a roomful of people called up to fight and troops from his region were heading to military bases today.

Protests also flared up in Dagestan, one of Russia's poorer regions in the North Caucasus. Local media reported that "several hundred" demonstrators took to the streets today in its capital, Makhachkala. Videos circulated online showing dozens of protesters tussling with the police sent to disperse them.

Demonstrations also continued in another of Russia's North Caucasus republics, Kabardino-Balkaria, where videos on social media showed a local official attempting to address a crowd of women.

Concerns are growing that Russia may seek to escalate the conflict -- including potentially using nuclear weapons -- once it completes what Ukraine and the West see as illegal referendums in occupied parts of Ukraine.

The voting, in which residents are asked whether they want their regions to become part of Russia, began last week and ends today, under conditions that are anything but free or fair. Tens of thousands of residents had already fled the regions amid months of fighting, and images shared by those who remained showed armed Russian troops going door-to-door to pressure Ukrainians into voting.

"Every night and day there is inevitable shelling in the Donbas, under the roar of which people are forced to vote for Russian 'peace,'" Donetsk regional governor Pavlo Kirilenko said Monday.

Russia is widely expected to declare the results in its favor, a step that could see Moscow annex the four regions and then defend them as its own territory.

Kremlin spokesman Dmitry Peskov said Monday that no date has been set for recognizing the regions as part of Russia but it could be just days away.

Jake Sullivan, the U.S. national security adviser, said Russia would pay a high, if unspecified, price if it made good on veiled threats to use nuclear weapons in the war in Ukraine.

"If Russia crosses this line, there will be catastrophic consequences for Russia. The United States will respond decisively," he told NBC.

Elsewhere, the British government on Monday slapped sanctions on 92 businesses and individuals it says are involved with organizing the referendums in occupied Ukraine. U.K. Foreign Secretary James Cleverly called the votes on joining Russia "sham referendums held at the barrel of a gun." He said they "follow a clear pattern of violence, intimidation, torture and forced deportations."

Putin and his Belarusian counterpart Alexander Lukashenko, meanwhile, held an unannounced meeting Monday in the southern Russian city of Sochi and claimed they were ready to cooperate with the West -- "if they treat us with respect," Putin said.

Turkish Foreign Minister Mevlut Cavusoglu said Monday that Putin had told Turkey's president last week that Moscow was ready to resume negotiations with Ukraine but had "new conditions" for a cease-fire.

The Kremlin last week announced a partial mobilization -- its first since World War II -- to add at least 300,000 troops to its forces in Ukraine. The move, a sharp shift from Putin's previous efforts to portray the war as a limited military operation, proved unpopular at home.

Thousands of Russian men of fighting age have flocked to airports and Russia's land border crossings to avoid being called up. Protests erupted across the country, and Russian media reported an increasing number of arson attacks on military enlistment offices.

Ukrainian President Volodymyr Zelenskyy on Monday once again decried the Russian mobilization as nothing more than "an attempt to provide commanders on the ground with a constant stream of cannon fodder."

In his nightly televised address, Zelenskyy referenced ongoing Russian attempts to punch through Ukrainian defense lines in the eastern industrial heartland of the Donbas, a key target of Moscow's military campaign.

"Despite the obvious senselessness of the war for Russia and the occupiers' loss of initiative, the Russian military command still drives [troops] to their deaths," Zelenskyy said.

On Monday, the Ukrainian military said in its regular Facebook update that Moscow was focusing on "holding occupied territories and attempts to complete its occupation of the Donetsk region," one of two that make up the Donbas. It added that Ukrainian troops continued holding Russian troops at bay along the frontline there.

Meanwhile, the first batches of new Russian troops mobilized by Moscow have begun to arrive at military bases, the British Ministry of Defense said Monday, adding that tens of thousands had been called up so far.

Zelenskyy said Monday on Facebook that the Ukrainian military is pushing efforts to take back "the entire territory of Ukraine," and has drawn up plans to counter "new types of weapons" used by Russia. He did not elaborate.

An overnight drone strike near the Ukrainian port of Odesa sparked a massive fire and explosion, the military said Monday. It was the latest drone attack on the key southern city in recent days and hit a military installation, setting off ammunition. Firefighters struggled to contain the blaze.

New Russian shelling struck near the Zaporozhzhia nuclear power plant, according to Zelenskyy's office. Cities near the plant were fired on nine times by rocket launchers and heavy artillery.

Local Ukrainian officials said Monday evening that the strikes had wounded three civilians in the town of Marhanets, across the Dnieper River from the plant.

Russia also kept pummeling Ukrainian-held territory in the country's east, parts of which have seen ramped-up shelling and missile strikes since Ukraine's ongoing counteroffensive made sweeping gains there this month. At least seven civilians, including a 15-year-old girl, were killed Monday in a rocket attack on the city of Pervomayskiy in the northeastern Kharkiv region, local officials reported.

Farther south, Ukrainian officials reported that on Monday evening, a Russian missile destroyed a civilian airport in the eastern city of Kryvyi Rih, Zelenskyy's birthplace. The regional governor, Valentyn Reznichenko, said that while there had been no casualties, the airport had been knocked out of commission.

In Ukraine's industrial heartland of the Donbas, four civilians were wounded Monday after a Russian strike slammed into apartment blocks in the city of Kramatorsk, its mayor said on social media.

Kramatorsk is one of the two largest Ukrainian-held cities remaining in the Donbas and is home to the headquarters of Ukrainian troops there.

In the town of Izium in eastern Ukraine, which Russian forces fled this month after a Ukrainian counteroffensive, Margaryta Tkachenko is still reeling from the battle that destroyed her home and left her family close to starvation with no gas, electricity, running water or internet.

"I can't predict what will happen next. Winter is the most frightening. We have no wood. How will we heat?" she asked.

Information for this article was contributed by Yuras Karmanau, Lori Hinnant, Joanna Kozlowska and Yesica Fisch of The Associated Press. 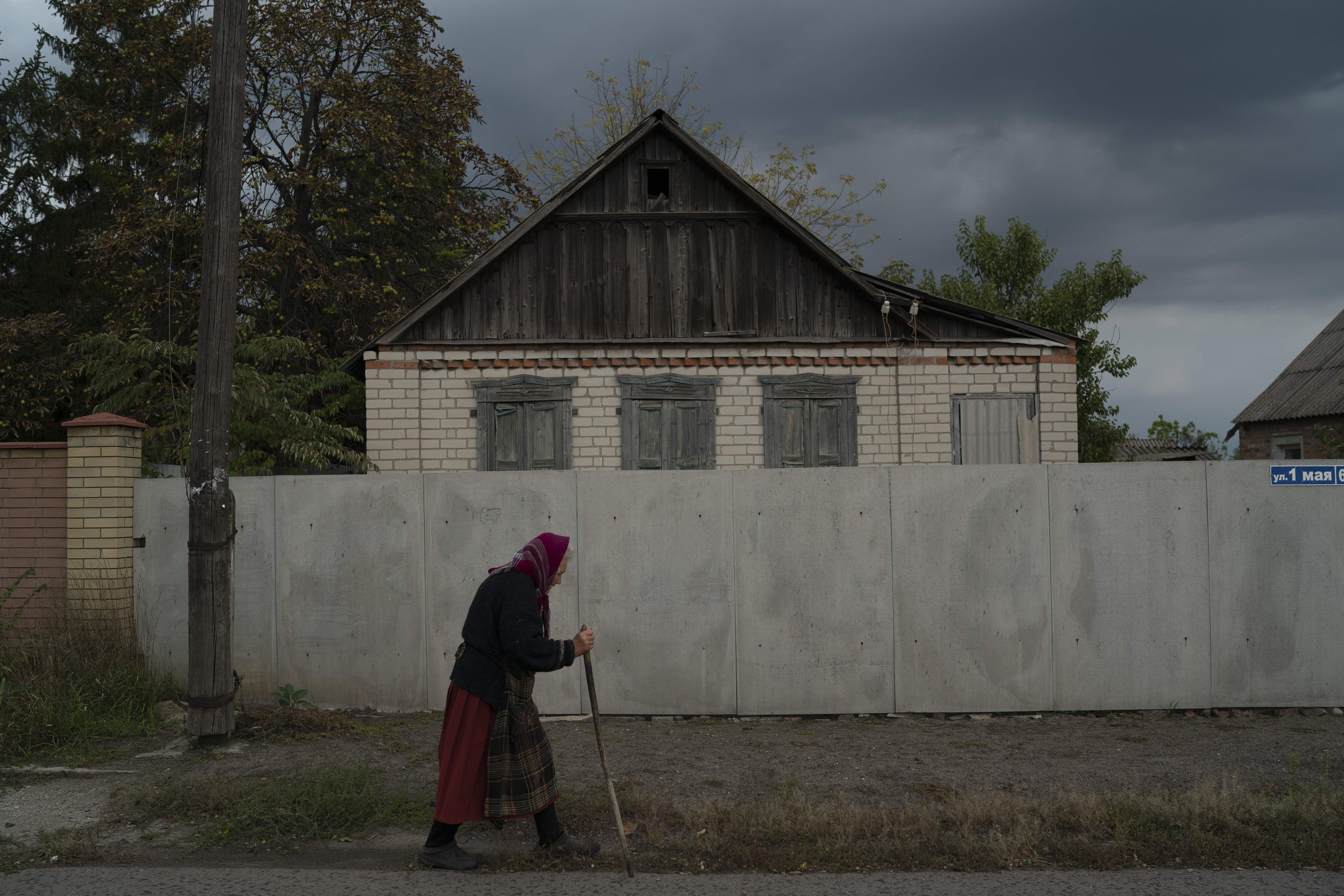 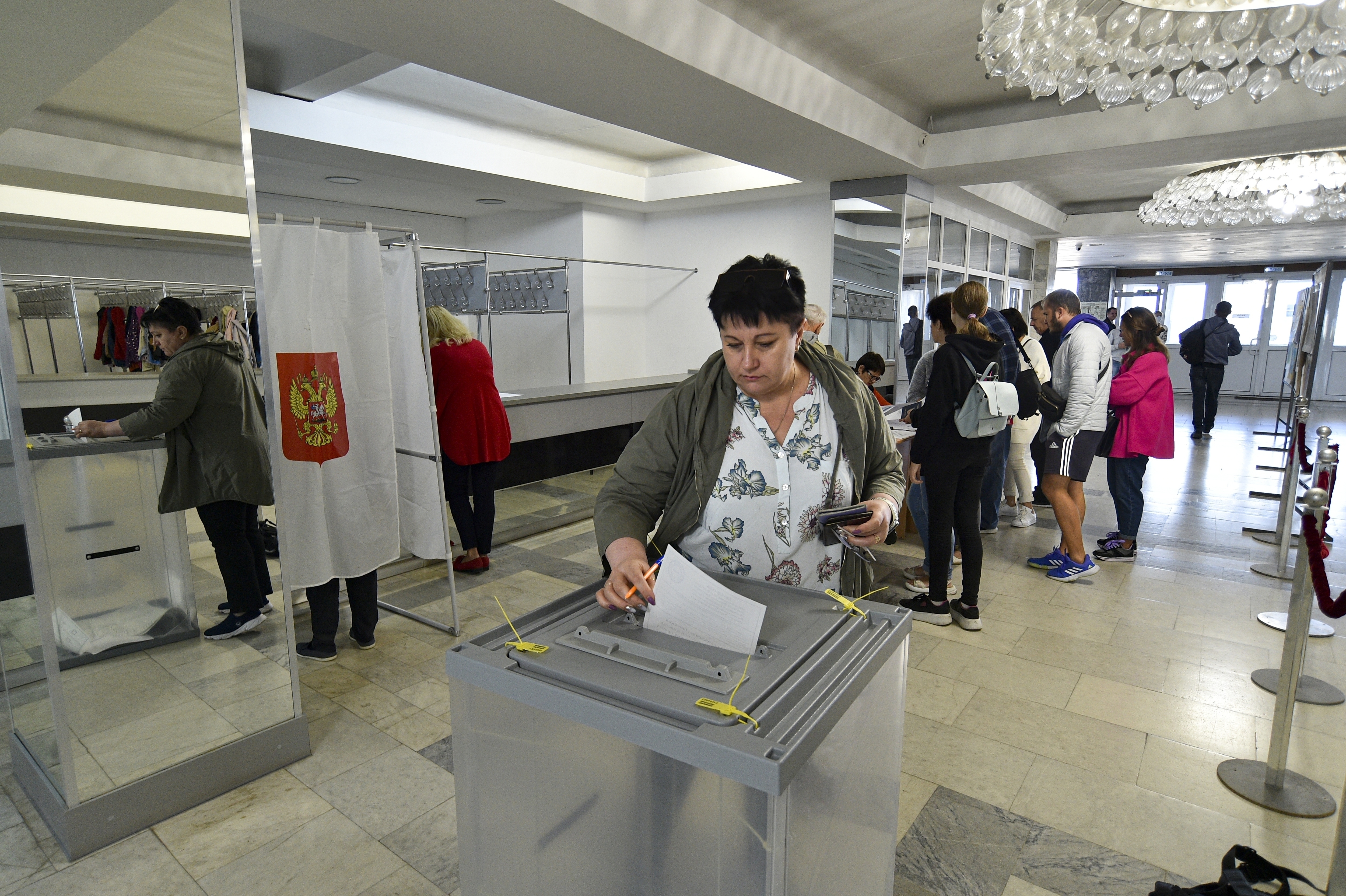 FILE People from Luhansk and Donetsk regions, the territory controlled by a pro-Russia separatist governments, who live in Crimea, vote during a referendum in Sevastopol, Crimea, Friday, Sept. 23, 2022. Voting began Friday in four Moscow-held regions of Ukraine on referendums to become part of Russia. Polls also opened in Russia, where refugees from regions under Russian control can cast their votes. (AP Photo, File) 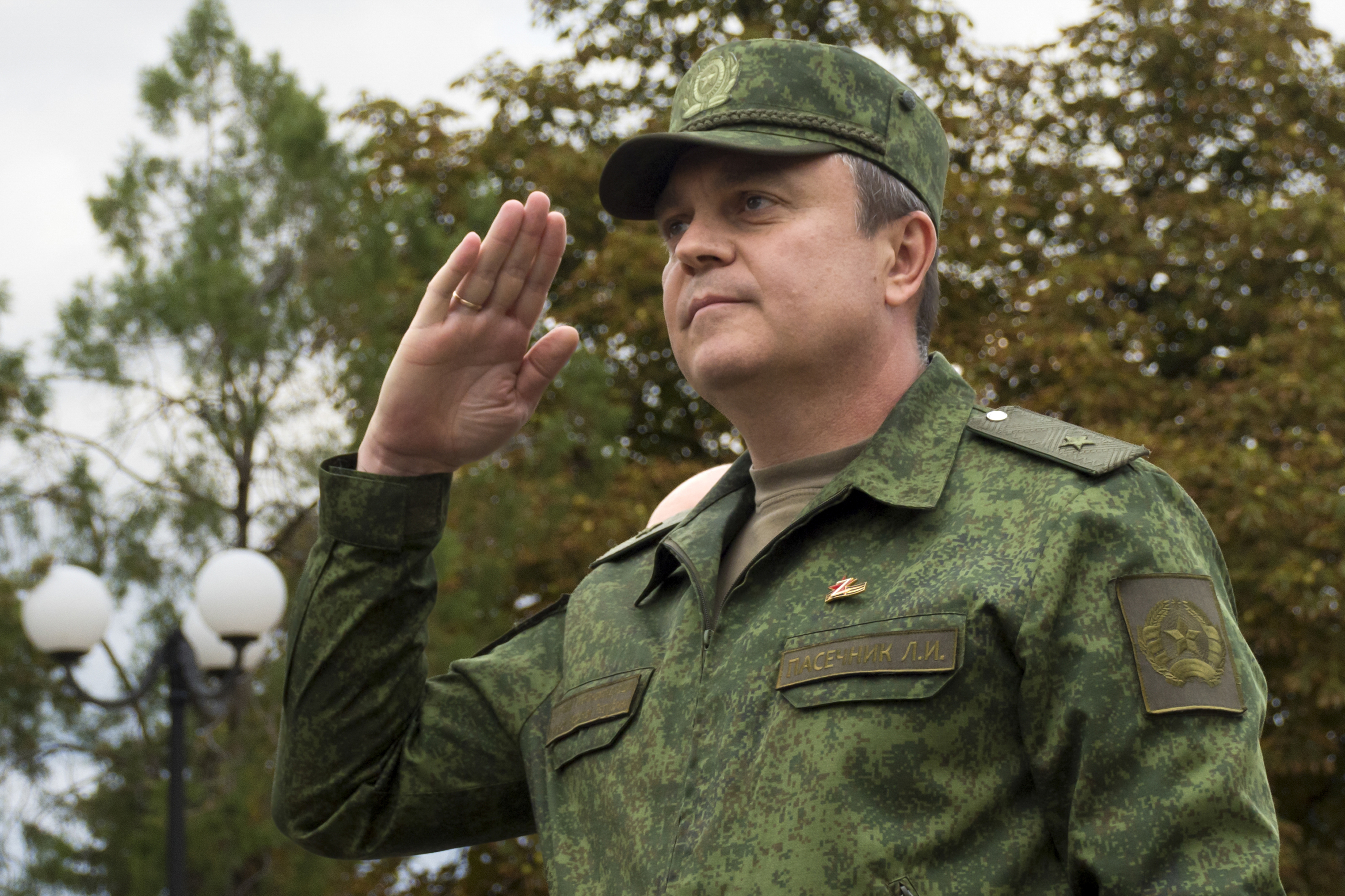 Luhansk People's Republic controlled by Russia-backed separatists salutes while attending a laying ceremony during opening a monument to the Young Guards "Unconquered" in Krasnodon after restoration, in Krasnodon, Ukraine, Monday, Sept. 26, 2022. Voting began last Friday in four Moscow-held regions of Ukraine on referendums to become part of Russia. (AP Photo) 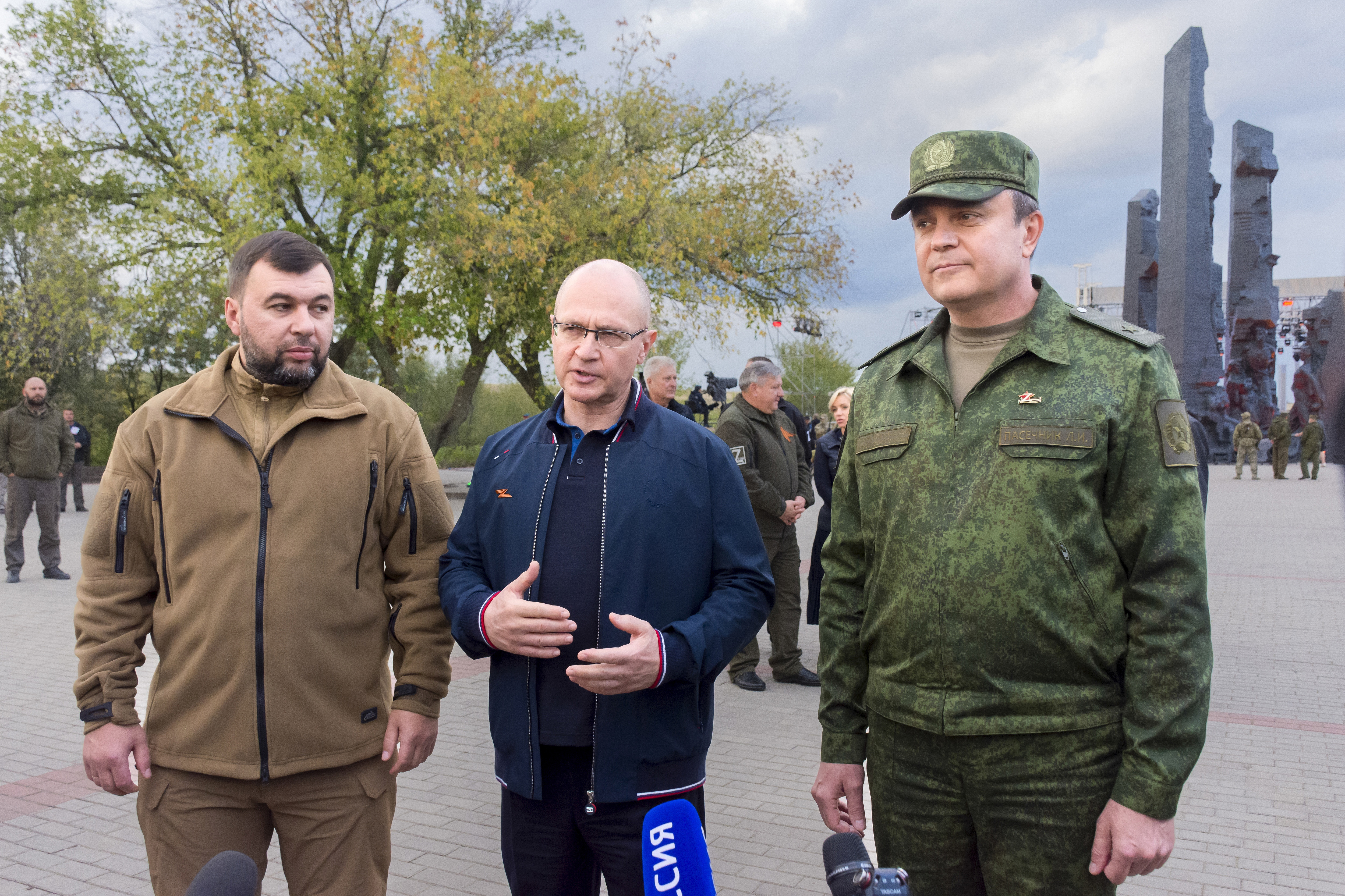 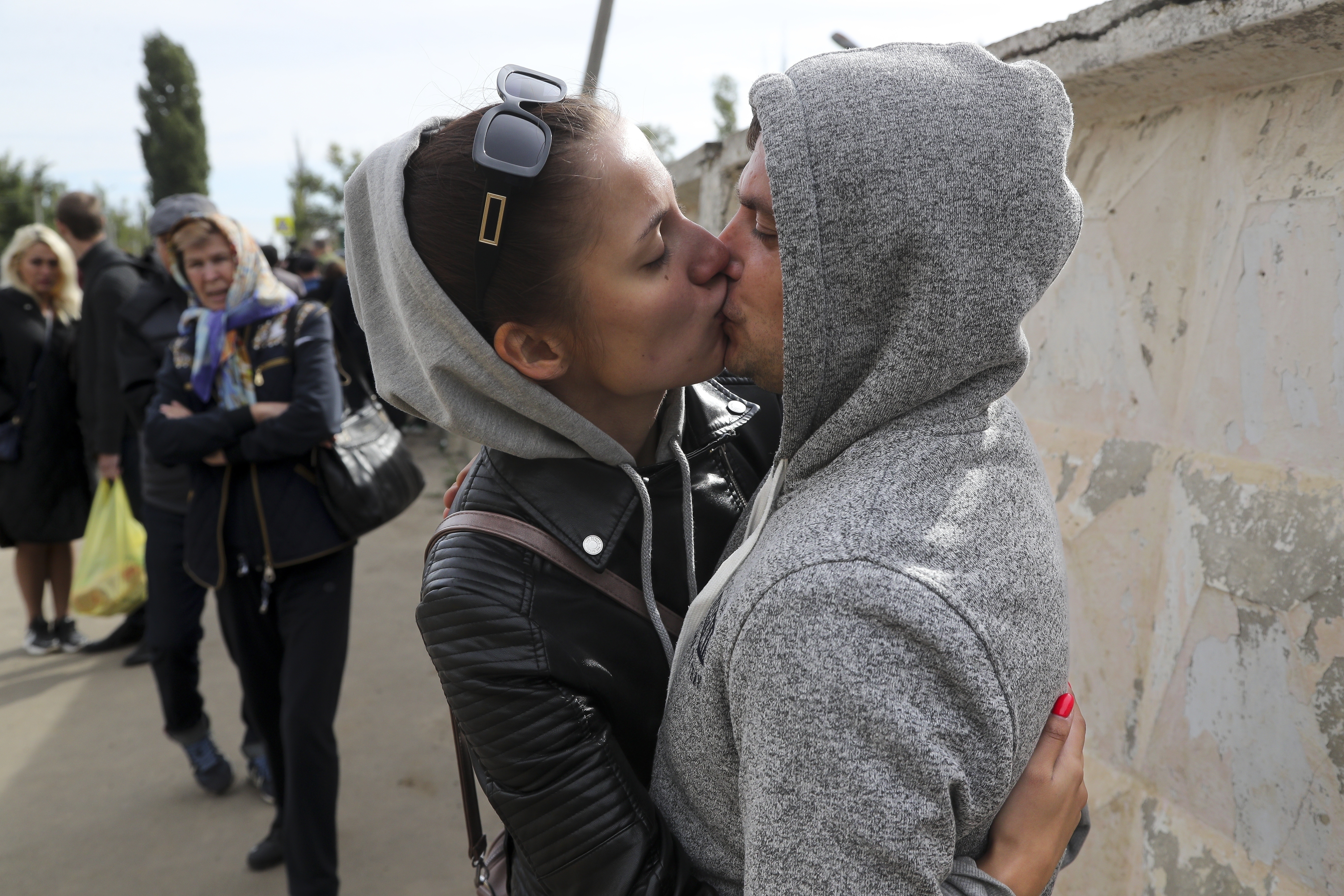 FILE A Russian recruit and his wife kiss and hug each other outside a military recruitment center in Volgograd, Russia, Saturday, Sept. 24, 2022. Russian President Vladimir Putin on Wednesday ordered a partial mobilization of reservists to beef up his forces in Ukraine. (AP Photo, File) 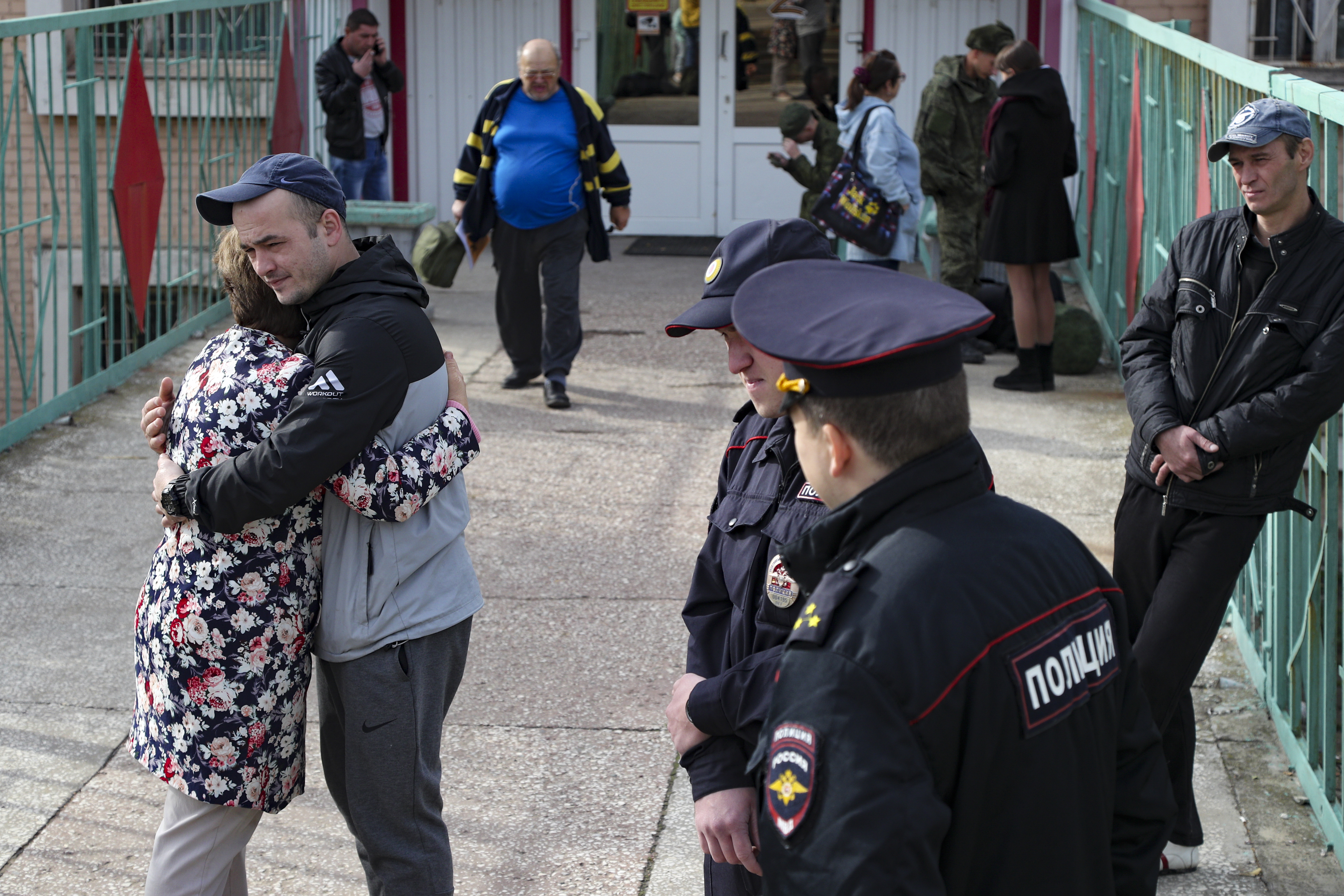 FILE A Russian recruit hugs his mother at a military recruitment center in Volgograd, Russia, Saturday, Sept. 24, 2022. Russian President Vladimir Putin on Wednesday ordered a partial mobilization of reservists to beef up his forces in Ukraine. (AP Photo, File) 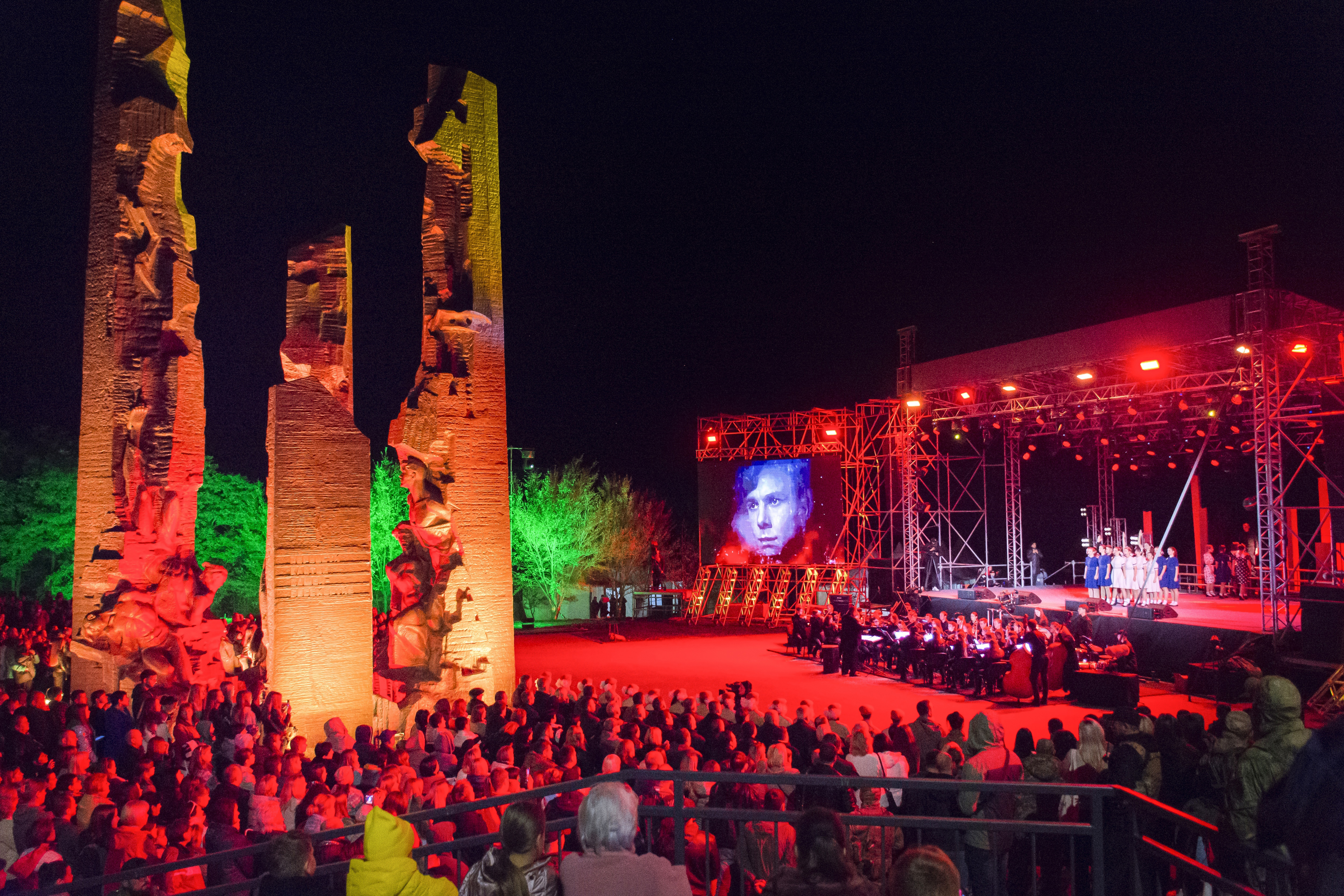 Actors perform during a concert at a monument to the Young Guards "Unconquered" after restoration in Krasnodon, Luhansk People's Republic controlled by Russia-backed separatists, Ukraine, Monday, Sept. 26, 2022. Voting began last Friday in four Moscow-held regions of Ukraine on referendums to become part of Russia. (AP Photo) 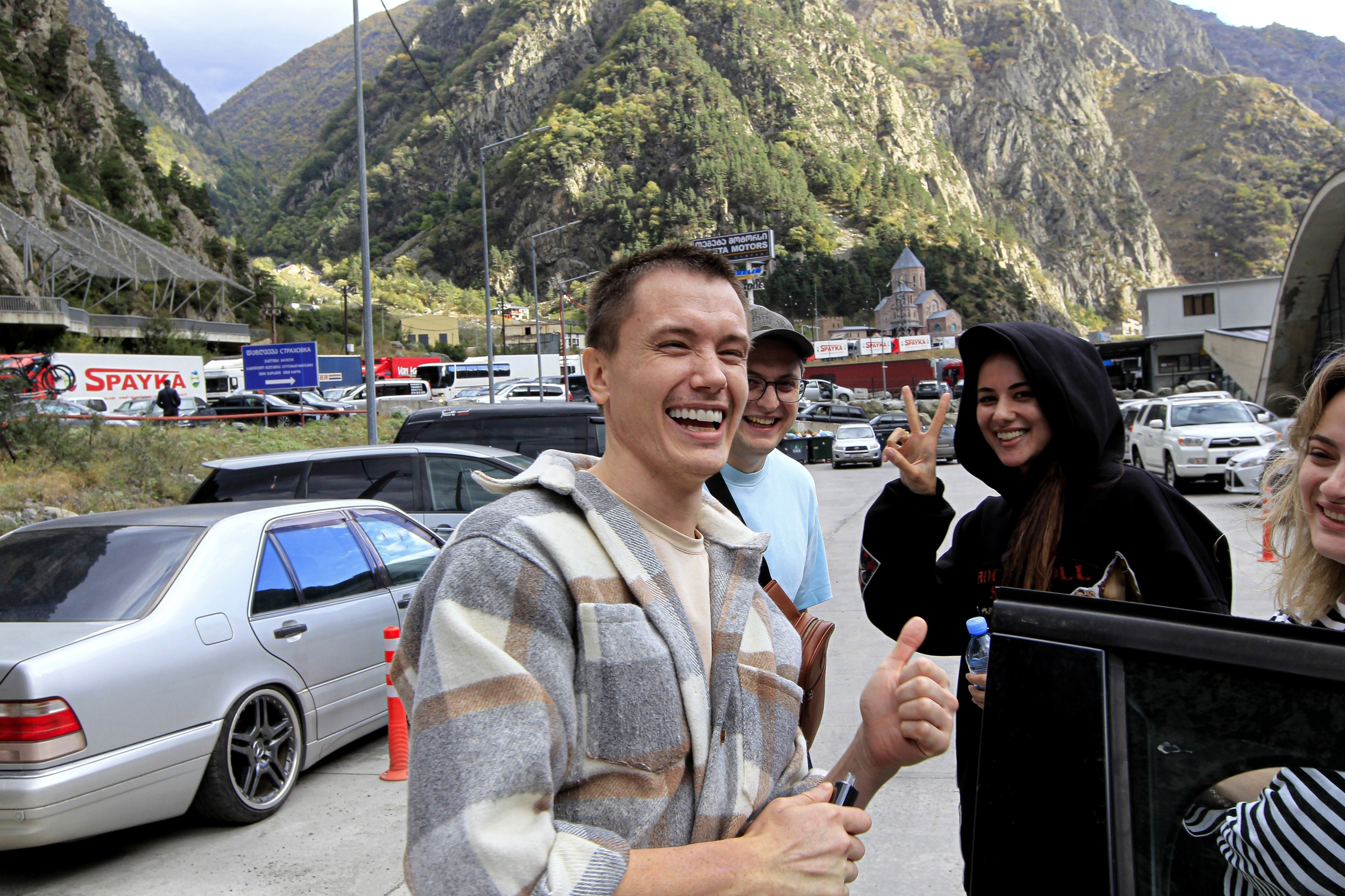 FILE A group of Russians smile at the border crossing Verkhny Lars between Georgia and Russia on Friday, Sept. 23, 2022. Long lines of vehicles have formed at a border crossing between Russia's North Ossetia region and Georgia after Moscow announced a partial military mobilization. A day after President Vladimir Putin ordered a partial mobilization to bolster his troops in Ukraine, many Russians are leaving their homes. (AP Photo/Shakh Aivazov, File) 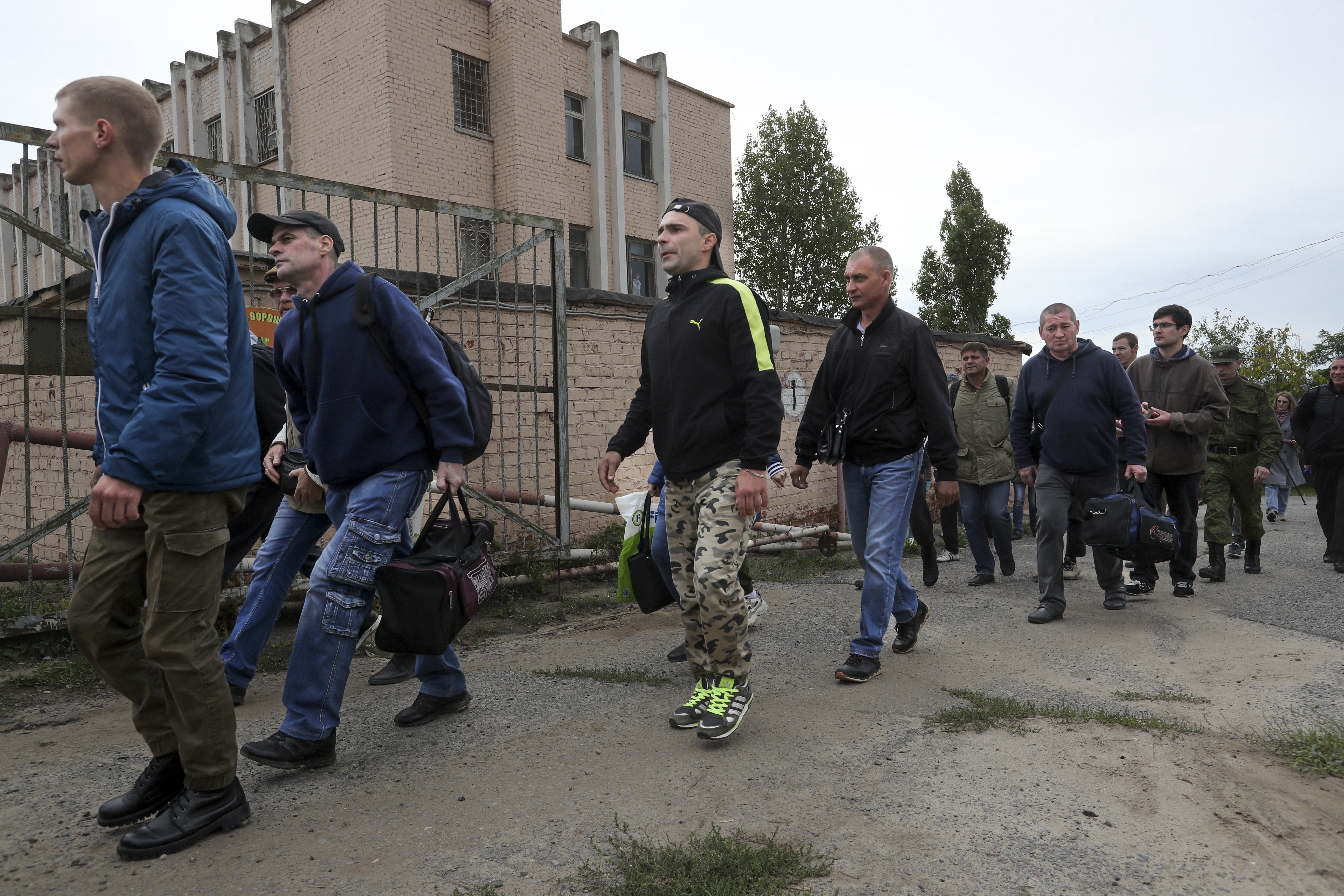