Pulaski County district's budget gets OK in School Board vote 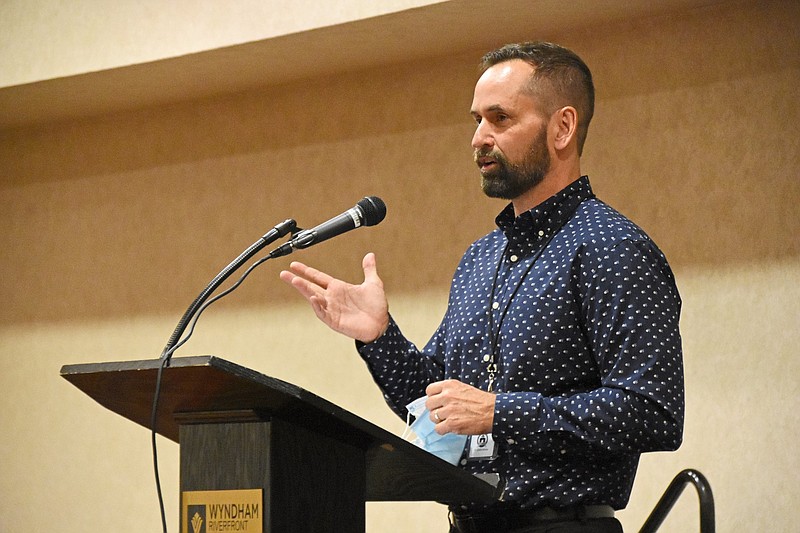 Charles McNulty, superintendent of the Pulaski County Special School District, gives the welcome address during the Teacher of the Year banquet at Wyndham Riverfront Little Rock in this May 13, 2021 file photo. (Arkansas Democrat-Gazette/Staci Vandagriff)

The School Board for the Pulaski County Special School District on Monday voted 6-0 for the 2022-23 school year budget -- but not before questioning employee travel expenses from the year just ended.

The board-approved budget is due to the Arkansas Department of Education by the end of this month.

The district anticipates total state and local revenue of $143,227,114 and projected expenditures of $145,040,006, according to data provided by Jacqueline Rowlett, the district's treasurer.

School Board members Shelby Thomas, Stephen Delaney and Heather Smith questioned district leaders about travel costs that approached $860,000 in the past school year, and included a trip by seven district employees to a conference at Caesars Palace in Las Vegas.

Rowlett and Darnell Bell, the district's director of federal programs, said that some categories of state and federal funding are restricted in how they can be spent. Professional training, which can require travel to conferences, is one of the allowable expenses.

Failure to spend the earmarked money -- which had accumulated in district coffers in the 2020-21 pandemic school year when very little travel occurred -- could have resulted in the district having to return the restricted funding to their federal and state sources, Rowlett and Bell said.

Superintendent Charles McNulty said the funding enabled to district to send staff to conferences that support the district's college and career readiness initiative known as AVID, as well as other services including special education.

He said the district is strategic in the trainings that employees attend -- that the training and travel are specific to the needs of a school. The district doesn't select the sites of the national conferences, he also said, in response to questions about the trip by middle school educators to a Las Vegas conference that he said was approved by Arkansas education leaders.

Board President Lindsey Gustafson said she understood that while the district was motivated to use available funds for travel to avoid having to return the money, she also understood that the conferences and trainings were of value to meet district needs.

Rowlett, in a summary document about the budget, told the School Board that the financial plan is a projection.

"As always, it is important to know that there are many variables that can impact the district's ability to meet its ending balance," she wrote to the board. "Property assessments, collection rates, enrollment, weather, fuel costs, and litigation are just a few of those variables.

"It is also important to know that the district has increased salaries for employees on the average of 3% during the 2020, 2021 2022 school years," Rowlett wrote. "Any future decisions on salary increases and/or non-recurring bonuses could negatively affect the legal fund balance. It is imperative that any salary increases and/or non-recurring bonuses be made without jeopardizing the financial stability of the district."

Print Headline: School budget gets OK in board vote