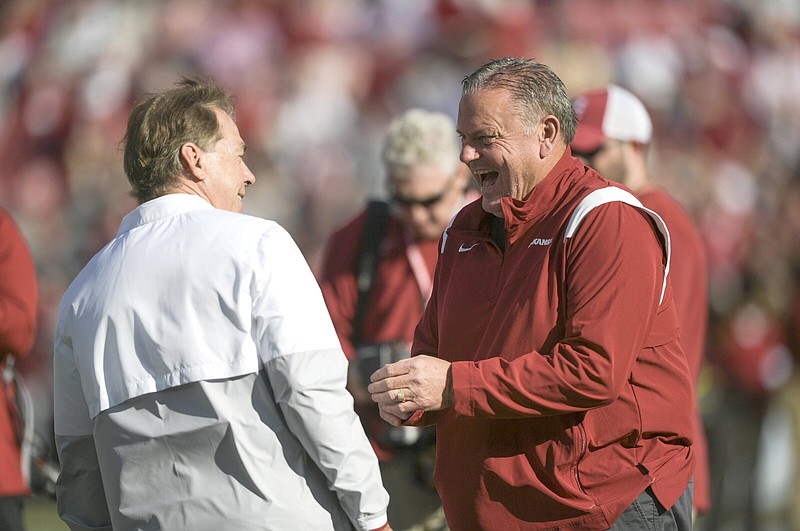 FAYETTEVILLE -- University of Arkansas Coach Sam Pittman talked about a troubling trend through four games, broke down some of the Razorbacks' issues from their 23-21 loss to Texas A&M and peeled back another layer in his personal history with Nick Saban at his weekly news conference on Monday.

Pittman's decision to turn down an offer to join Saban's staff at Alabama in the winter of 2013 is well known in college football circles, as it led to a raise and a promotion to associate head coach just a few weeks after he and buddy Jim Chaney joined the first Bret Bielema staff at Arkansas.

Pittman has previously told local media that he felt he needed to put his ideas about loyalty into practice when staying for a three-year stint with the Razorbacks nine years ago. On Monday, he explained it even further, bringing his mother, Jackie, into the picture.

"You know, I loved it here at the time when I was an assistant coach, as well as now, and I'd given Bret my word and given the kids ... I was their coach and it hadn't been but 5-6 weeks," Pittman said. "I can't remember, but it wasn't very long. I called my mom and she told me she didn't raise a son that would do that. I said, 'Yes, ma'am,' and that was the end of it."

Alabama has won 15 in a row in the series and Pittman hasn't been part of a staff that has beaten the Crimson Tide since 2003, when he was the offensive line coach at Northern Illinois for a 19-16 upset.

One area in which the Razorbacks need an immediate lift is the start of the second halves of games.

Texas A&M scored a touchdown on the first series of the second half in Arlington, Texas, to take a 20-14 lead, and shut out the Hogs 10-0 in the third quarter.

That gave opponents a massive 41-13 edge in third quarter scoring this season. Cincinnati, South Carolina and Texas A&M all scored touchdowns on their opening drive of the second half against the Hogs.

Pittman said he could not explain the third-quarter trouble, but he and the staff are making moves to correct it.

"I wish I did," Pittman said when asked if he knew why there was such a drastic third quarter scoring discrepancy. "We're gonna have halftime at practice this week.

"We're just gonna stop, and then we're gonna come back and go good-on-good right when come off of halftime. We're gonna change the way we stretch coming out of the half. We've got to change something. You know what we're trying to do, we're trying to put it in our mind that we've got to get going."

Arkansas had trouble starting games fast last season but has alleviated that issue to an extent by jumping out to early leads in each of its three games versus FBS teams, including a 14-0 start against Texas A&M in the first 10 minutes.

However, the mood changed on the Arkansas sideline after Texas A&M jarred the ball free from quarterback KJ Jefferson on a first-down jump from the 3-yard line as the Razorbacks were trying to go up 21-7 late in the second quarter.

"We couldn't get out of our funk Saturday," Pittman said. "I mean we're still up. I met with the staff, and then while they were meeting trying to adjust, I was in the locker room talking to our kids, because you could feel that we were behind by 30. And we were up. And you could feel it."

Pittman noted the Razorbacks have been in position to put games out of reach in the third quarters and haven't done it.

"They've either been closer to us, or we've been worse behind in the third quarter of every game, and we have opportunities to put people away," he said. "Just haven't been able to do it, so it's on our mind. We're going to change a few things up at practice to see if we can emphasize it a little bit better."

The loss to Texas A&M was the first for the Razorbacks since a 42-35 setback at No. 2 Alabama last season, snapping a five-game winning streak.

Pittman said he talked to the players on the bus ride to the airport.

"I went back and talked to each and every one of them," he said. "The sad thing is we lost. The great thing is we're not used to it. That was only two losses in the last 10 games, but it hurt.

"We had guys that were crying. But every Saturday you put yourself in that situation, and you just try to do the best you can as a coach and as a player. We're going to flush it out of here in the first half of our meeting, then the second half is going to be on to Alabama.

"We have to learn from some things we did that we have to not do. Once we get that handled, we'll move on. We don't have time. We have the University of Alabama coming in here. I'm sure we'll rebound and be excited to play."