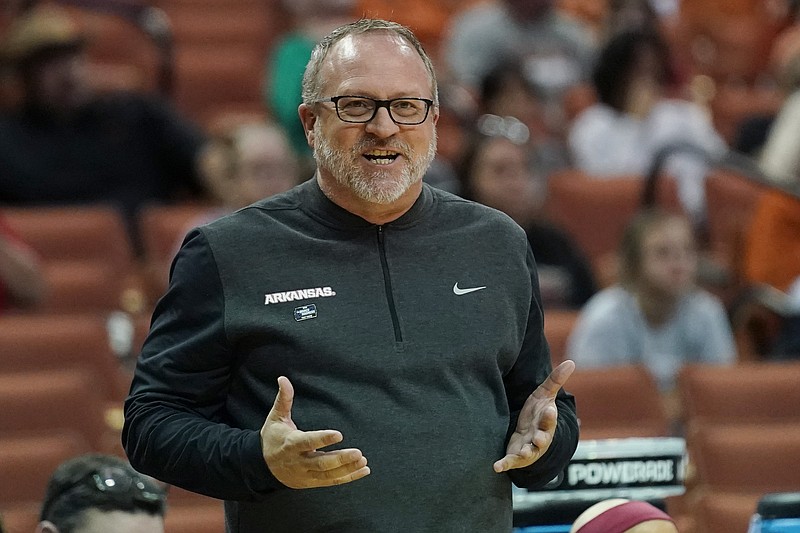 Arkansas head coach Mike Neighbors reacts to a play during the first half of a college basketball game against Utah in the first round of the NCAA women's tournament, Friday, March 18, 2022, in Austin, Texas. (AP Photo/Eric Gay)

FAYETTEVILLE — University of Arkansas women’s basketball coach Mike Neighbors decided to push the start of practice back a couple of weeks this year.

He came away from Monday’s first official practice pleased, but pointed out having Makayla Daniels back is big. But also having transfers Maryam Dauda and Saylor Poffenbarger on campus longer, too, has also been good.

“We got as much done [Monday] as in any first practice that I’ve ever been a part of,” Neighbors said on Zoom on Tuesday afternoon. “I was shocked that we were able to get all the way through it conditioning-wise, mentally-wise. We’ll see how much they retained [Tuesday].

“We got started two weeks later than we’ve ever started before, so for us to have the first practice where I feel like we didn’t miss anything, that’s very satisfying as a coach.”

With only a few newcomers on the roster, that’s made it easier, he added.

“It’s nice … that we’ve got the vast majority of our team that understands every word that comes out of our mouth,” Neighbors said. “Mak [Daniels] is at the point where she’s starting to anticipate them and go to spots before we even say things and do things with the team before we even start to talk about it.

“She’s doing a lot of fixing throughout the summer workouts and on into the first workout.”

The Razorbacks lost leading scorer Amber Ramirez to graduation, while Fayetteville’s Sasha Goforth decided to step away from basketball citing a stomach condition called gastroparesis and anxiety as the reasons. But Neighbors said Goforth attended practice this week.

Neighbors said his team has peaked a little early in the past, so he decided to start practice a little later.

“I let’em have two extra weeks to get their class schedules under their belt, to get used to where they were living, to get used to going to tutoring … we got started two weeks later than we ever have before, so for us to have the first practice where we didn’t miss anything — that’s very satisfying as a coach.”

Redshirt senior Chrissy Carr is a newcomer to Fayetteville, but a college basketball veteran. The 6-1 transfer from Eden Prairie, Minn., played last year at Syracuse and three previous years at Kansas State.

Carr, who averaged 11.7 points and led her team with 60 made three-pointers, said her teammates have helped make the transition easier.

“I think I ask Mak 30 questions a practice,” Carr said.

“I wouldn’t be able to play the way I’m playing if it wasn’t for them being able to trust me with the ball. They are like, ‘Hey, go shoot this. Hey why are you hesitating on your shot?’ As a new player, that’s really helped knowing that your teammates have confidence in you even when you’re new.

“The family atmosphere, I’ve really never seen anything like it. I heard it’s different but experiencing it firsthand has been great.”

Daniels, who surpassed 1,000 career points late last season, was second on the team averaging 14.0 points per game a year ago, not to mention a team-best 5.3 rebounds per game despite being only 5-foot-8. She also averaged a team-high 1.79 steals per game.

The 6-2 Poffenbarger will be able to be multi-dimensional to play some inside and on the perimeter.

Daniels was quick to point out the team’s added size with players like Poffenbarger and 6-4 Dauda, who played her high school basketball at Bentonville, makes a difference.

The Razorbacks host Arkansas-Fort Smith for an exhibition game on Wednesday, Nov. 2, then open the season at Arkansas-Pine Bluff on Nov. 7.