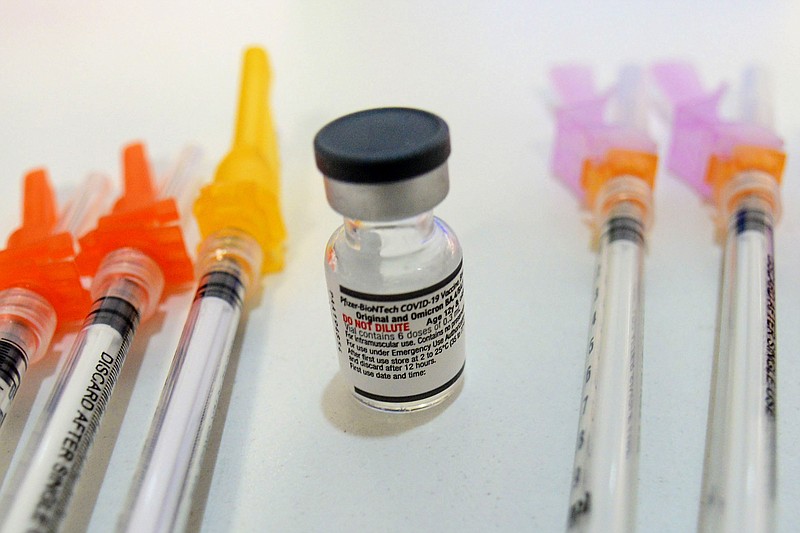 Booster shots of the Pfizer COVID-19 vaccine are displayed during a vaccine clinic in Townshend, Vt., on Tuesday, Sept. 20, 2022. (Kristopher Radder/The Brattleboro Reformer via AP)

Despite a continuing decline in Arkansas' new coronavirus cases over the past few weeks, the number of covid-19 patients in the state's hospitals grew Tuesday for the second day in a row as the state's cumulative count of cases since March 2020 topped 950,000.

The state's death toll from the virus, as tracked by the Department of Health, rose by 26, to 12,106, the largest daily increase in deaths since March.

State Epidemiologist Mike Cima said reported deaths on Tuesdays have been elevated since the Health Department recently stopped entering death information in its data system on Saturdays and Sundays.

Deaths that previously would have been entered on those days are now being entered on Mondays, meaning they will show up in the state's numbers on Tuesdays, he said.

Still, including the deaths reported Tuesday, a total of 89 deaths had been reported over the past week, the highest weekly total since the week ending March 28.

Cima said 23 of the deaths reported Tuesday happened within the past month.

Of the others, he said, one occurred in July and two were from August.

Because of reporting delays, as well the amount of time it can take for someone to succumb to complications from covid-19 after being infected, it's common for the number deaths reported each day to continue rising after new cases start to decline.

During the state's initial surge of infections from the omicron variant this past winter, the largest weekly number for deaths was the 298 that were reported the week ending Feb. 17.

After reaching its lowest level in more than two months on Sunday, the number of covid-19 patients reported to be in the state's hospitals rose by seven on Monday and by six on Tuesday, bringing it to 265.

The number as of Tuesday was still down from a recent high of 296 that it reached a week earlier, however.

Why the number hospitalized hasn't declined as consistently as the state's new case numbers is "a good question," Cima said.

While the state's new case numbers have been falling among all age groups, he said, the rate is highest among people 65 and older, who tend to suffer severe illness from covid-19 more often than younger people.

"That could be a potential reason we're seeing those hospitalizations continue at this level," Cima said.

More than 82% of Arkansans age 65 and older had been fully vaccinated as of about a week ago, but only about 55% had received even a single booster dose -- either of one of the original vaccines or of one of the updated boosters that became available earlier this month, according to U.S. Centers for Disease Control and Prevention data.

"One of the best ways that you can protect yourself from the worst that this virus has to offer is to make sure that you're up to date on your vaccines," Cima said.

He noted, however, that the number hospitalized remains well below the level it reached during the initial omicron surge, when it peaked at more than 1,800 in January.

During the most recent surge, powered by even more transmissible omicron strains, the highest the number hospitalized reached was 442 on July 20.

"We'll keep a close eye on it, but my thought is that we will see decreases in that number here shortly," Cima said.

The state's count of cases rose Tuesday by 545, which was down by 90 from the daily increase the previous Tuesday.

Already at its lowest level since the week ending June 6, the average daily increase in the state's case count over a rolling seven-day period fell to 461.

With recoveries outpacing new cases, the number of cases in the state that were considered active fell by 378, to 5,667.

It was the first time the number had been below 6,000 since June 9.

Pulaski County had the most new cases, 58, on Tuesday, followed by Washington County with 35 and Sebastian and White counties, which each had 29.

After falling the previous three days, the number of the state's virus patients who were in intensive care rose Tuesday by five, to 45.

Declining for the second straight day, the number on ventilators fell by five, to 12.

At its hospitals in Little Rock and Springdale, Arkansas Children's had eight covid-19 patients on Tuesday, down from 10 a week earlier, spokeswoman Hilary DeMillo said.