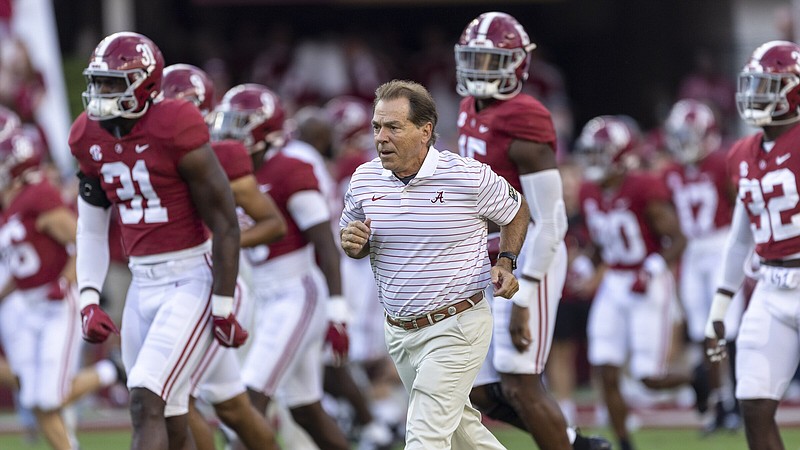 FAYETTEVILLE -- Since 2008, Alabama Coach Nick Saban has an .800 winning percentage against opponents ranked in The Associated Press 25 poll.

Alabama is 72-18 against ranked teams the last 15 seasons, including 4-0 in matchups with Arkansas.

The Razorbacks are the first ranked team Alabama will play this season, but the first of three consecutive opponents in the AP poll along with No. 17 Texas A&M and No. 8 Tennessee.

"It's the best team I've seen in pads in my career in 30 years of coaching, and they played like it tonight," Utah State Coach Blake Anderson said after the Tide opened with a 55-0 victory over the Aggies.

Alabama escaped Austin with a 20-19 victory over Texas, then beat Louisiana-Monroe 63-7 and opened SEC play by pounding Vanderbilt 55-3.

"I think we've shown a pretty good pattern here of making improvements, a little bit of an upward trend," Saban said. "I think we are getting closer to playing the way we'd like to play.

"The challenges get greater as we go, so we have to continue to focus on moving forward and improving. I think the team sort of bought into everybody trying to play to a standard, and I think this is probably the closest we've come to that so far this year. The key to the drill is can we continue to build on it."

Anderson won the Bronko Nagurski Award, presented annually to the nation's top defensive player, and had 34.5 tackles for losses totaling 148 yards, including 17.5 sacks. He was fifth in the Heisman Trophy voting.

Anderson has 7.5 tackles for losses of 37 yards, including 4.5 sacks. He also returned an interception for a touchdown against Louisiana-Monroe.

"I mean, you should be talking about Will every week," Saban said. "He makes a lot of plays. He makes sacks, plays hard, prepares well. He's a great leader on the team. I'd talk about him for as long as you'd want to talk about him.

"The guy played that way last year. He plays that way this year. It's important to him. He has passion for the game. He understands the game.

"He's got power. He's got speed. He's got initial quickness. He turns speed to power in pass rush."

Running back Jahmyr Gibbs, a junior transfer from Georgia Tech, leads Alabama with 17 receptions for 187 yards and 3 touchdowns and has rushed 25 times for 172 yards.

"We haven't given up a lot of explosive plays," Saban said. "We've played pretty well in the red area.

"I think this group plays really well together. The front seven and the back end are tied together for the most part. We've got experienced players at linebacker and in the secondary at safety, and I think that's very helpful.

"The one thing we haven't done is create a lot of turnovers, which is something we keep harping on all the time."

Alabama has three takeaways and has lost four turnovers.

"I'll take this kind of defense without turnovers, but I'd like to see us get more turnovers and win the turnover battle in games," Saban said. "I think it's very significant in winning and losing."

Alabama is averaging 48.3 points and 517.5 yards in total offense to rank No. 6 nationally in both categories. The Tide had 628 yards against Vanderbilt, including 345 passing by Young.

"I feel like we take what the defense gives," Saban said. "A lot of the plays that ended up being passes were called runs."