Razorback teammates supportive of their QB 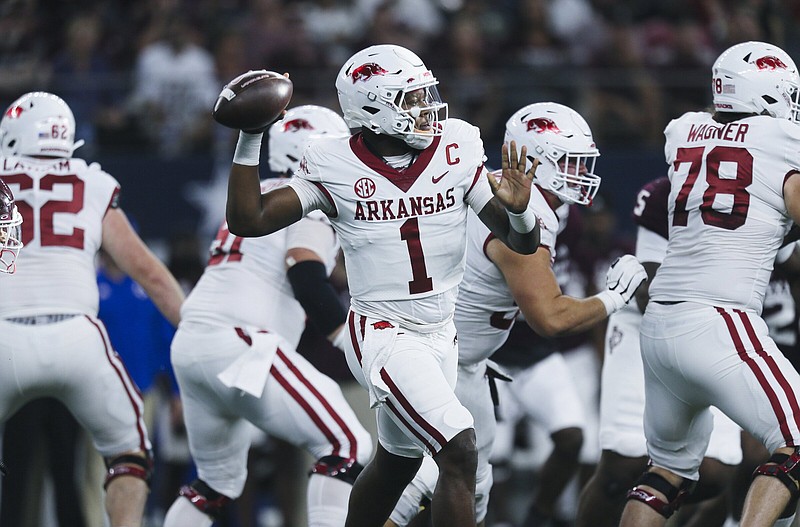 Jefferson lost a fumble on an ill-advised leap from the 3-yard line with Arkansas leading Texas A&M 14-7 late in the second quarter. The Aggies caught the loose ball in the air and eventually returned the fumble 97 yards for a touchdown to grab momentum.

"With that, I feel like he's the type of guy he'll get over things fast, just as in the game where he fumbled and I fumbled," Sanders said, referencing their first-half turnovers in a 38-27 win over Missouri State the week before.

No. 20 University of Arkansas hosts No. 2 Alabama at 2:30 p.m. Saturday, trying to improve ball security after having four turnovers and no takeaways in the last two games.

"I mean, the football is a funny shaped ball and it rolls very weirdly sometimes and stuff happens," the senior Knox said. "You just have to let it go.

"KJ does a really good job of letting things go and playing the next play. I mean, he wasn't too down, he wasn't too high. Just very even-keeled and you could tell by his performance, he knew he had to get it back and he had to put the team on his back and help us try to win the game last week.

Sanders, who lost a fumble at the 1-yard line against Missouri State, said Jefferson lifted him up.

"He actually helped me out with my fumble," Sanders said. "After my fumble. I was down and I didn't expect me to fumble close by the end zone, so he helped me out.

"So I feel like this week right here, he's on one this week, just with practice and taking everything to the next level and making sure just not himself with ball security, but the running backs and everybody else on the offensive side of the ball."

Junior defensive back Myles Slusher rejoined the Arkansas secondary after missing two games at a time when it was ailing with the losses of safety Jalen Catalon and cornerback LaDarrius Bishop.

Slusher had six tackles, including a tackle for a 4-yard loss, a hurry and a pass breakup in the Razorbacks' 23-21 loss to Texas A&M last week.

"Still a lot of stuff to clean up as far as my playing and technique wise, but it felt good being back out there with the team and everything," Slusher said. "I felt like we're coming good together. We're going to have a strong week this week."

Slusher needed a couple of weeks to recover from a huge blow he delivered on Cincinnati tight end Leonard Taylor that left him dazed on the field for a couple of minutes.

The cross training conducted by defensive coordinator and safeties coach Barry Odom paid off during the down time.

"I feel like everybody is prepared in case something happens in the back end, or if somebody needs to move," Slusher said. "We trained for that in spring ball and fall camp."

Receivers Jadon Haselwood and Isaiah Sategna were in green no-contact jerseys for the second consecutive day and neither went through fastball starts.

Raheim Sanders had a couple of runs to open fastball starts for the first unit. On the third snap, KJ Jefferson had time to scan and found Bryce Stephens on a crossing pattern from right to left for a solid gain.

Cade Fortin ran the second unit and completed both of his passes, a short hitch to Harper Cole and a longer outbreaking completion on the right sideline to Jaedon Wilson, Harper Cole and Sam Mbake.

Arkansas has failed to score twice inside the opponents' 3-yard line in the last two games, dropping the Razorbacks red-zone scoring rate to 76.47%, tied for 102nd among the 131 FBS teams.

Arkansas is 13 of 17 in red-zone scoring opportunities, with two of the whiffs occurring in Saturday's 23-21 loss to Texas A&M. KJ Jefferson had the ball knocked out from the Texas A&M 3, with the Aggies recovering and returning it for a game-changing touchdown in the second quarter.

The Razorbacks had a chance to take the lead with 1:30 remaining, but kicker Cam Little missed a 42-yard field goal off the right upright after that series had pushed to the Aggies' 15.

In the prior game, Raheim Sanders lost a fumble at the Missouri State 1 when a defender's helmet popped the ball out.

The other failed red-zone possession, defined as inside the opponents' 20-yard line, came when Jefferson was stopped on a fourth-and-1 quarterback sneak in the third quarter of a 44-30 win over South Carolina.

Georgia, Tennessee, Texas A&M and Vanderbilt of the SEC are among the 14 FBS teams who have scored on 100% of their red-zone opportunities.

Former Nick Saban assistants or analysts are head coaches at 13 of the 130 FBS schools other than Alabama, meaning his coaching tree comprises 10% of the population of FBS head coaches.

Neither team Saturday had a kickoff return, as Arkansas' Jake Bates was 4 for 4 on kickoffs for touchbacks and Texas A&M's Caden Davis was 5 for 5.

Bates improved his touchback percentage to 83.3% (20 of 24), carrying on the good work by Vito Calvaruso last year.

Additionally, the Razorbacks prevented ace return men Devon Achane and Ainias Smith from any return yardage at all. Aggies Coach Jimbo Fisher confirmed Monday that Smith suffered a "lower body injury in the victory and will miss the remainder of the season.

Razorback sophomore Bryce Stephens, who had an 82-yard punt return touchdown in the prior game against Missouri State, had but one return for minus-1 yard against the Aggies. His muffed fair catch was recovered by Quincey McAdoo in the first quarter.