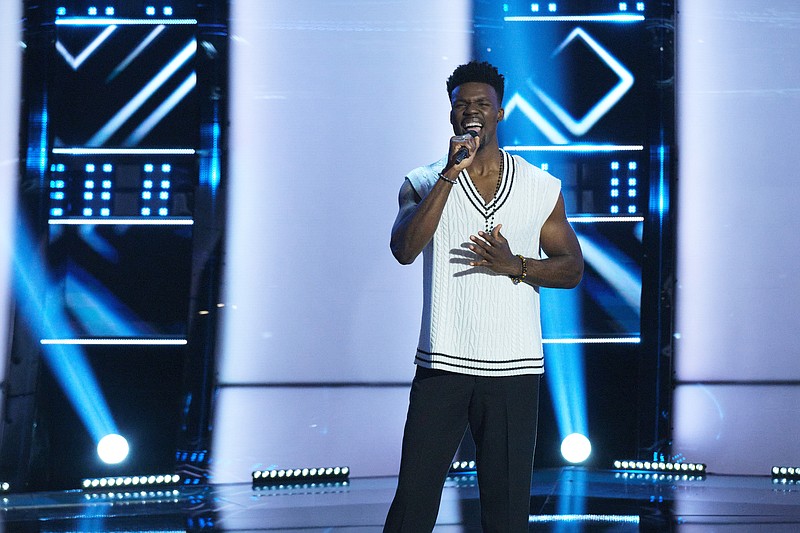 A student the University of Arkansas for Medical Sciences drew national attention Monday night when he took the stage for the blind auditions on "The Voice" on NBC.

He sang his own version of the Billie Eilish hit "When the Party's Over," mixing multiple musical styles into the pop song.

Judges Gwen Stefani and Camila Cabello turned their chairs before the 22-year-old singer finished the first line of the song, with Blake Shelton turning moments later. Igbokidi can be seen looking away as the trio turns to face him while he sang.

"I think that was me trying not to freak myself out," Igbokidi said Tuesday in a telephone interview. "If I looked Camila Cabello, Gwen Stefani and Blake Shelton directly in the eye while I was singing that song, I may not have been able to sing that song. So I think that was probably that reaction, like just a visceral reaction of, 'Do not mess up.'"

The fourth judge, John Legend, made the decision to turn moments before Igbokidi sang the last line of the verse.

"I honestly was just hoping for one chair, if any at all, just to get an audition," he said. "And so when I got to the point where I was doing the audition, and coaches were turning within, you know, the first few seconds of my song, it kind of hit me in the middle of singing, like, 'Oh, like I'm on the show now.' And that's definitely something to be thinking about, while you're also trying to, like stick to the notes and the melody. But it was just very surreal and amazing."

Mark Langley, the choir director at Lakeside High School, said Igbokidi did not join the choir until his senior year, but he immediately made his mark.

"He jumped right in," Langley said. "He was never afraid to sing out; he became a part of the group very quickly. So he was always motivated, and he was always driven to try for things."

Langley said Igbokidi tried out and was accepted to a regional choir that spans seven states, so he was not surprised to see his former student on "The Voice."

"Hearing his voice, now as an adult, and how much it's matured, and then watching some of even his TikTok videos, I think he's got the goods," he said. "I mean, he's got the voice. He's got the range, he's got the personality, and I think that it will just be how much he wants. ... He may or may not win 'The Voice,' but just you don't have to win 'The Voice' to also make it. So I think it's going to be how determined he wants to be with that."

"I watched him over the Cowboys there starting out," he said.

The coach recalled an instance where the basketball team was preparing for a road trip to Texarkana when Igbokidi told him he could not make the trip due to a choir concert. He said he called his former post player to congratulate him on his accomplishments, and the two talked about it.

"When I talked to him the other day, I was like, 'Well, dude, I understand why you missed that ballgame to go to the choir concert. That's pretty impressive,'" Lamb said with a laugh. "We both laughed about it. ... Of course, Igbokidi is such a well-rounded kid. You know, he's good at choir; he's good at basketball.

"And, you know, we didn't take it out on him because he missed the game. Because when you have two choices like that, we just let the kids decide that. But like a basketball coach, I needed my post man there, but now understand why he missed it."

Igbokidi said Lamb halfheartedly picked at him a little about missing the game at the time.

"I had like a Chambers concert or something like that, and I had the Texarkana game, and I chose to go sing, which just tells you, I mean, I really do love doing what I do. ... There was no question. I didn't hesitate to be like, 'Yeah, I'm gonna go sing. Sorry, coach.'"