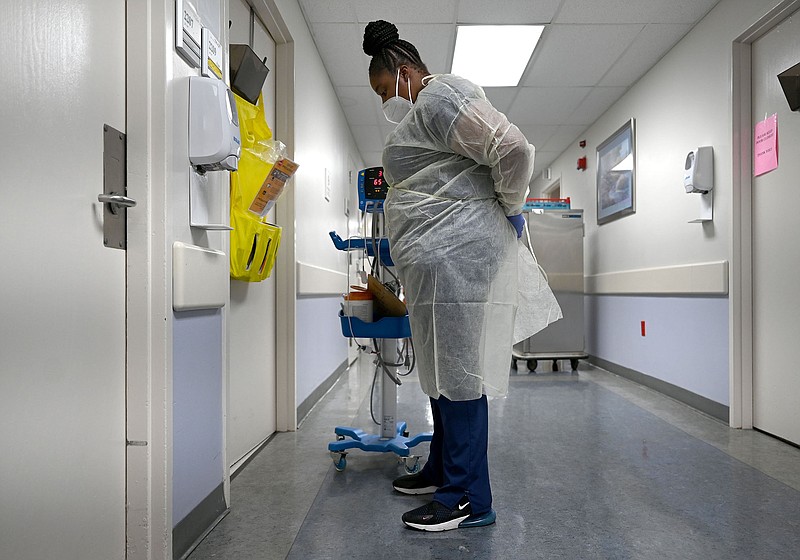 Sharaina Smiley, a Patient Care Technician at Jefferson Regional Medical Center in Pine Bluff, puts on PPE before entering a patient's room in the covid ward of the hospital on Friday, Feb. 18, 2022. (Arkansas Democrat-Gazette/Stephen Swofford)

The number of Arkansans hospitalized with covid-19 fell Thursday to its lowest level in three months. However, the state's death toll from the virus, as tracked by the Arkansas Department of Health, rose by 17, to 12,148.

The number of covid-19 patients in the state's hospitals fell Thursday by 19, to 231. It was the smallest number since June 28, and the second consecutive day of double-digit drops.

The state's count of coronavirus cases rose by 343. That was smaller by 156 than the increase on Wednesday, and less than half the size of the number of new cases reported the previous Thursday.

It was the smallest daily increase in cases on a Thursday since May 12.

Declining for the 16th straight day, the average daily increase in the state's covid case count over a rolling seven-day period fell to 363. It was the first time the rolling seven-day daily average had been below 400 since the week ending June 3.

The number of cases in the state that were considered active fell by 303, to 5,137, as recoveries outpaced new cases. The count of active cases was already at its lowest level since June 7.

After rising the previous two days, the number of the state's virus patients who were in intensive care remained Thursday at 47.

Growing for the second day in a row, the number of those patients on ventilators rose by four, to 17.

Since the pandemic reached Arkansas in March 2020, the state Health Department has reported 951,283 cases of coronavirus. Of those, 933,750 are considered recovered.