Bank of England steps into markets 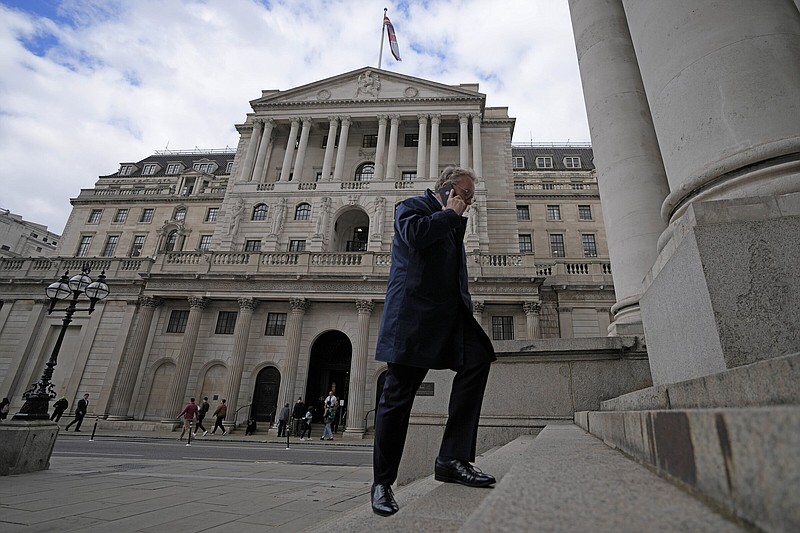 A man walks up the stairs of the Bank of England in London on Wednesday. The bank started a temporary bond-buying program Wednesday as it takes emergency action to prevent “material risk” to the nation’s financial stability. (AP/Frank Augstein)

LONDON -- The Bank of England took emergency action Wednesday to stabilize U.K. financial markets and head off a crisis in the broader economy after the government spooked investors with a program of unfunded tax cuts, sending the pound tumbling and the cost of government debt soaring.

The central bank has warned that crumbling confidence in the economy posed a "material risk to U.K. financial stability," while the International Monetary Fund took a rare step earlier this week to urge the U.K., a member of the Group of Seven advanced economies, to abandon its plan to cut taxes and increase borrowing to cover the cost.

In taking action, the Bank of England said Wednesday that it would buy long-term government bonds "on whatever scale is necessary" over the next two weeks to combat a recent sell-off in British financial assets. The bank's actions are focused on long-term government debt, where yields have soared in recent days, pushing up government borrowing costs.

"Were dysfunction in this market to continue or worsen, there would be a material risk to U.K. financial stability,″ the Bank of England said in a statement. "This would lead to an unwarranted tightening of financing conditions and a reduction of the flow of credit to the real economy.″

"The purpose of these [government bond] purchases will be to restore orderly market conditions," the central bank added in its statement, which had an immediate effect on markets. Bond auctions will take place until Oct. 14.

The program to bolster economic growth by cutting taxes, especially for high earners, while spending heavily to protect households from rising energy costs has been resoundingly rejected by global investors and economists, in part because of the large amount of borrowing it will require at a time of rising interest rates and high inflation.

A resulting sell-off in British assets since Friday has particularly affected bonds with long maturities, according to the Bank of England.

Yields on 10-year government bonds have risen 325% this year, making it much more expensive for the government to borrow to finance its policies. Yields, which measure the return buyers receive on their investment, had risen to 4.504% on Tuesday from 3.495% the day before the tax cuts were announced.

The speed at which bond yields rose had disrupted Britain's mortgage market, with some lenders pulling offers on new mortgages because they had become too difficult to price.

The British pound, meanwhile, plunged briefly Monday to a record low against the U.S. dollar. The pound traded at $1.0628 by Wednesday in London, after rallying from the record low of $1.0373.

The British currency is still down 4% since this past Friday, and it has fallen 20% against the dollar in the past year.

"A decision by the government to scrap some of the tax cuts, or to cut spending sharply, would help to alleviate the stress in" currency and bond markets, Samuel Tombs, an economist at Pantheon Macroeconomics, wrote in a research note.

"But its actions to date have eroded confidence among global investors, which cannot be easily restored. Accordingly, a painful recession driven by surging borrowing costs lies ahead," Tombs wrote.

POLITICS AND A KEY MANDATE

Opposition parties have demanded that Parliament be recalled from a two-week break to confront the economic crisis. But Truss and Treasury Chief Kwasi Kwarteng have stayed silent and out of sight, gambling that the economic storm will pass.

Northern Ireland Secretary Chris Heaton-Harris, one of the few government ministers on view Wednesday, said the government's policies would "make my country richer and more prosperous."

"I think you will find economic policy takes more than a couple of days," Heaton-Harris said.

The Bank of England had refrained Monday from an emergency interest rate increase to offset the pound's slide but said it would be willing to raise rates if necessary. But the bank's next scheduled meeting is not until November, and the lack of immediate action did little to bolster the currency.

The central bank was able to step in immediately with government bond purchases because its Financial Policy Committee is required to ensure the stability of the financial system.

The British government said it has fully underwritten the central bank's intervention on government bonds.

The government has resisted pressure to reverse course but says it will set out a more detailed fiscal plan and independent analysis from the Office for Budget Responsibility on Nov. 23.

The economic turmoil is already having real-world effects, with British mortgage lenders pulling hundreds of offers from the market as brokers waited to see what the bank would do on rates.

Susannah Streeter, senior investment and markets analyst at Hargreaves Lansdown, said the Bank of England's emergency move "smacks of a bit of panic and also of frustration that the government appears to be digging in its heels, reluctant to perform a political U-turn."

Information for this article was contributed by Danica Kirka and Jill Lawless of The Associated Press, and Eshe Nelson of The New York Times.