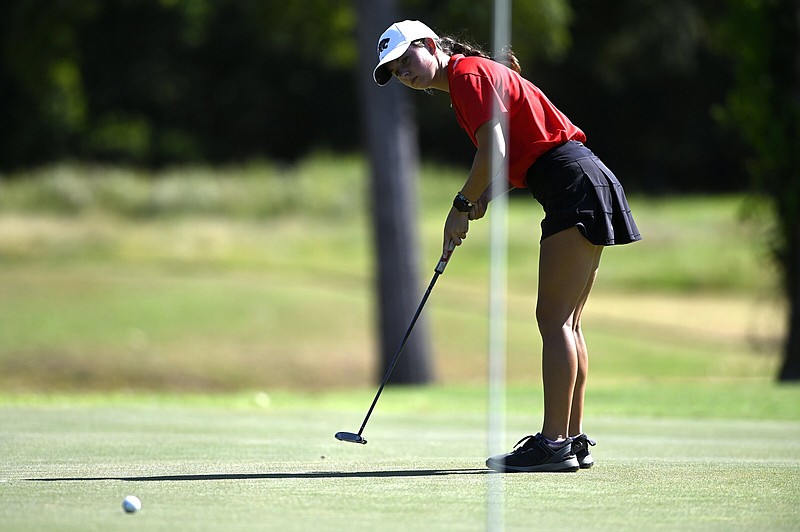 Cabot senior Emmerson Doyle follows the path of a putt Wednesday during the final round of the Class 6A girls state golf tournament at the Burns Park Championship Course in North Little Rock. Doyle shot an 11-over 153 to win the tournament by one stroke over Bentonville’s Lauren Pleiman. More photos at arkansasonline.com/929golf/. (Arkansas Democrat-Gazette/Stephen Swofford)

Doyle struggled early during the final of the two rounds. She began in a three-way tie for the lead but bogeyed the first four holes. However, she played consistently through a disaster-free final 14 holes to finish with an 11-over-par, two-day total of 153 with rounds of 76 and 77. Bentonville's Lauren Pleiman finished one stroke back at 154.

"After those first holes, she really settled in and played a good round of golf," Cabot Coach Matt Malham said.

Doyle faced competitive challenges throughout both rounds that led to a tie with Pleiman with two holes left to play.

As Doyle approached the par-4, 318-yard No. 17 tee box, Malham said he asked her if she wanted to know the score.

"She told me she had already looked at it," Malham said. "Some like to know the score and some don't, even the pros. She wants to know where she stands, and it doesn't affect her."

"For some reason, I like to know," Doyle said. "When I'm in a pressure situation, I feel I handle it pretty well. I kind of like to know rather than not so that I won't say, 'Oh. I wish I had known that.' "

Doyle led by two strokes before she bogeyed and Pleiman birdied the par-3 16th. Tied on the 17th fairway, Pleiman hit her approach 10 feet right and uphill from the pin. Doyle was 15 feet away but below the particularly fast green.

Doyle's first putt stopped 2 feet short, Pleiman's missed by inches to the left of the hole and rolled 7 feet away. Her second putt also missed.

"That hill was so steep," Pleiman said. "It just kept rolling."

For the convenience of the players, required to walk both rounds, the 9th and 18th holes were swapped Wednesday, so the leaders' foursome completed their round on the 511-yard, par-5 9th hole.

Pleiman attempted to reach the green with her second shot and was within 20 yards in the rough left of her target. Doyle's third shot came from 80 yards away and stopped 20 feet short of the pin. Pleiman's pitch rolled 20 feet past.

"I'd rather lay up to a good yardage I know that I can hit to," Doyle said. "So, that's what I played for."

"I knew I most likely had to birdie 18 in order to be anywhere near her," Pleiman said.

Both parred, and Doyle's victory was complete.

"The last few holes, knowing it was nip and tuck, she played solid through that," Malham said. "She did what she had to do to make pars with no big numbers. She really settled in and played a good round of golf."

Har-Ber senior Lauren Milligan was disappointed by her final-round 79, but Doyle and Pleiman said her humor helped take the edge off of the pressure-packed final few holes.

"Lauren [Milligan], the other Lauren, is funny," Pleiman said.

Milligan laughed when told of her playing partners' assessments.

Milligan has played for state championship teams throughout her high school career. She won with Bentonville as a freshman in 2019 and with Har-Ber for the last three seasons.