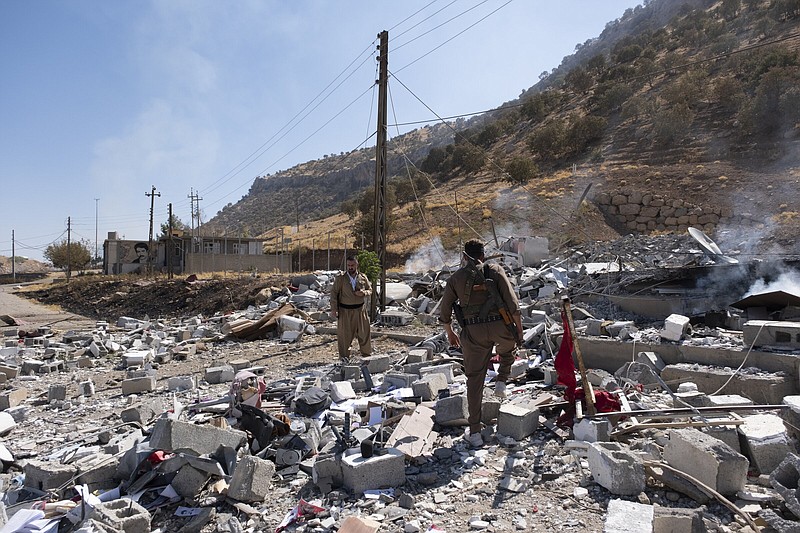 Members of exiled Komala Party inspect the aftermath of Wednesday’s bombing in the village of Zrgoiz, near Sulaimaniyah, Iraq, where the bases of several Iranian opposition groups are located. An Iranian drone bombing campaign targeting the bases of an Iranian-Kurdish opposition group in northern Iraq has killed and wounded dozens. (AP/Metrography/Ala Hoshyar)

An Iranian drone bombing campaign targeting the bases of an Iranian-Kurdish opposition group in northern Iraq on Wednesday killed at least nine people and wounded 32 others, the Kurdish Regional Government's Health Ministry said.

The strikes took place as demonstrations continued to engulf the Islamic Republic after the death of Mahsa Amini, a 22-year-old Iranian Kurdish woman who was detained by the Iranian morality police.

Iran's attacks targeted Koya, some 35 miles east of Irbil, said Soran Nuri, a member of the Democratic Party of Iranian Kurdistan. The group, known by the acronym KDPI, is a leftist armed opposition force banned in Iran.

In a statement, the United Nations High Commissioner for Refugees said the attacks "impacted the Iranian refugee settlements" in Koya and that refugees and other civilians were among the casualties.

Iraq's Foreign Ministry and the Kurdistan Regional Government have condemned the strikes.

Iran's state-run IRNA news agency and broadcaster said the country's Revolutionary Guard targeted bases of a separatist group in the north of Iraq with "precision missiles" and "suicide drones."

Gen. Hasan Hasanzadeh of the Revolutionary Guard said 185 Basijis, a volunteer force, were injured by "machete and knife" in the unrest, state-run IRNA news agency reported Wednesday. Hasanzadeh also said rioters broke one of the Basij members' skull. He added that five Basijis are hospitalized in intensive care.

The Iranian drone strikes targeted a military camp, homes, offices and other areas around Koya, Nuri said. Nuri described the attack as ongoing.

Iraq's Foreign Ministry spokesman said the government in Baghdad was expected to summon the Iranian ambassador to deliver a diplomatic complaint over the strikes.

In Baghdad, four Katyusha rockets landed in the capital's heavily fortified Green Zone on Wednesday as legislators gathered in parliament.

The zone, home to the U.S. Embassy in Iraq, is a frequent target of rocket and drone attacks that the United States blames on Iran-backed Iraqi militia groups.

Following the first series of strikes in northern Iraq, Iran then shelled seven positions in Koya's stronghold in Qala, a KDPI official told the AP on the condition of anonymity in order to speak publicly. The Qala area includes the party's politburo.

An AP journalist saw ambulances racing through Koya after the strikes. Smoke rose from the site of one apparent strike as security forces closed off the area.

The attacks appear to be a response to the ongoing protests roiling Iran over the death of a 22-year-old Iranian Kurdish woman who was detained by the nation's morality police.

The U.S. Department of State called the Iranian attacks an "unjustified violation of Iraqi sovereignty and territorial integrity."

"We are also aware of reports of civilian casualties and deplore any loss of life caused by today's attacks," said spokesperson Ned Price in a statement. "Moreover, we further condemn comments from the government of Iran threatening additional attacks against Iraq."

The United Nations Assistance Mission for Iraq said in a tweet that the country cannot be treated as "the region's 'backyard' where neighbors routinely, and with impunity, violate its sovereignty."

"Rocket diplomacy is a reckless act with devastating consequences," the U.N. agency said.