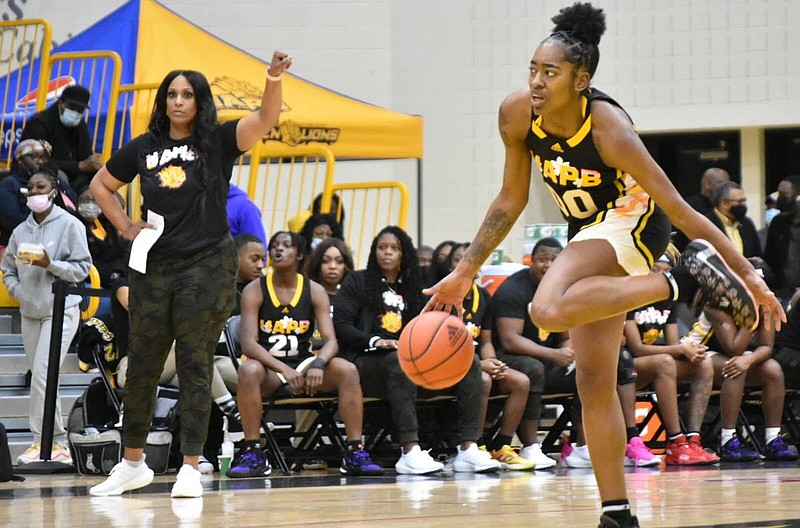 University of Arkansas at Pine Bluff basketball Coach Dawn Thornton started preparations for last season having some players sick with covid-19 and ailing from injuries.

This year is vastly different.

For the first time since Thornton began coaching at UAPB in 2019, she had all of her players on campus during the summer for training and practicing.

"We have had a chance to implement some things early," Thornton said Wednesday during the Southwestern Athletic Conference women's basketball Zoom conference. "We've laid the foundation, the culture and the expectations of the program. Everybody bought in over the summer. We had our strengthening coach all summer. We are on target to be right where we need to be."

The Lady Lions have 12 new faces and returning key players Zaay Green, a 6-foot-2 redshirt senior guard, and Maya Peat, a 6-6 center who Thornton said has "done a phenomenal job" and "dominating in practice."

Thornton is leaning on Green, who has two years left in eligibility, to help lead the players.

"Zaay is special," Thornton said."When we first got her, Zaay completely changed the way my staff and I coached. This kid is one who was up at 5 o'clock in the gym and at 10 and 11 o'clock at night. We are like having to take her shoes and lock her out. Her work ethic is what has separated her from everyone on the team."

"It seems building this thing every year has become the trend, but it's really, really exciting," Thornton said.

Davenport was a high school star in Alabama and played at Rutgers before transferring to Georgia. In high school, she helped Team USA to a FIBA Under-18 gold medal in 2018. Davenport, who can play multiple positions, has been called a "legit threat" with her game on one website.

Thornton said Jelissa Reese, a 5-9 transfer guard from Troy University, is a player to watch.

"She's been really, really special for those who know basketball about Troy," Thornton said. "They are cut from a different cloth. She's been setting the standard every single day."

Reese helped Troy win their fourth Sun Belt Conference championship during the 2020-21 season. She averaged 1.6 points, 1.5 rebounds, 0.4 assists and 0.3 steals per game while shooting 80 percent from the free throw line.

Reese missed the first 19 games during the 2021-22 season because of injury and only played in six games. Now she's ready to get back in action for the Lady Lions.

Thornton said this signing class will be one of the most dynamic groups UAPB fans have ever seen.

"I felt that I owed it to this program to recruit not only a group of talented young women, but to bring in student athletes with high character, self-motivators, academically sound, and overall great people," Thornton said.

UAPB's 2022-23 Lady Lions tip off at home Nov. 7 against the University of Arkansas Razorbacks.

"We are anticipating that to sell out. That will be a great opportunity to start our season off," Thornton said. "We wanted to start off early and we would say get kinda punched in the mouth, but we wanted to make we sure that we can see the fruit of our labor early from how hard we've been working early in the preseason."

"We wanted to showcase our talent throughout the state of Arkansas," Thornton said.

The Lady Lions will play in the Miami Thanksgiving Classic Nov. 27-29, taking on Columbia, Miami and Southern Methodist University.

"The girls feel like they have some unfinished business in Coral Gables," Thornton said.

The Lady Lions travel to the West Coast in December to play in the Raising The B.A.R. Invitational before hitting the court against San Francisco on Dec. 7.

"I definitely think we match up very well with a lot of teams in the conference that we have struggled with," Thornton said. "Adding depth has been something that has been a spotlight for us this season."