OPINION | FILM SCENE: Chasing down ‘Ghosts of the Ozarks’ 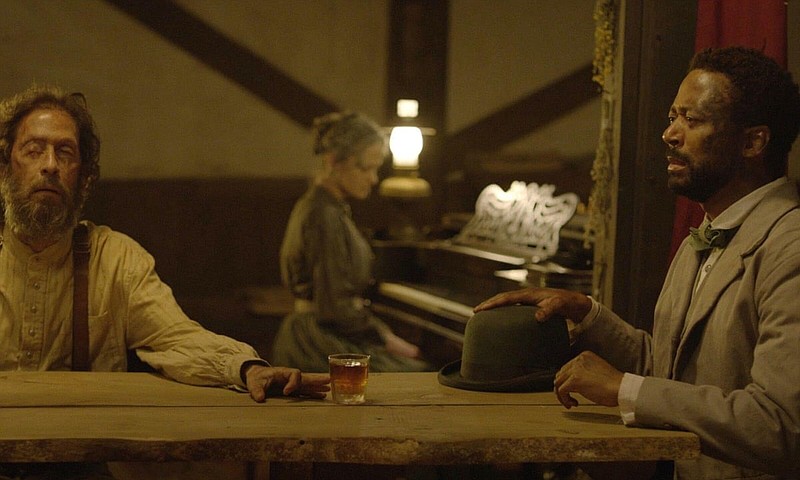 Arkansas has its fair share of legends and tall tales. It's a state with rich folklore from the ghastly Gurdon Light that floats aimlessly above the railroad tracks in Clark County to the haunted Woodson Lateral Road in Pulaski County with its phantom hitchhiker that's destined to wander alone forever. Last week in a sold-out theater in Jonesboro, a group of Arkansans gathered to witness a new spooky tale as the Arkansas Cinema Society (ACS) presented a special screening of "Ghosts of the Ozarks," a feature-length narrative shot almost entirely in the Natural State by homegrown filmmaker Jordan Wayne Long.

"Ghosts" is a M. Night Shyamalan-ian southern ghost story that takes place in the years following the Civil War and the emancipation of slaves. Doc (Thomas Hobson), a young Black doctor, is summoned to the Arkansas town of North Fork, which is nestled up in the mountainous terrain of the Ozarks. It's a strange and mysterious town, advertised as a utopia. But this paradise is imprisoned behind giant wooden fortifying walls that are meant to keep its citizens inside and to keep something evil out. Early in the film, we see a red fog seamlessly circling around the town's surrounding forest. And in this crimson mist, the titular ghosts patrol, hunting any people who dare wander away from the city.

The town seems to have all sorts of modern conveniences like gas-powered utilities. Its economy isn't based on money, and everyone there has a job. They all serve a purpose in the community. But the good doctor soon comes to realize what happens when people outlive their usefulness in the town and that there may be worse things inside the city walls as opposed to the ghosts on the outside. We follow the doctor as he meets a barrage of odd townspeople; the stern yet secretive mayor (Phil Morris, "Seinfeld's" Jackie Chiles) who keeps everyone in their proper place, the blind German bartender Torb (Grammy winner Tim Blake Nelson) who has precision hearing and is too handy with his custom-made butchers knives, the oddball fashion entrepreneur and photographer, Douglas (David Arquette, who is also a producer on the film). Doc even gets smitten with the local huntress, Annie, who lives beyond the town's protective walls. Annie is played by Tara Perry who is also the co-writer of the film.

The acting in "Ghosts of the Ozarks" is overall very good, partly due to the high-profile actors in the film. Nelson steals the show as he chews just the right amount of scenery to bring a layer of depth to his character with every tormented gesture. Plus he gets a hauntingly beautiful musical number about halfway into the film. Arquette on the other hand struggles portraying an old timey southerner. His performance comes off as caricaturish. But the one actor that caught me by surprise was Joseph Ruud who, in real life, is a professional wrestler.

In the film, he plays a silent gentle giant and brother to the romantic interest Annie. His facial expressions are able to elicit a surprising variety of emotion. And when he finally breaks his silence, it's with a great deal of heart. And it's always nice to see local talent get significant screen time as locals Ed Lowry, Graham Gordy and Corbin Pitts all have supporting roles in the film.

The movie does the South justice with its cinematography and its production design. The opening image is a sprawling drone shot that hovers over the brown and gold autumn stained trees of the Ozarks. The movie was shot by Matt Glass, who also co-directed the film with Long. Glass wore a few different hats for this production as he created the beautifully haunting score and worked on the film's visual effects.

In fact, most of the crew had multiple roles to fill. Co-director Long, was also the co-writer and also handled the production design, which is phenomenal. He single-handedly built the old Civil War era town, which is a feat that is genuinely astounding, considering how good and historically accurate every building looks. In fact, all the props and wardrobe are pretty spot on for that time period, down to every little detail, like the white mining gowns that the town's workers wear. A lot of research and care obviously went into every frame of the film.

The only complaint I have with the movie comes from the script level. The protagonist, the good doctor, is a very passive character. His only goal throughout the film is to make the best of his circumstances. Early on he is introduced to some of the town's mysteries, but he never goes out to investigate or solve them. For example, early on in the film he sees the red fog and the ghosts within, and he just kind of accepts it, along with the rest of the town. This leads to many scenes where things are happening, but at the same time not moving the plot forward. It's like he's a Kafka-esque character who's wandering in and out of the town's politics and folklore.

After ACS' screening of the film, Long and his co-writer Perry showed up to answer audience questions. Long spoke with an honest conviction as he explained his journey into the world of cinema.

Long was born in the sticks of Bald Knob and somehow made his way out west to Hollywood, through a very unconventional path. After working all sorts of odd jobs, from being in a rock band to being a zoo keeper, he graduated from Graceland University with a degree in communications. And through years of hard work and perseverance, along with dozens of YouTube videos and short films, Long has become an Emmy-winning documentarian and has directed two feature films. His message for the audience was one of sincerity as he proclaimed that anyone from anywhere with any background can go buy a camera and become a filmmaker. All it takes is belief in yourself and in your community, and a little southern ingenuity.

Print Headline: Chasing down ‘Ghosts of the Ozarks’