‘Dead for a Dollar’ 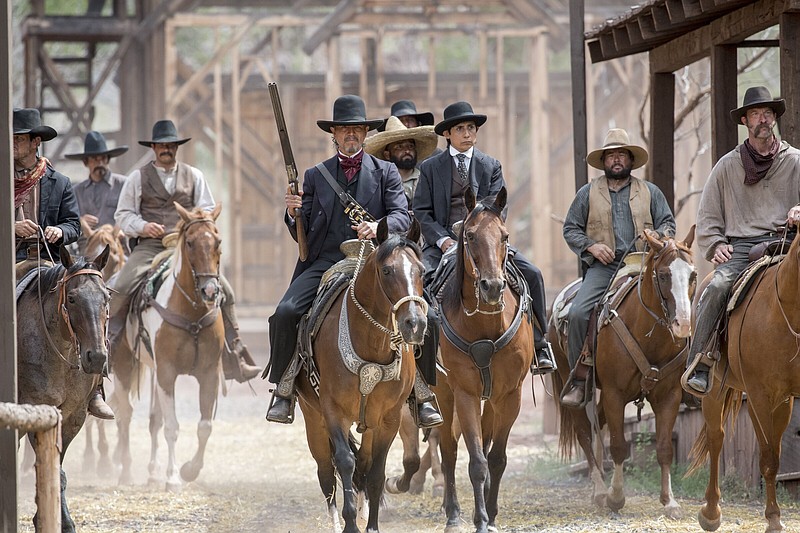 Walter Hill making a new Western excited me. A cast that includes Christoph Waltz, Willem Dafoe, Rachel Brosnahan and Benjamin Bratt was icing on the cake. That's a lot of talent for "Dead for a Dollar," a modestly budgeted embrace of a once thriving movie genre. As with the 80-year-old Hill's past hits and misfires alike, "Dead for a Dollar" is effortlessly watchable. Its straightforwardness and casual pace might be a hurdle for some. But there's something about its easy-going style and intoxicating milieu.

One of the film's most noticeable distinctions is how it often looks, sounds, and plays like an old Western serial. The sharp digital look, the framing of specific shots, the scene-to-scene transitions, even some of the dialogue seem like callbacks to classic television. It's a cool style choice that actually fits well with Hill's leisurely storytelling. For example, a big chunk of the movie has characters simply hanging out, waiting for the story's inevitable climax, similar to filler episodes in a TV series.

But unlike filler episodes, which are known for their lack of story progression and character development, Hill gives us plenty to soak up in these stretches of supposed downtime. It's where his potpourri of players and the world where they exist begin to take form. It's where grievances can be started or settled over a good card game. It's also where everyone (and I mean everyone) packs a six-shooter, and they love talking about them just as much as using them.

There's nothing special about the story itself (conceived by Hill and Matt Harris). And you'll need more than 10 fingers to count all the tropes you'll come across. But this is no copy-and-paste effort. Hill is too savvy of a filmmaker for that. And while the story is soaked in nostalgia, Hill isn't beholden to it. Instead "Dead for a Dollar" is a movie you absorb as you watch a filmmaker honor yet subtly subvert a genre he clearly loves. Equally fun is recognizing Hill's many influences, whether it's the simple nuts-and-bolts ethos of Budd Boetticher (to whom the movie is dedicated) or the violent jolts of Sam Peckinpah. Yet Hill still adds plenty of his own flavor, especially in the extended action-fueled finale that has his fingerprints all over it.

Set in 1897, renowned bounty hunter Max Borlund (Waltz) is called on by a prominent businessman named Martin Kidd (Hamish Linklater). According to Kidd, a buffalo soldier named Elijah Jones (Brandon Scott) abducted his wife, Rachel (Brosnahan), and crossed the border into Mexico. He says Jones has demanded $10,000, which he refuses to pay. So he wants Max to go to Mexico and bring his wife back. The job may not fully pass the smell test, but it seems pretty cut-and-dried, so Max accepts.

Since Elijah is also wanted for desertion, the Army sends the chatty sharpshooter Alonzo Poe (Warren Burke) to accompany Max. The two cross the border, eventually catching up to Elijah and Rachel, and then escort them to a one-horse Mexican town where Max sends word to Martin that he has found his wife and apprehended her abductor. As they wait for Martin to arrive, another side of Rachel and Elijah's story emerges. Soon Max, a bounty hunter of principle with an affection for honesty, begins to question everything he has been told.

Also in town is Joe Cribbens (Dafoe), a shady type from Texas who was just released from an Albuquerque prison. He has come south to lay low a bit and play cards. But it just so happens that Borlund was the man who put him in prison, and Joe is the kind who holds a grudge. Add to the mix Tiberio Vargas (Bratt), a ruthless outlaw who (along with his gang of faceless final-act fodder) runs the territory and takes a special interest in the gringos new to town.

It all makes for a combustible formula that (in true Western fashion) moves from a simmer to a boil. While we wait for the inevitable showdown (a beautifully staged extended flourish of gunfire and retribution) Hill and his cast have a good time unpacking this eclectic batch of characters. Waltz's well-measured restraint is a solid foil for Dafoe's gravelly scene-munching. Both are pitch-perfect. Brosnahan is a fearless straight-shooter and a strangely fascinating antithesis to the usual Western femme. And the steely Bratt gets some fun mileage out of a fairly cookie-cutter heavy.

With "Dead for a Dollar," Hill treats us to a buffet of gorgeous imagery, sweeping us away with his stunning widescreen vistas and sucking us in with his artfully blocked interiors. Nearly every scene radiates an alluring sepia-tinted glow reminiscent of an vintage photograph but cleaner and with startling clarity. Admittedly, Hill pushes his aesthetic choices too hard in spots. But there's never a shortage of pretty things to see.

"Dead for a Dollar" may not satisfy those hungry for a fresh spin on the classic Western. But there's beauty in the way it tips its Stetson to its influences. And it's not like Hill doesn't have a few ideas of his own. Take the well-meaning revisionism that doesn't play out as well as it could, yet adds a spirited contemporary twist. And then you have Hill himself. Just the richness of his style and his sheer filmmaking know-how makes this worth watching. Add in all its other strengths and you have a movie sure to be dismissed by some but cherished by others. Count me in latter camp.

Print Headline: ‘Dead for a Dollar’