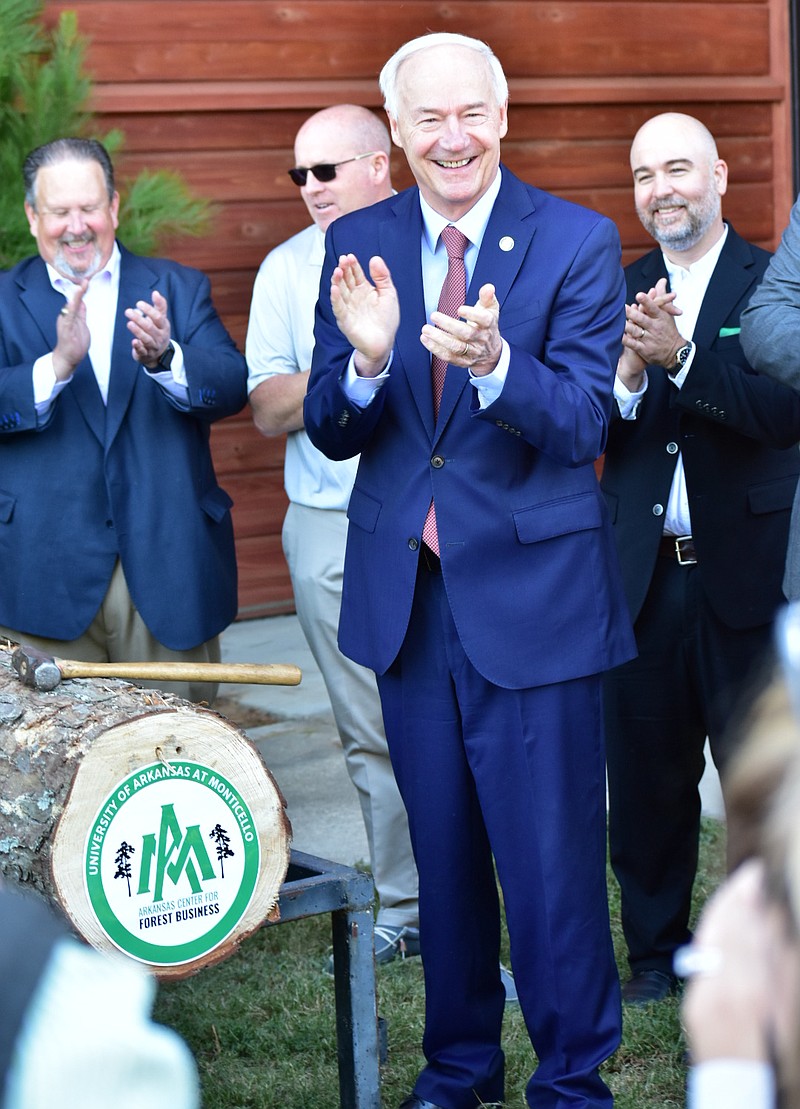 Arkansas Gov. Asa Hutchinson and others applaud the ceremonial log breaking to signify the establishment of the Arkansas Center for Forest Business at the University of Arkansas at Monticello on Thursday. (Pine Bluff Commercial/I.C. Murrell)

MONTICELLO -- What was promoted as a ribbon cutting for the new Arkansas Center for Forest Business was actually a log breaking outside the University of Arkansas at Monticello's Chamberlin Forest Resource complex.

Gov. Asa Hutchinson broke off an end of a round log that revealed a large sticker for the new center during a dedication ceremony Thursday morning. The center is part of UAM's College of Forestry, Agriculture and Natural Resources -- the only forestry school in the state -- and was created by the state legislature last year, with $841,000 in state funding going toward the center July 1.

"The governor and the state legislature have provided us funding, so we will be hiring additional people -- technical experts in forest business to promote the growth of the forest industry in the state of Arkansas, and do it in a sustainable manner," said Matthew Pelkki, UAM's forestry chair. "The beauty of it is, we have so many forestry scientists here, we can tap into all that expertise here. This is a great location to have that business center."

Forestry is growing as an industry in Arkansas, according to Hutchinson and UAM officials. The governor said forests cover 56% of Arkansas' territory, and the industry accounts for $6 billion directly to its economy, which is largely dependent on timber. Forests in the state are also growing twice as fast as harvested, he added.

"That, to me, is an astounding fact but also a reassuring fact for those that value our forests as I do," Hutchinson said. "[There are] 18.4 million acres of forests that scrub our air, shelter our wildlife and enhance our lakes and streams, and that truly makes us the Natural State. But this Center for Forest Business will do more than simply allow us to preserve our forests and enjoy them forever. It will create jobs. It will increase incomes and it will strengthen communities in southeast Arkansas. That has to be an objective of all of ours. At the same time, [it's] managing the forests in a way that keeps them vibrant, keeps them healthy and part of our future."

Efforts to promote forestry in Arkansas, Hutchinson said, have included recruiting mills and forestry product companies to come to the state.

"Forestry's contribution to the economy is a contribution to the quality of life in Arkansas to have healthy forests," said Michael Blazier, dean of the College of Agriculture, Forestry and Natural Resources. "When you look at the contribution of forestry to the Arkansas economy as a proportion of its gross domestic product, Arkansas' third in the country in terms of the total amount of contribution forestry provides to the economy and the Southeast U.S. The Southeast U.S. is one of the primary producers of timber products in the world. It produces 20% of the world's sawtimber, pulpwood and forest products, and it's Arkansas that's part of the breadbasket of that breadbasket, because we're not seeing the larger losses of forestland to urban development that we see in other parts of the Southeast like the Carolinas and Georgia, so the Natural State is staying kind of the Natural State."

The forestry complex at UAM was remodeled in 2012 and added computer labs and classrooms to meet a growing student population, Pelkki said. The building also houses a U.S. Forest Service Research Center, as well as forestry and agriculture students.

Graduate placement in jobs is about 100% within six months of their commencement, and recruitment of new forestry students to UAM is going "very well," Pelkki added.

Hutchinson touted the importance of research and development done at UAM and in collaboration with the main University of Arkansas campus in Fayetteville.

"The center here of UAM involves all of those, the recruitment part that we rely upon you to bring businesses here, the expansion of timber and construction and the development area combined with our work at Fayetteville. UAM is a leader in all three," Hutchinson said. "It's exciting to see the young people it will impact over the next decades, as well as the way it will strengthen Arkansas, our economy and our communities in south Arkansas." 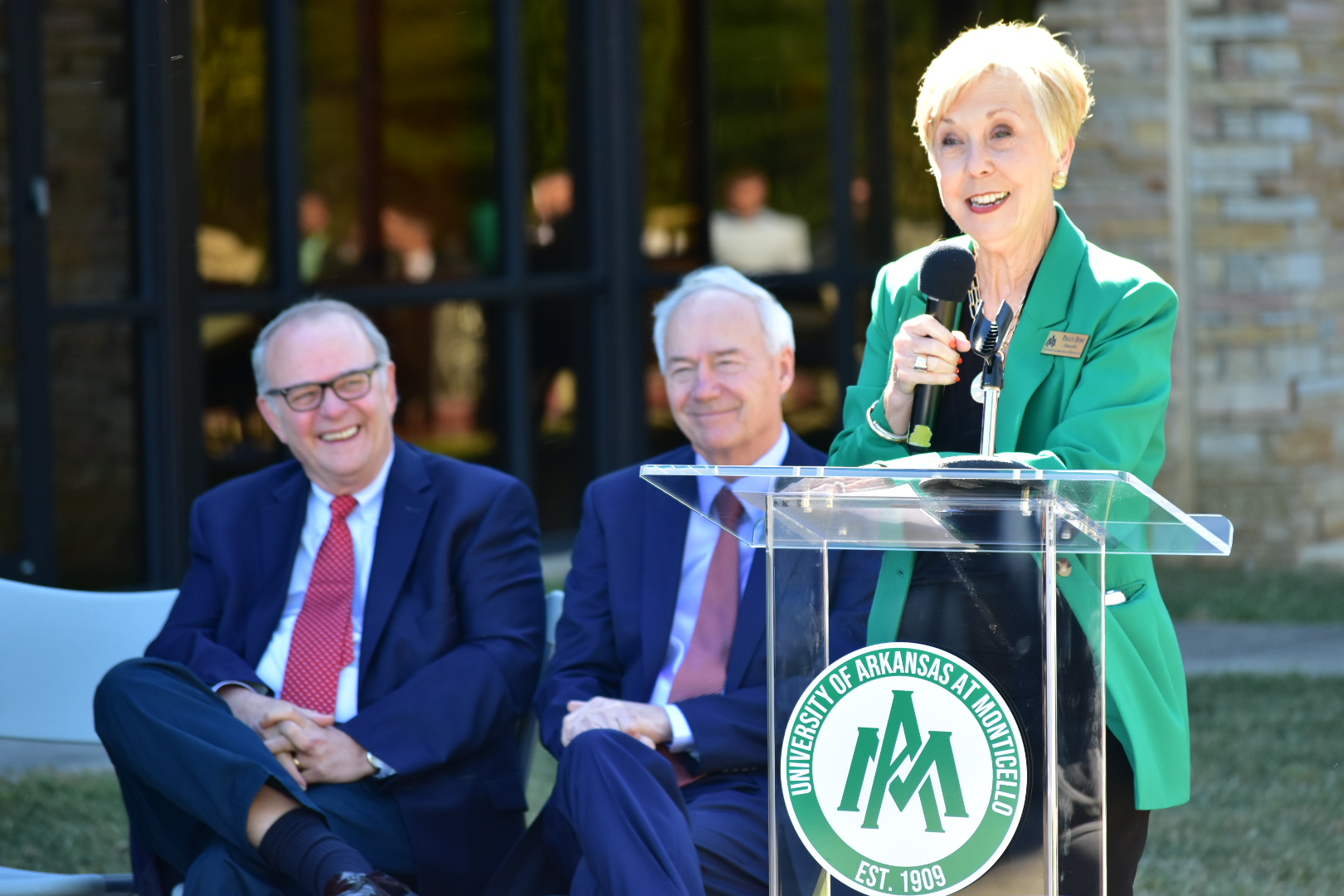 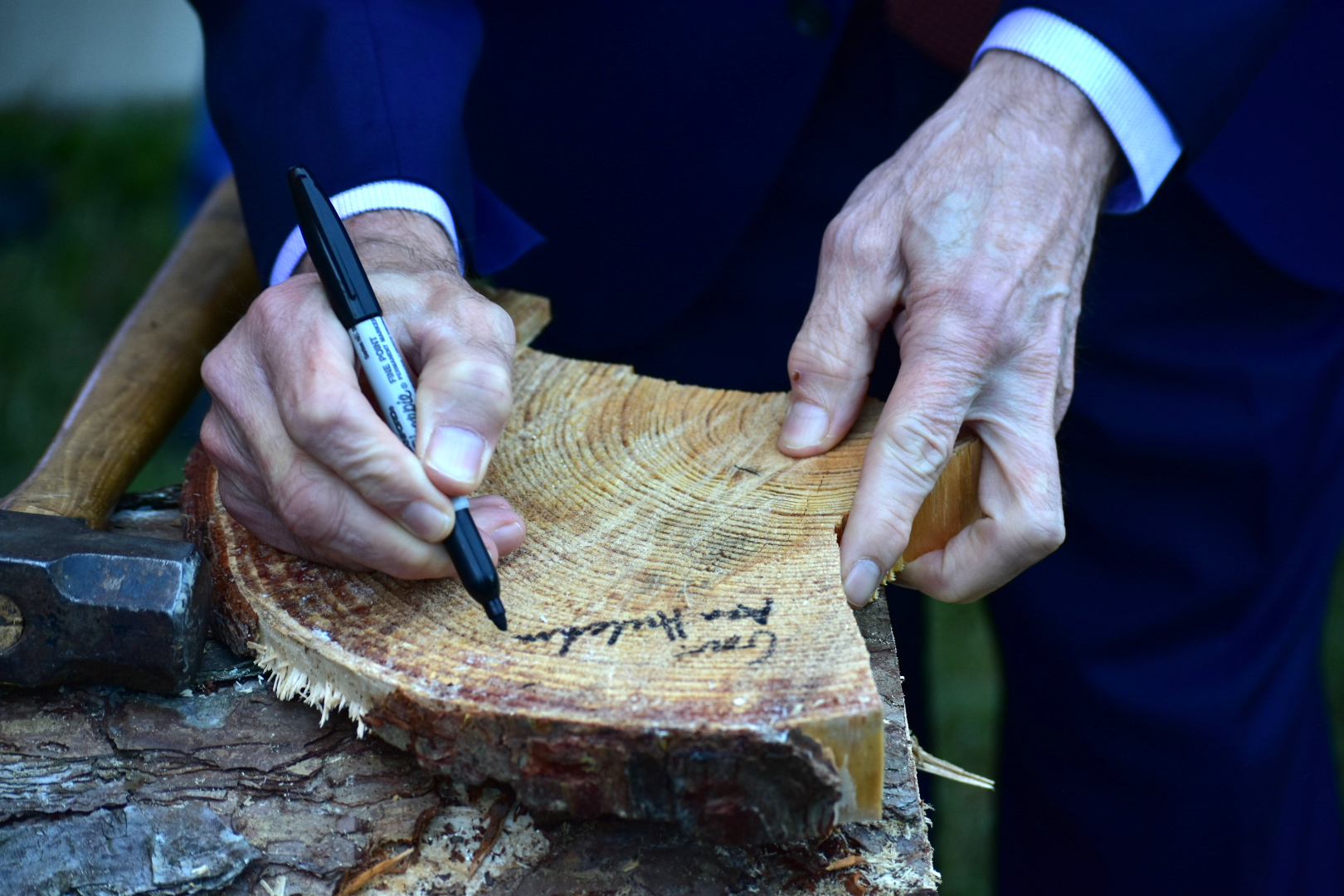 Gov. Asa Hutchinson signs a piece of a log he broke off during a ceremonial log breaking to open the Arkansas Center for Forest Business at the UAM campus. (Pine Bluff Commercial/I.C. Murrell) 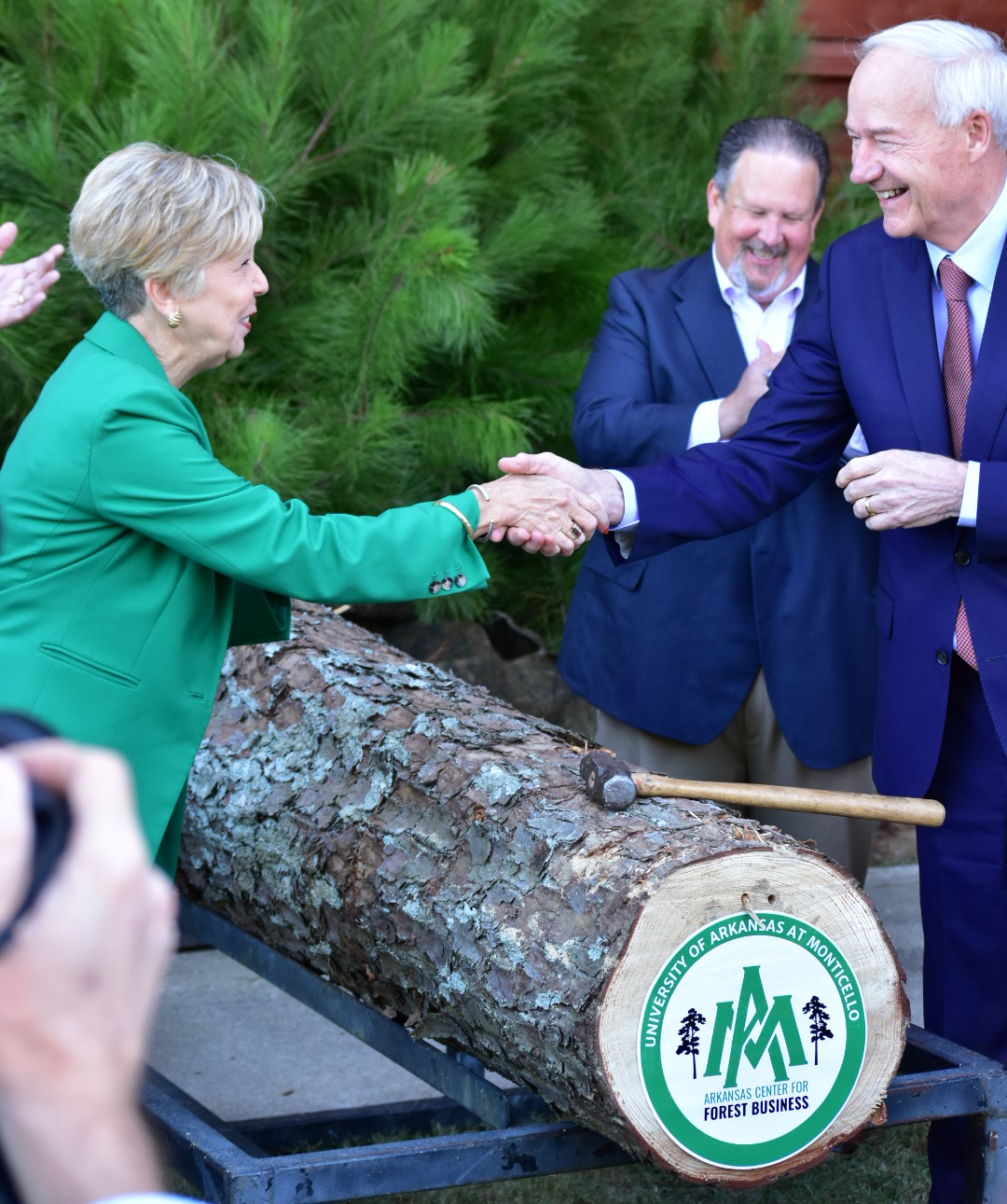