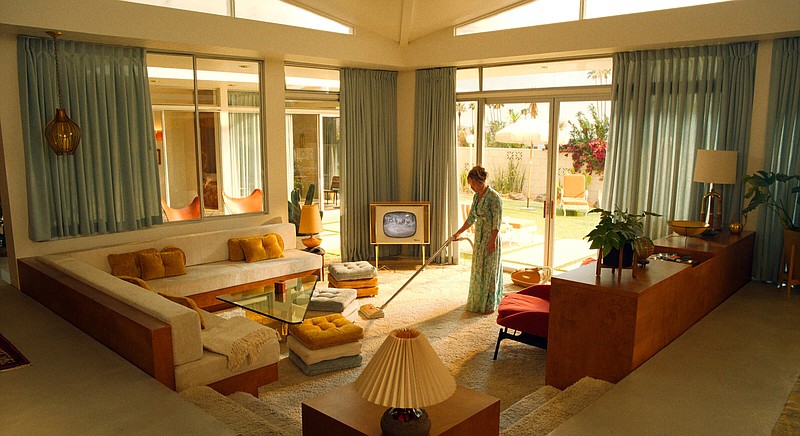 Such are the dreams of the everyday housewife: Alice (Florence Pugh) cleans up in “Don’t Worry Darling.”

Warner Bros.’ “Don’t Worry Darling” had nothing to worry about last weekend at the domestic box office, debuting in first place with $19.2 million, according to estimates from measurement firm Comscore.

The period drama performed about as well as anticipated as rumors and reports of conflict behind the scenes continue to generate buzz for the film. Rounding out the top three at the domestic box office were Columbia Pictures’ “The Woman King,” which added $11.1 million in its second weekend for a North American cumulative of $36.3 million, and a re-release of 20th Century Studios’ “Avatar,” which scored $10 million during its first weekend back in theaters.

Following a high-profile premiere at the Venice Film Festival earlier this month, “Don’t Worry Darling” has received a dismal 38% rating on review aggregation site Rotten Tomatoes and a lackluster B-minus grade from audiences polled by CinemaScore.

“‘Don’t Worry Darling,’ for all its sinister undercurrents and feints at subversion, turns out to be a disappointingly heavy thud of a movie,” film critic Justin Chang writes for the Los Angeles Times.

“It’s a handsomely assembled, increasingly transparent thriller that stomps when it should creep and drags when it should accelerate. Mainly it reminds you of the many earlier, better pictures it consciously resembles; I’m loath to name too many of them and risk spoiling the story’s meager surprises.” For anyone who hasn’t been paying attention: The movie’s promotional campaign has been constantly marred — and/or boosted? — by splashy headlines teasing an on-set romance between Wilde and Styles, a custody battle between Wilde and her ex (Jason Sudeikis), a debunked spitting incident involving Styles and Pine, a public disagreement between Wilde and ex-cast member Shia LaBeouf and a behind-the-scenes feud between Wilde and Pugh.

That last item was recently disputed by 40 members of the “Don’t Worry Darling” production crew, who vehemently denied a Vulture report claiming that Wilde and Pugh got into a “screaming match” on set.

“We’ve avoided addressing the absurd gossip surrounding the movie we’re so proud of, but feel the need to correct the anonymous ‘sources’ quoted in a recent article,” the crew members said Saturday in a joint statement obtained by the Los Angeles Times.

“Any allegations about unprofessional behavior on the set of ‘Don’t Worry Darling’ are completely false. Olivia is an incredible leader and director who was present with and involved in every aspect of production. She ran this set with class and respect for everyone involved. There was never a screaming match between our director and anyone, let alone a member of our cast.” Pugh — who has limited her “Don’t Worry Darling” press duties while shooting the sequel to “Dune” — made an effusive statement Friday about working on the film. She also posted several behind-the-scenes photos, including a snapshot of her and Wilde enjoying each other’s company on set.

Overall, it was a quiet weekend at the domestic box office as theaters continue to struggle to recover from the coronavirus pandemic, in part because of a limited supply of new movies from studios. Ticket sales totaled about $60 million, compared with $123 million for the same weekend in 2019.

The current period is a slow one for the industry as theater chains await potentially big films later this year, including “Black Panther: Wakanda Forever” on Nov. 11. In the meantime, smaller-budget pictures have been competing with classic movie re-releases and foreign films as cinema owners try to fill seats.