Truss’ defense of tax cuts fails to win over markets 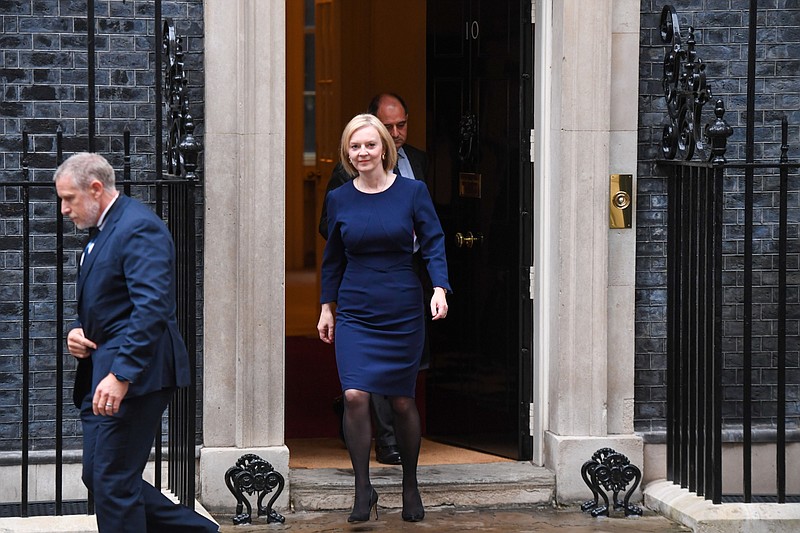 Liz Truss defended her U.K. government's $48 billion set of unfunded tax cuts Thursday after it sent the pound and government bonds tumbling, after days of silence from the prime minister even as the market rout deepened.

The British currency and the price of government debt fell after the comments, her first since the tax cuts were unveiled six days ago. The Bank of England was forced to step in and buy government bonds "on whatever scale is necessary" as a week of market upheaval left many pension funds facing margin calls.

"We're facing very, very difficult economic times; we're facing that on a global level," Truss said Thursday in a round of interviews to local BBC radio stations. "We had to take urgent action to get our economy growing and that means taking controversial and difficult decisions."

Less than a month after taking office, Truss's administration has been battered by a crisis of confidence in policies that have triggered a collapse in the pound and a surge in borrowing costs, pushing the U.K. toward recession and threatening to crash the housing market.

But Truss said that it's not the time to reverse course and that higher taxes are even more likely to lead the U.K. into recession.

"I'm very clear the government has done the right thing," she added. "This is the right plan."

U.K. government bonds extended a slide as Truss spoke, before paring losses. The pound traded as much as 1.2% lower Thursday, before also rebounding. It settled Thursday at $1.11 in London, down 0.9% on the year.

The interviews Thursday marked the first time Truss has publicly addressed the market turmoil, which was sparked Friday when Chancellor of the Exchequer Kwasi Kwarteng announced the largest package of unfunded tax cuts in half a century.

Since then, the Bank of England was forced to stage a dramatic intervention to stave off a crash in the government bond market, and in a rare move, the International Monetary Fund urged her to reconsider the plans.

Senior U.K. executives have also publicly criticized the fiscal plans, with Simon Wolfson, the boss of retail giant Next and a Conservative peer, appearing to blame the government Thursday for a crash in the pound and a worsening outlook for U.K. inflation.

Former Bank of England Governor Mark Carney accused Truss's government Thursday of "undercutting" the nation's economic institutions, after the first weeks of her administration saw the firing of the Treasury's top civil servant, criticism of the central bank over inflation and the apparent sidelining of the government's fiscal watchdog, the Office for Budget Responsibility.

Faced with such a barrage of criticism, Truss was under intense pressure to try to reassure markets -- and voters -- during Thursday's broadcast round. But unlike her predecessor, Boris Johnson, she is not a natural communicator.

Each time Truss was asked about the negative impact of her economic package, she deflected attention from her tax cuts by pointing to the government's energy bills cap to help ordinary Britons this winter.

When asked about soaring mortgage costs, she said the central bank is responsible for interest rate decisions. She repeatedly pointed to Russia's invasion of Ukraine as the cause of the market turbulence.

Having ruled out a policy U-turn, the question is what comes next.

In media interviews, Chief Secretary to the Treasury Chris Philp said there would be no delay to the fiscal package and that ministers would also stick to the timetable of unveiling the medium-term fiscal plan on Nov. 23.

But he also declined to confirm that Truss's government would maintain a commitment by the previous administration to raise pensions and benefits in line with inflation.

At a time when Conservative members of Parliament are increasingly voicing unease at the direction of the new government, reneging on such a politically-charged commitment -- which was announced earlier this year by then Chancellor of the Exchequer Rishi Sunak -- risks a major row in the ruling Tory party ahead of its annual conference in Birmingham next week.

Failure to follow through on Sunak's announcement would draw even more attention to the tax cut Truss's government is implementing for Britain's highest earners, and to her scrapping of a cap on bankers' bonuses.

In reality, Truss has little room to maneuver. Backtracking so early in her administration risks fatally damaging her government's credibility. On the flip side, staying the course risks prolonging the turbulence in financial markets as well as the resulting political fallout.