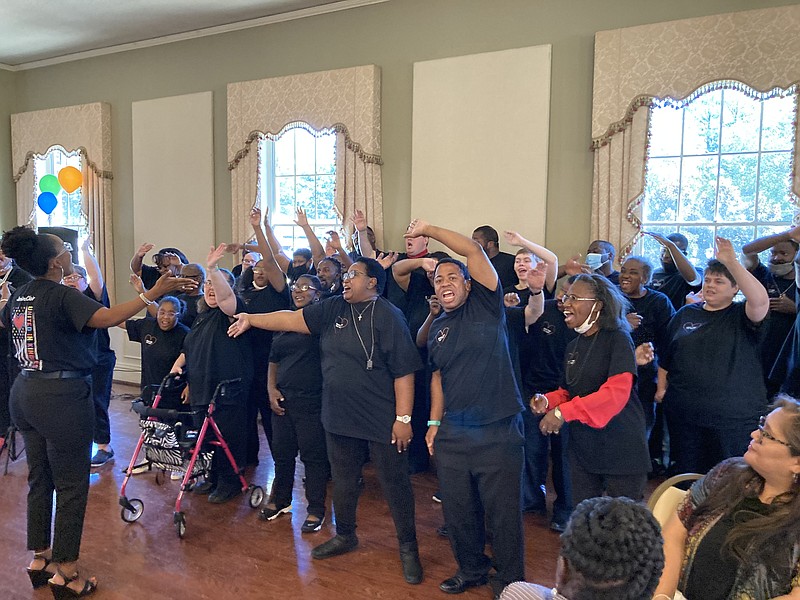 The choir from Jenkins Memorial Center provided the entertainment on Thursday during the kickoff for the United Way of Southeast Arkansas' annual giving campaign. (Pine Bluff Commercial/Byron Tate)

An enthusiastic crowd cheered the announcement of the start of the United Way's 2022-2023 annual giving campaign on Thursday.

Samuel Glover, board president for the agency, introduced the person whose shoulders will carry the burden of reaching the $1 million goal, LaTasha Randle.

"I am honored and privileged to be chosen," Randle said. "But all hands and hearts should be committed to this campaign."

Randle told the hundred or so in the audience who had made their way to the Pine Bluff Country Club for the event that the United Way-supported agencies fill a variety of needs in the community.

Randle said she and those on her "campaign cabinet" who will help her will be able to reach and even top the goal.

"I plan to rock this with the help of you guys," she said.

Also rocking the house on this day was the choir from the Jenkins Memorial Center, a long-time Pine Bluff agency that helps people with developmental disabilities and is a key United Way agency. The choir members sang and waved their hands as they punctuated the words they were singing, and when they were done, they got a standing ovation.

The kickoff was held in conjunction with a joint meeting of the city's two Rotary organizations -- the Downtown and West Pine Bluff clubs.

The upbeat event was also notable for a bittersweet moment when Leslie Dorn, the United Way's executive director for the past seven years, announced that this would be her last campaign and she would be retiring next September.

"This was a temporary job that's lasted 22 years," she said, adding that she was hired to help then-Executive Director Jim Caldwell get the Donald W. Reynolds Community Services Center building built.

Caldwell died in late 2014, and soon after, Dorn was named to succeed him.

Dorn challenged campaign leaders to go beyond the $1 million goal. She said the campaign that kicked off in September 2001 immediately hit the headwinds created by the Sept. 11 terrorist attacks. Despite that, it was a record-breaking year.

Dorn said after the meeting ended that she will be 65 next September and that she looks forward to continuing to work part time.

"I want to do something where I'm doing good things," she said, adding with a smile, "and not have the pressure of raising a million dollars every year."