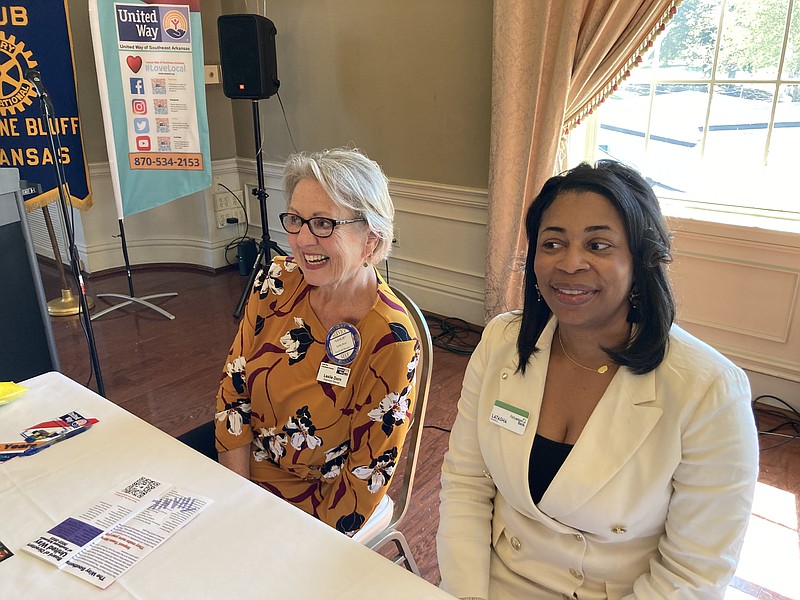 For the first time in 34 years, the United Way of Southeast Arkansas failed to meet its goal of raising a million dollars during its annual fundraising campaign, causing the agency to cut funding to its 18 partner agencies.

Following the Thursday kickoff of the 2022-2023 campaign, Jason Duren, the agency's coordinator of services, said the organization had waited as long as it possibly could to meet the 2021-2022 goal but that, with Thursday being the start of a new season of giving, the clock had finally struck 12.

"I think covid caught up with us," said Duren.

The handwriting was perhaps on the wall last year when, in April, the United Way announced it had reached its $1 million goal -- but by only $54.

The total brought in this year, Duren said, was $835,000, leaving the agency close to 20% short of the seven-figure mark.

Covid, he said, and the incumbent safeguards that were implemented to limit the spread of the virus continued to erode the agency's ability to meet directly with employees at area businesses in hopes of turning those individuals into contributors. Instead, meetings were held online and through social media and emails.

"When we couldn't get in front of people in person and had to do it digitally, the connection was lost," he said. "It was hard when you couldn't look people in the eye and explain why we needed their help."

Additionally, because of the pandemic, businesses closed or had to limit their operations, and in many cases that meant laying off workers, further reducing the pool of individuals who might have donated to the agency.

"We exist largely on people's payroll deductions," Duren said. "When people lose their jobs, there's no paycheck to deduct from."

In a ripple effect, corporations and businesses in Pine Bluff also trimmed their giving to some extent, Duren said.

"Because of the layoffs, big companies that have historically given large amounts of money cut back," he said. "That affects our goals in a big ways."

Duren said it takes contributors of all sizes to reach the goal, and he thanked the top companies – Evergreen Packaging, Central Moloney, Jefferson Regional, Simmons Bank and Relyance Bank – not only for their contributions but for allowing United Way staff and volunteers to reach out to their employees.

"We could not do this without their help," he said.

It does not help matters that Pine Bluff has been losing population precipitously across the years. In the late 1980s, when the United Way started reaching $1 million in annual donations, the city had a population of around 57,000. Now, the number is close to 40,000. The drop in the number of people living in the city was noted in the 2020 census that said the Pine Bluff metropolitan area was losing population faster than any other such area in the country.

Duren said the partner agencies will see an across-the-board 20% reduction in their expected support from United Way, although that reduction will be blunted somewhat because of the additional money the agencies had been initially allotted for 2023. That decision was made at the board level, he said.

Duren said the cuts come at a particularly bad time for agencies, which, because of inflation, are doing more with less already.

Asked where the pain might be the most severe, Duren said "everyone is going to suffer and on levels that we don't even know."

Despite the off year, the United Way's goal for the 2022-2023 giving campaign will remain at $1 million.