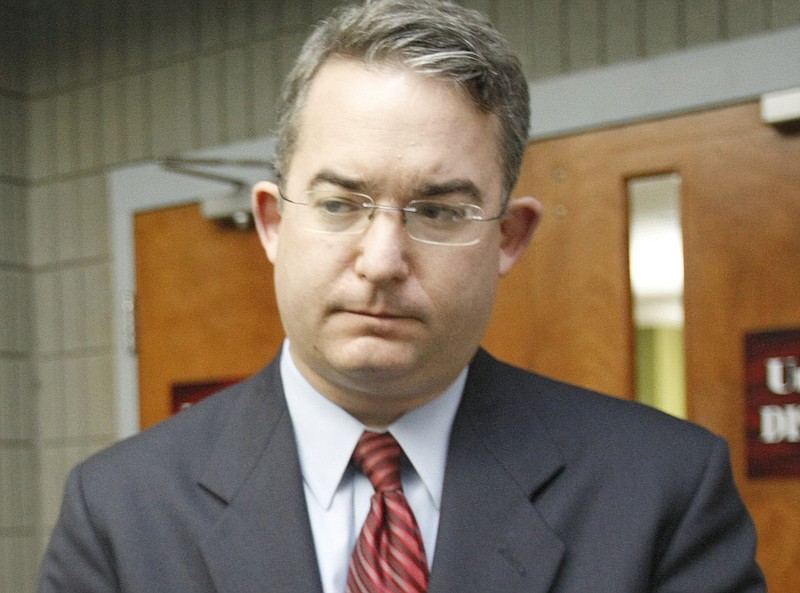 An El Dorado circuit judge on his third term has agreed to accept a two-month unpaid suspension rather than go through the public censure process by challenging misconduct accusations against him, judicial regulators announced Thursday.

David Sachar, executive director of the state Judicial Discipline and Disability Commission, revealed the sanctions he seeks against Robin Carroll, 51, in an 18-page news release. The Arkansas Supreme Court will have to approve the disciplinary action.

Carroll's acquiescence to the allegations -- violations of 10 canons of the Code of Judicial Conduct -- render them to be considered proven, according to his sanctioning letter.

"The totality of your conduct ... exhibited a disregard for legal procedures, failure to uphold the integrity of the judiciary, and behavior that undermined public confidence in the office of circuit court judge," the letter states. "You agree that you committed acts in violation of the Code of Judicial Conduct and that your actions were unethical. You are prohibited from refuting those truths, criticizing this agreed settlement, or otherwise denigrating or disparaging the [discipline commission's] investigation, the witnesses or complainants, or the outcome of these cases."

The sanctions call for three months without pay with one month held in abeyance for a year on the condition that if Carroll commits further violations, the judicial discipline commission will seek to have that third month without pay imposed.

Licensed since 1996, Carroll was elected in 2012 without opposition after serving as the circuit's elected prosecutor for two terms before running for the Union County-based judgeship. He won re-election in 2014 and 2020 also without facing a challenger. The position pays $180,129 a year, about $15,000 per month.

He was recognized as one of Arkansas Business magazine's 40 under 40 in 2001 when he was 30 years old in private practice while serving as legal counsel for the state Democratic Party, writing a newspaper column and preparing to take over as president of the El Dorado Rotary Club. In 1997, he was named one of the 10 Outstanding Young Arkansans by the Arkansas Junior Chamber of Commerce.

The commission's investigation found three instances in which Carroll improperly dismissed cases, demonstrated bias and failed to recuse himself, tried to improperly influence state Game and Fish Commission cases in other courts or showed a lack of diligence in record-keeping and docket management.

The first instance was in August 2021 involving Carroll's conflict with an unnamed sheriff's deputy in an undisclosed county, the sanction letter states. Carroll had earlier told the sheriff that the deputy should be fired and that he had known the deputy since Carroll was a prosecutor. Carroll also contacted the local public defender and said he would dismiss any criminal case involving that deputy if the lawyer asked for it.

Carroll further ignored prosecution objections after the judge prompted the defense in court to ask the cases be dismissed.

"Because these cases are based on the testimony and work of [deputy], who has zero credibility with myself or the prosecutor's office, these -- all these cases -- will be dismissed," the judge said in open court. "[And] any other private counsel who has cases that are based on the testimony of [the deputy], if he's the sole witness, those cases will also be dismissed."

Judicial regulators found that Carroll demonstrated impropriety and "had stepped into the role of defense counsel ... and inappropriately claimed to speak on behalf of one of the parties. [He] did not ensure the proper administration of justice and failed to instill public confidence in the independence, integrity, and impartiality of the judiciary."

The Game and Fish accusations involve a wildlife officer ticketing someone for hunting turkeys with bait in April 2021. The citation was assigned to a district court judge but Carroll contacted that judge and discussed the agency's case in detail, prompting the lower court judge to recuse.

In January, Carroll called and texted Col. Brad Young, the agency's enforcement chief, referencing two other cases, stating that "needs to go away before trial" because the case would embarrass the agency. He also endorsed the unnamed defendant.

Carroll further contacted other Game and Fish officials, the defendant, the defendant's lawyer as well as the special prosecutor to question the legality of a related search. The defense used those legal arguments at trial and the defendant was acquitted.

"The reasonable expectations of the public would certainly include the belief that a judicial officer will not make an overt ... attempt to influence the outcome of any case to the detriment of any party," the sanctioning letter states. "Few things are more damaging to the judiciary than stories of special treatment for some and not others."