Steep Grade Ahead: Intrepid Takahik club members encounter The Crushinator and live to tell the tale 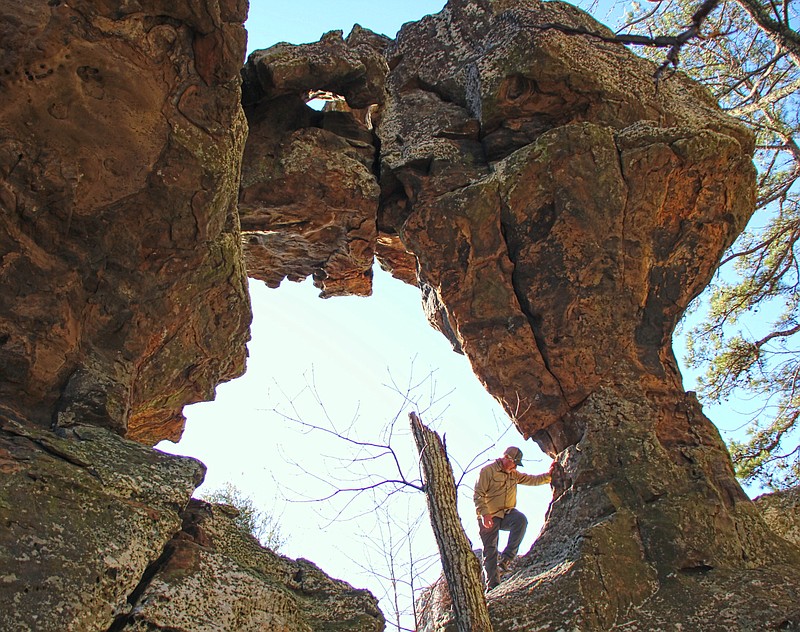 Tim Bollinger, a member of the Takahik club, risks the wrath of The Crushinator during a day hike Dec. 17, 2022, to explore that rock formation north of Clarksville. The Crushinator was named by Daniel Frew, who came across it while trying to find a cave associated with the Jesse James gang. (Special to the Democrat-Gazette/Bob Robinson)

By the time I discovered the Takahik outing on Facebook, it had already maxed the 18-hiker limit.

I missed an earlier hike into this part of Johnson County and have been listening to my hiking buds rave about massive rock formations, numerous caverns and the always fun "dirty bottom slides." I didn't want to miss it again.

I contacted Danny Hale, president of the Takahik club, asking if he could squeeze in a couple more people. Luckily the hiking gods were watching over me; two hikers had just dropped off the list. So, game on!

Hikers were instructed to meet at 8 a.m. at Tucker Coliseum in Russellville or at 8:30 at the Wrecked Canoe Bistro & Patio in Clarksville. Driving from Fort Smith, I chose to sleep in another 30 minutes and rendezvous with the group in Clarksville.

Fellow adventurer Jill Skaggs was leading this exploration. Knowing there was limited parking at the trailhead, she had arranged a secure parking area at the bistro. At 8:30 sharp, she began directing vehicles around like a traffic cop. After waving the stay-behind vehicles into the fenced lot and motioning the remaining vehicles to form a line behind a black Jeep, she climbed into the Jeep to lead our merry caravan of trekkers north on Arkansas 21.

From paved highway to gravel road, to dirt forest roads, then narrow double track paths, driving conditions continued to digress as we followed the Jeep to parking area No. 2.

"You're welcome to continue to drive your vehicle another three miles to the beginning of the hike," Skaggs explained. "But the road gets rougher, and there are potentially deep-water crossings."

Rougher? I wasn't impressed with the road conditions to that point.

Evidently, others shared my opinion as the group began maneuvering vehicles into pullouts alongside the narrow path. Several people crammed into Glen Pagan's Jeep Wrangler and the cab of Jorge Garcia's Ford F150 pickup, sporting a 6-inch lift and 35-inch tires. The remainder of us climbed into the truck bed.

As we crept along — six creek crossings and many large boulders in the pathway — I was glad I'd left my vehicle behind. At one point, the creek had altered its course from crossing the path to following the route of least resistance, which was our road. We were now driving in the newly formed creek bed.

Parking area No. 3, in an open green wildlife food plot, is where we began our hike.

The group walked along the abandoned road, bordered on each side by the tall ridges of the Mac Wood Mountain range. Hikers paused periodically to snap just one more picture of the uniquely sculptured frost flowers.

"This is where we need to leave the road," Skaggs explained, gesturing up the steep mountainside.

Gallery: The Crushinator and Sandstone Palace

The climb was only about three-tenths of a mile, but it was straight up with no false summits to tease us into believing we were almost to the top.

Initially, hikers followed in Skaggs' footsteps. As she became entangled in briar thickets, several climbers drifted off to seek their own routes. Others continued behind her, believing that once she broke through, it would open a path for them. Riiiight!

The briars were dense and clingy, tugging at clothing and pulling hats off heads. I took home a souvenir from the hike in the form of a bloody scratch across my forehead. Note to self: Do not lead with my head through a briar patch.

It was fun tramping through the woods with this seasoned group of bushwhackers. No one complained or moaned about the prickly plants or the steep grade up the mountain. Such trials just come with the adventure of exploring undeveloped forests.

Near the end of our climb, The Crushinator's head peered over the treetops at his approaching visitors. We soon arrived at the base of the formation. Following the rock face around to the left, we were standing under it. As I peered overhead, I understood how Daniel Frew arrived at the name.

A Takahik member and self-described history buff, Frew had read a story about a cave associated with the 19th-century outlaw Jesse James. James and his gang supposedly hid out in a cave near land owned by a gang member's relative. Based on additional research, Frew began exploring the Mac Wood Mountain area in search of the cave. These explorations brought him to the rock formation.

Standing directly under the huge boulder precariously wedged above the opening, he looked up, and a thought crossed his mind. At any moment the massive rock could fall and crush him. Thus, "The Crushinator" was born.

Continuing around the bluff, we made our way to the top of a ridge level with The Crushinator. A panoramic view of the jagged bluff line across Spadra Creek Valley was unveiled.

As I zoomed my camera across the valley at a waterfall pouring over a rock ledge, I realized I had hiked in this area before. It was when I was traipsing across the hillside searching for Aspen and Lucy Falls. The same falls which were now in my camera viewer. What a small world.

AND THERE IS MORE

Just when I thought the climb was behind us, we encountered yet another ascent before the official summit. The vantage from this exposed ledge was even more spectacular than the earlier vista. Our southern view provided a profile of The Crushinator for a final goodbye.

This would have made a great lunch spot, but we had a special chamber reserved for the break at Sandstone Palace.

With views of more rock pedestal columns below the ridge and sheer cliffs across the valley, we trekked along the ledge until we found a break in the bluff for our first "dirty bottom slide."

The narrow gap in the sheer bluff line provided a near 70-degree slope for us to reach the lower bench. Hikers had the option of using their hiking poles to sidestep down the steep grade or lowering their bottom to the ground and sliding.

The guys chose option one, even though we usually ended up falling on our bottoms and sliding anyway. But all the women chose to lower themselves gracefully to the ground, then perform a "somewhat" controlled slide through deep leaves, laughing and giggling along the way.

The chute delivered us to the entrance of Sandstone Palace. For eons, water has loosened the natural cement bonding rock particles together, allowing more water and wind to carry away the grains of sand and create these connected chambers of shallow caves.

As we explored the dozen or more caves, I tried to imagine people who once used the cavities for shelter. My first thought was the caves may have been a regular stopover for early American Indian hunter groups. I also considered what a find the shelters would have been for early cave dwellers.

We discussed whether the stones stacked at the opening of one major chamber were remnants of early visitors or from more recent campers.

Also, who was Jed, the name etched on a wall? Artifact or vandalism?

The group chose one particularly inviting chamber as our lunch site. Munching on snacks, we shared observations from the hike and discussed plans for future outdoor adventures.

With a happy belly and a bright sun warming my body, the bed of dry leaves piled at the base of the bluff line were calling me to come nap.

That proved to be wishful thinking. After the lunch break, it was onward, down the mountainside.

There were a couple more dirty bottom slide opportunities. Overall, the descent from that point was manageable in an upright position. Once on level ground again, all that remained was to follow the stream back to our vehicles.

That is, other than the two water crossings.

By leaning on hiking poles while stretching our legs to reach strategically located rocks, and then making a short hop to the creek bank, we bridged the first stream somewhat dry.

As it turns out, the tricky rock hop proved to be a wasted risk. Maintaining dry feet on the next crossing wasn't going to happen. With the vehicles almost in view, no one even bothered removing their boots for a barefoot crossing. Water levels reaching our knees, we finished the walk out in squishy boots.

The main topic of discussion for the remainder of the hike was who had the dirtier bottom. The elected method for resolving this was for me to take a picture of everyone's bottom for comparison.

And the Queen of Dirty Bottoms is?

Note: For detailed directions for this and other hikes, see Danny Hale's "Bluffs of the Arkansas Ozarks" guidebook. It's one of the Arkansas hiking books at takahik.com.