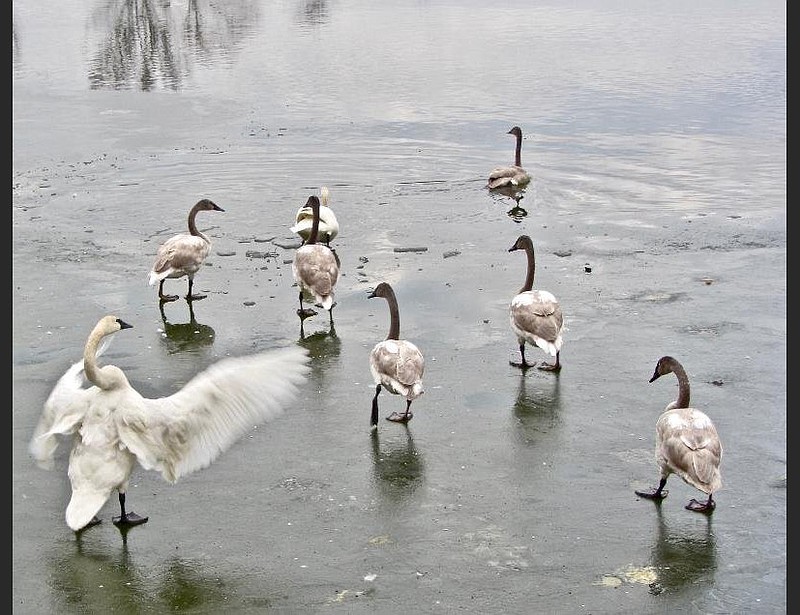 An adult swan flaps its wings near a number of nearly grown juveniles. (Special to the Democrat-Gazette/Marcia Schnedler)

MAGNESS LAKE — The winter swan dives at Magness Lake are not performed by daredevil humans braving the chilly waters. The maneuvers, as much a dip as a dive, are a feeding technique employed by Arkansas' most gorgeous seasonal visitors.

Trumpeter swans, the largest waterfowl native to the United States, are spending their 31st consecutive winter a half-dozen miles east of Heber Springs at Magness Lake and two nearby unnamed lakes. Boasting wingspans up to 8 feet, they arrive in Cleburne County each November. They migrate back north around late February.

The white adults weigh up to 40 pounds. The juveniles have gray or brown patches of plumage on a white background. Adult trumpeters usually mate for life and usually stay with the three or four of their offspring for the first year or so, until the youngsters are nearly grown up.

Trumpeters have their own nomenclature, some of it shared with other swan species: A male is a "cob." A female is a "pen." A young trumpeter is a "cygnet." For a group, "flock" or "herd" is suitable, but "bevy" is more specific. In flight, a group is a "wedge." On the ground, the term is "bank," because the swans gather near the banks of lakes and rivers.

Their hard-flapping takeoffs bring to mind a seaplane straining to make it aloft. Once airborne, they swoop as gracefully as a glider. The chance to see a wildlife sight so grand is a precious treat, more so given the threat to so many species everywhere on our planet packed with 8 billion humans.

Nearly driven to extinction around 1930 when their known U.S. count had fallen to 70, the trumpeters now number an estimated 45,000 to 50,000, mostly in the Upper Midwest and Mountain states. Arkansas is the farthest south they've been seen.

They are best viewed at Magness and the other two lakes from ­mid-afternoon to dusk, after they return from feeding elsewhere. There seem to be more of them here this winter than in the last couple of years.

The owners of Magness, where the first three trumpeters were spotted in 1992, permit access to the viewing site with free parking at a bend on Hays Road next to the water. Only a wire fence separates fascinated humans from the big birds, who often mingle afloat with one or more duck species. 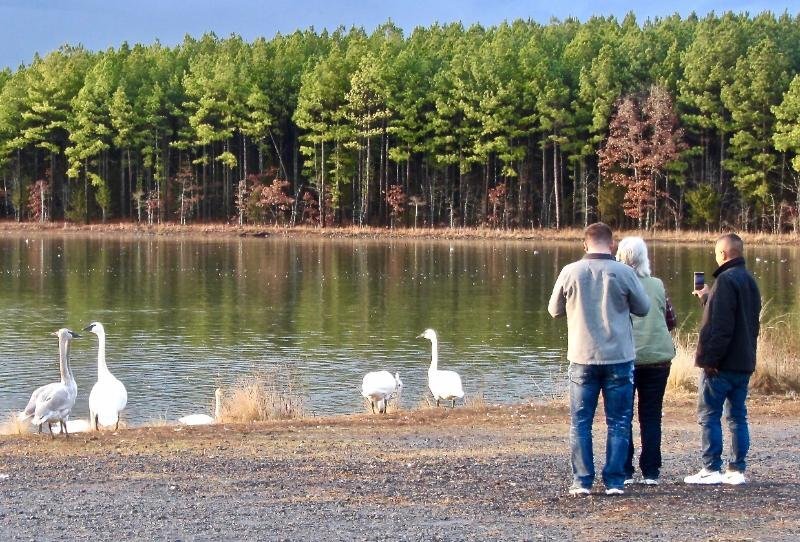 Visitors admire trumpeter swans at an unnamed Cleburne County lake. (Special to the Democrat-Gazette/Marcia Schnedler)
Often there are more trumpeters at the nearby unnamed lakes, whose owner has placed corn feeders on the shoreline of the 22-acre and 14-acre bodies of water. There are no fences here, and the swans generally tolerate photo-snapping humans. Courtesy and common sense call for keeping a respectful distance. As at Magness, pets must be kept in vehicles.

Even with today's much larger U.S. population of trumpeters, and more in Canada, their future is not assured. Perils include loss of habitat, as well as lead poisoning from shotgun pellets, which the swans may swallow to help in digesting hard grains. Their uncertain fate is another reason to visit the lakes sometime this month or next.

To visit Magness Lake, drive east for 4 miles on Arkansas 110 from its intersection just east of Heber Springs with Arkansas 5/25. Turn left on Hays Road to reach the lake's parking and viewing area in about a half-mile.

For the nearby unnamed swan lakes, head about 2 ½ miles east on Arkansas 110 from the Arkansas 5/25 intersection. Turn right on Hiram Road, marked with a small "Swans" sign to reach the first lake in about 4 miles at a narrow lane, then the second in another mile.

Heber Springs Chamber of Commerce sometimes has updates on the presence of the trumpeter swans. Visit heber-springs.com or call (501) 362-2444.