Jan. 6 panel shuts down after 18 months 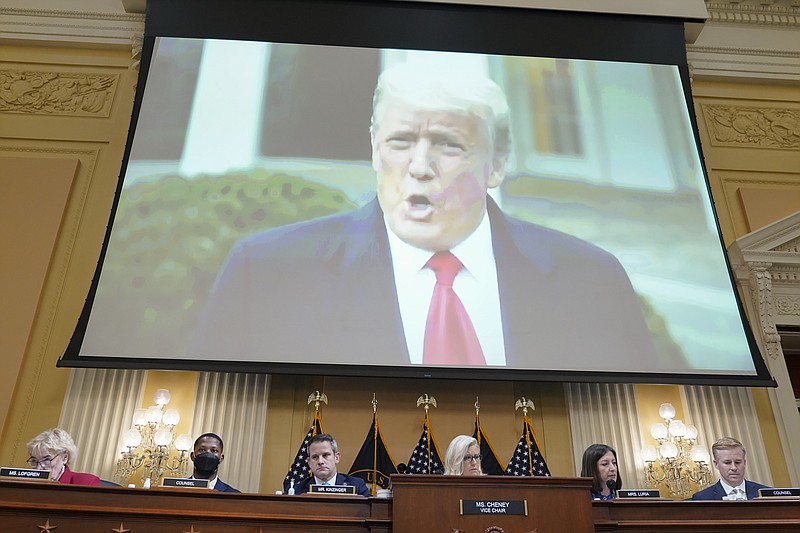 FILE - A video of former President Donald Trump speaking on Jan. 6, 2021, plays as the House select committee investigating the Jan. 6 attack on the U.S. Capitol holds a hearing at the Capitol in Washington, July 21, 2022. The House Jan. 6 committee is shutting down, wrapping up a whirlwind 18-month investigation of the 2021 Capitol insurrection and sending its work to the Department of Justice along with a recommendation for prosecuting the former president. (AP Photo/Patrick Semansky, File)

WASHINGTON -- The House Jan. 6 committee is shutting down, having completed a whirlwind 18-month investigation of the 2021 Capitol riot and having sent its work to the Justice Department along with a recommendation for prosecuting former President Donald Trump.

The committee's time officially ends today when the new Republican-led House is sworn in. With many of the committee's staff already departed, remaining aides have spent the past two weeks releasing many of the panel's materials, including its 814-page final report, about 200 transcripts of witness interviews, and documents used to support its conclusions.

Lawmakers said they wanted to make their work public to underscore the seriousness of the riot and Trump's claims of election fraud.

"Accountability is now critical to thwart any other future scheme to overturn an election," Chairman Bennie Thompson, D-Miss., and Vice Chairwoman Liz Cheney, R-Wyo., wrote in a departing message on Monday. "We have made a series of criminal referrals, and our system of Justice is responsible for what comes next."

Some of the committee's work -- such as videotape of hundreds of witness interviews -- will not be made public immediately. The committee is sending those videos and some other committee records to the National Archives, which by law would make them available in 50 years. Members of the committee said they didn't release that videotape now because it would have been too difficult to edit it and redact sensitive information.

Incoming Republican leaders may try to get those materials much sooner, though. A provision in a package of proposed House rules released Sunday calls for the National Archives to transfer "any records related to the committee" back to the House no later than Jan. 17.

It is unclear whether the GOP-led House could enforce the provision and what they would do with the materials.

House Minority Leader Kevin McCarthy, a California Republican who is his party's nominee for speaker of the House, sent a letter to Rep. Thompson in November demanding the preservation of "all records collected and transcripts of testimony taken during your investigation."

"The official Congressional Records do not belong to you or any member, but to the American people, and they are owed all of the information you gathered -- not merely the information that comports with your political agenda," the letter states.

House Republican leaders have previously indicated plans to investigate why the Capitol was so easily breached and whether the governing body overseeing Capitol Police needs to be changed.

House Speaker Nancy Pelosi, D-Calif., already named the House Committee on House Administration the custodian of the records. Under current House rules, the committee is obligated to hand over the official records to the House clerk, who transmits them to the National Archives. The rules also prevent the National Archives from releasing committee records for at least 30 years. Sensitive records, such as those from a major investigation, can be held up to 50 years before being made public.

The committee, which is due to officially disband at 11:59 a.m. Eastern Standard Time today, has published hundreds of interview or deposition transcripts and thousands of pages of evidence cited in the report to an online repository housed by the Government Publishing Office. Much of that information was published over the weekend, including dozens of previously unreleased transcripts, expert statements and nearly 400 documents cited in the report. Videos shown during the committee's nine hearings in 2022 are included in the repository, and at least 75 videos are already available.

The committee generally released only the information that was cited in its report. Most of what it released appears tailored to back up the conclusions of its final report and emphasize what the committee thought was most relevant to its investigation. The rest of the material the panel obtained -- often by subpoenaing agencies and individuals -- was expected to enter the National Archives.

Among the information that wasn't made public and was expected to go to the National Archives are emails and text messages that witnesses or federal agencies provided to the committee that were not referenced in the final report. Raw footage from witness depositions, police video cameras or documentary filmmakers that was not shown during hearings was also expected to go to the National Archives.

Experts were already concerned that a limited release of information would harm the committee's goals of accountability and guaranteeing the historical record is as accurate as possible. People closely watching the hearings, including journalists and government watchdog groups, have been anxiously waiting to see what raw information the panel would provide so they can continue examining avenues the committee didn't fully explore.

END OF THE COMMITTEE

The committee's conclusion comes after one of the most aggressive and wide-ranging congressional investigations in recent memory. The panel formally or informally interviewed more than 1,000 witnesses, collected more than 1 million documents and held 10 well-watched hearings. The two Republicans and seven Democrats on the panel were able to conduct the investigation with little interference after McCarthy declined to appoint minority members, angry that Pelosi had rejected two of his suggested appointments.

In the end, the panel came to a unanimous conclusion that Trump coordinated a "conspiracy" on multiple levels, pressuring states, federal officials and lawmakers to try to overturn his defeat, and inspired a violent mob of supporters to attack the Capitol and interrupt the certification of President Joe Biden's win. The panel recommended that the Justice Department prosecute Trump on four crimes, including aiding an insurrection.

While a so-called criminal referral has no real legal standing, it is a forceful statement by the committee and adds to political pressure already on Attorney General Merrick Garland and special counsel Jack Smith, who is conducting an investigation into Jan. 6 and Trump's actions.

"I have never been involved in anything as wide ranging and intense," Lofgren said.

She said that at the beginning of the probe, she felt it would be a success if there was a renewed enthusiasm for protecting democracy. In the November midterm elections, 44% of voters said the future of democracy was their primary consideration at the polls, according to AP VoteCast, a national survey of the electorate.

Lofgren said she believes the committee made clear that Trump was responsible for the insurrection and "it was not done at the last minute."

"I think we proved that and we sent it all to the Department of Justice," Lofgren said. "We'll see what they do."

Information for this article was contributed by Mary Clare Jalonick of The Associated Press and by Sarah D. Wire of The Los Angeles Times (TNS).