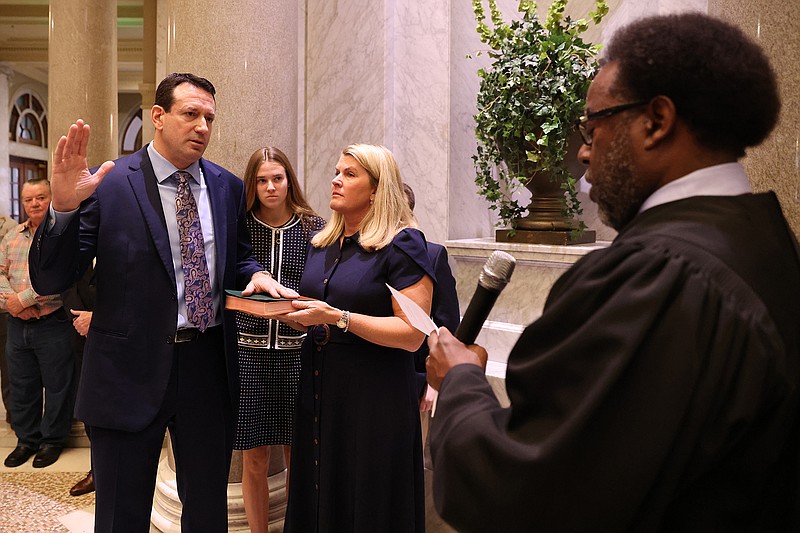 Will Jones, far left, is sworn in as the 6th Judicial District prosecuting attorney by the Hon. J. Leon Johnson, far right, at the Pulaski County Courthouse in downtown Little Rock on Monday, Jan. 2, 2023. Jones was joined at the swearing in ceremony by his wife Paula Jones, center, and daughter Caroline, second from left. (Arkansas Democrat-Gazette/Colin Murphey)

About 10 years after he originally left the office, Will Jones said it was "a humbling experience" to stand in the Pulaski County Courthouse and be sworn in as the 6th Judicial District's newest elected prosecutor.

Jones, 47, was sworn in Monday by Judge Leon Johnson in the courthouse's main atrium, underneath the stained-glass windows of the building's dome. The room was filled with Jones' friends, family, community leaders and supporters.

He is the first newly elected prosecutor for the 6th Judicial District in 26 years. He follows Larry Jegley, who held the role unchallenged since 1996. Jegley announced last year he wouldn't seek the office again due to a severe case of vertigo.

A native of Murfreesboro who once worked under Jegley, Jones defeated Alicia Walton in the November election to represent the district that covers Pulaski and Perry counties. He comes into office after previously serving as the chief deputy prosecutor for the 11th Judicial District West (Jefferson and Lincoln counties).

He started his career in the Crawford County prosecutor's office, where he worked for nine months before moving into the Pulaski County office under Jegley. He stayed there until going to the attorney general's office.

"He's got all the tools in the toolbox to pick up with what we built all of these years and carry on with the largest prosecuting office in the state," Jegley said last month. "This office is large. We have 48 full-time attorneys and seven deputy prosecuting attorneys on a covid backlog."

Jones' wife, North Little Rock District Judge Paula Jones, stood next to him as he was sworn in .

Afterward, she donned her own judge gown and swore in the deputy prosecutors and investigators.

"Really, (today's) about him achieving a goal that he set a long time ago," Judge Jones said. "He knew this was the only thing that he wanted to do. ... it's an emotional day for all of us."

Due to the Jones' marriage, the North Little Rock city attorney will handle misdemeanor cases instead of Will's office, to avoid conflicts of interest.

After the swearing in was complete, Jones gave a short speech to mark the occasion.

Jones said he had been trying to think of a mission statement to help guide his office.

"Humbly serving to protect our children, families and our community," Jones said. "These are the things that we do every day. But we don't really talk about them in the decision-making process. The first part of that is humility, it's the character trait that I most admire in the people that I look up to. You can't be a great leader unless you recognize your own faults and weaknesses and work every day to improve those."

Jones said his office will need to have the humility to admit that "we don't know everything" when it comes to the cases it handles.

Jones touched on the relationship between his office and the public.

"We answer to the public and the public can be a harsh critic at times," Jones said. "We have to understand that that's why we're here and we have to be judged against the standard that the community will accept. And we're going to work every day to live up to that standard. People won't always agree with our decisions, in fact, 50 percent of the people involved in any decision we make are going to disagree with it. But if we follow a process, they can respect the process."

Jones reiterated this with an anecdote from his first tenure in the 6th Judicial District office.

"I was there with the law clerks and the younger attorneys and I used to tell them, we go through the same process, whether it's a misdemeanor or a low-level crime or capital murder," Jones said. "We go through the same analysis and the same process to try to reach the best decision that we can and in the end, people may disagree with our individual decisions at times, but they can't disagree ... with the process by which we make that decision."

Jones enters office with Little Rock's having experienced its record for most murders in a year in 2022.