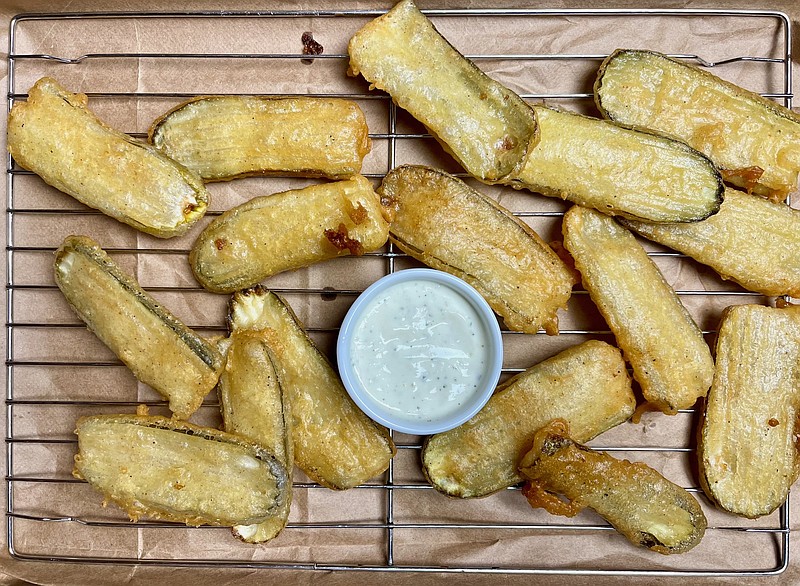 Last week, in those lazy days between Christmas and New Year's Eve, my husband asked me to make fried pickles.

I've fried a lot of things, but never pickles. Don't get me wrong, I love fried pickles. I'd just never made them myself, preferring to let someone else deal with all that oil.

My first stop when I need a recipe is, naturally, the newspaper archives.

I'm always a little surprised when I'm looking for recipes that originated in Arkansas and get very few results in a search. Possum pie, chocolate rolls, fried pickles — these foods all have roots in or are closely associated with the Natural State, yet there aren't many Arkansas newspaper recipes for them.

I found just five recipes for fried pickles. One can hardly be called a recipe considering it was simply instructions with no measurements. Three of the remaining four are nearly identical. So really, I found two recipes.

I then expanded my search to other Arkansas publications, where I found Kat Robinson's recipe at tiedyetravels.com. Taking notes from those three recipes, plus using my personal knowledge of fried food, I came up with the recipe below.

But first, a little about the history of fried pickles.

According to the Central Arkansas Library System's Encyclopedia of Arkansas, fried dill pickles got their start in Atkins in the early 1960s, back when the Pope County town was the pickle capital of the world. (For the record, several other towns across the U.S. with pickle plants also made this claim to fame, including St. Charles, Ill.; Wiggins, Miss.; and Berrien Springs, Mich.)

And like most culinary creations, it's unlikely they were invented by just one person. But there's no question about who made them popular: Bernell "Fatman" Austin, owner of The Duchess Drive In on U.S. 64 in Atkins. Austin first served them at The Duchess in 1963 for 15 cents an order; and not long after, they were appearing on menus across the South.

My recipe differs from many in that I use refrigerated, not shelf-stable, pickles. Their superior texture stands up well to being fried. I prefer long slices rather than spears or hamburger slices. The lengthwise slices solve both issues I have with the traditional shapes: Spears are too juicy, and the breading usually falls off after the first bite. Hamburger slices aren't juicy enough, and tend to have too high a batter-to-pickle ratio.

Adding a hefty amount of cornstarch and a bit of baking powder keeps the coating light and crispy, while club soda (along with that baking powder) adds some lift. You can make it as spicy or as mild as you like by adding more or less cayenne.

I can honestly say these were among the best fried pickles I've ever had.

Drain the pickles, reserving ¼ cup of the brine. Arrange the slices in a single layer on the prepared baking sheet. Blot tops dry with paper towels. Set aside.

In a medium bowl, whisk together the flour, cornstarch, cornmeal, baking powder, salt, black pepper and cayenne. Whisk in the reserved pickle brine and the ½ cup of club soda. Whisk until smooth. Cover and refrigerate 30 minutes to 2 hours.

Add enough oil or shortening (I used a combination) to a Dutch oven or heavy pot to fill 1 ½ to 2 inches. Heat to 350 to 375 degrees. (If you don't have a deep frying thermometer, an easy way to tell when your oil is hot enough is to add a couple of unpopped kernels of popcorn to your pot with the oil. Popcorn pops at 355 degrees, so when the corn pops, your oil is ready for frying.)

Dip each pickle slice in the batter, coating both sides and letting the excess drip back into the bowl. (If your batter is too thick, add another tablespoon or two of club soda.) Carefully lower each slice into the hot oil. If necessary, nudge the slices to keep them from sticking to the bottom of the pot, and fry until golden brown and crisp, about 3 minutes, turning once or twice. Add as many slices as will fit in your pot without crowding. I fried 4 or 5 at a time. Transfer to paper towels or a slit-open brown paper bag to drain.

Repeat with remaining slices and batter.