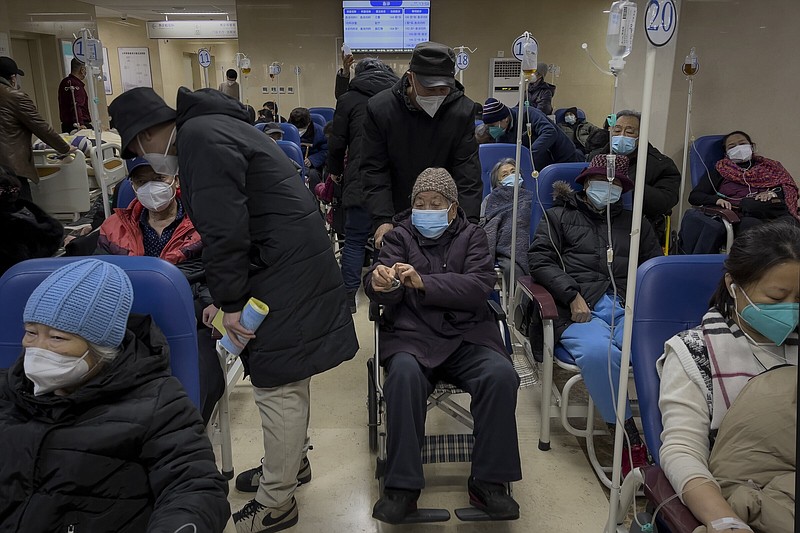 A man pushes an elderly woman past patients receiving intravenous drips in the emergency ward of a hospital, Tuesday, Jan. 3, 2023. As the virus continues to rip through China, global organizations and governments have called on the country start sharing data while others have criticized its current numbers as meaningless. (AP Photo/Andy Wong)

BEIJING -- The Chinese government sharply criticized covid-19 testing requirements imposed on passengers from China and threatened countermeasures against countries involved, which include the U.S. and several European nations.

"We believe that the entry restrictions adopted by some countries targeting China lack scientific basis, and some excessive practices are even more unacceptable," Foreign Ministry spokesperson Mao Ning said at a daily briefing Tuesday.

"We are firmly opposed to attempts to manipulate the covid measures for political purposes and will take countermeasures based on the principle of reciprocity," she said. Mao did not specify what steps China might take.

Australia and Canada this week joined a growing list of countries requiring travelers from China to take a covid-19 test prior to boarding their flight, as China battles a nationwide outbreak of the coronavirus after abruptly easing restrictions that were in place for much of the pandemic.

Some countries have applied the requirements to passengers from Hong Kong and Macao, both semiautonomous Chinese territories, as well as mainland China.

Other countries including the U.S., U.K., India, Japan and several European nations have announced tougher covid-19 measures on travelers from China amid concerns over a lack of data on infections in China and fears of the possibility that new variants may emerge.

French Prime Minister Elisabeth Borne defended the tests. Starting today anyone flying from China to France will have to present a negative virus test taken within the previous 48 hours and be subject to random testing on arrival.

The U.K. will require that passengers from China take a covid test before boarding the plane from Thursday. Transport Secretary Mark Harper said the requirement is for "collecting information" because Beijing isn't sharing coronavirus data.

Health officials will test a sample of passengers when they arrive in the U.K., but no quarantine is required for those who test positive, he said.

Sweden's Public Health Agency said Tuesday it had urged the government to require travelers from China to present a recent negative covid-19 test.

Austria plans to test the wastewater of all planes arriving from China for new variants of the coronavirus, the Austria Press Agency reported Tuesday, following a similar announcement by Belgium a day earlier.

Hong Kong Chief Secretary Eric Chan wrote on Facebook that the government had written to various consulates Monday to express its concerns over the "unnecessary and inappropriate" rules.

Chinese authorities previously said from Sunday, overseas travelers would no longer need to quarantine upon arriving in China.

Information for this article was contributed by John Leicesteris, Sylvia Hui, Jan M. Olsen, Kanis Leung and Frank Jordans of The Associated Press.