Razorbacks rally from 17 down to beat 20th-ranked Missouri 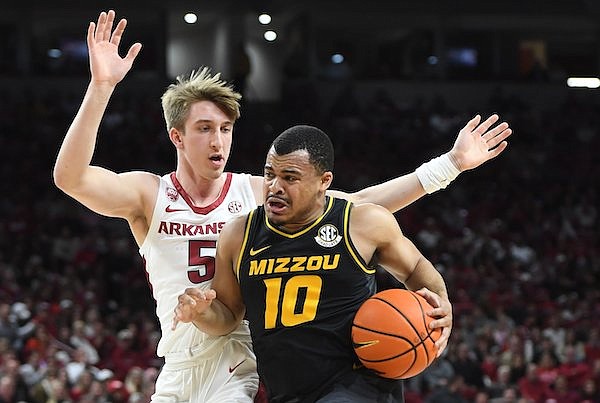 Arkansas guard Joseph Pinion (5) defends Wednesday, Jan. 4, 2023, as Missouri guard Nick Honor (10) drives to the lane during the first half of play in Bud Walton Arena in Fayetteville.

FAYETTEVILLE — An Arkansas freshman put on a show Wednesday night at Bud Walton Arena, but not one of the ones you might expect.

Joseph Pinion, a Morrilton native, set season highs in points and minutes, and sparked the 13th-ranked Razorbacks to a come-from-behind 74-68 victory over No. 20 Missouri in the SEC home opener for Arkansas.

The Razorbacks (12-2, 1-1 SEC) trailed by as many as 17 points before halftime. They snapped a three-game win streak for the upstart Tigers (12-1, 1-1), who had won by a combined 36 points in their most recent outings against Illinois and Kentucky.

Pinion led the Razorbacks in scoring for a time, until Ricky Council emerged with a big second half to finish with a game-high 25 points.

He hit a three-pointer with 30 seconds remaining before halftime to cap an 8-0 run that pulled Arkansas to within 34-27 after a mostly lackluster first half. In the second half, Pinion was key in multiple plays that helped the Razorbacks take control of the game.

His three with 16:55 remaining trimmed Missouri’s lead to 38-37. Minutes later, Pinion dove on the floor to steal the ball from Sean East, leading to a run-out dunk by Council to pull the Razorbacks to within 42-41.

Davonte Davis’ reverse layup with 14:23 remaining gave Arkansas its first lead at 43-42, and Pinion drained a three on the next possession to force a Mizzou timeout as the home crowd roared.

The Tigers tied the game 46-46 with 11 minutes to play, but Arkansas took the lead for good on the ensuing possession with a three-pointer by Council, the SEC’s third-leading scorer who had 21 points after halftime.

The Razorbacks extended their lead to eight points on two occasions. Nick Honor made only the front end of two free throws with 27 seconds remaining to pull Missouri to within 69-66. Council made 5 of 6 free throws in the final 25 seconds to ice the game.

Arkansas was cold in the first half and went to the locker room shooting 10 of 28 overall, 2 of 12 from three-point range and 5 of 10 from the free-throw line. Thirteen of the Razorbacks’ first 18 points followed an offensive rebound.

Arkansas had a 40-23 advantage in rebounds, including 15-9 in offensive boards. The Razorbacks finished with 17 second-chance points.

The Razorbacks scored 18 of the game’s next 22 points. A jumper by Davis and a three-point play by Kamani Johnson began Arkansas’ 8-0 run to end the half.

Davis scored 10 points and had 5 rebounds, 5 assists and 5 turnovers.

The Razorbacks played their ninth game without freshman guard Nick Smith, who has not played since Dec. 17 due to a knee injury. Smith, a projected lottery pick in this year’s NBA Draft, was not at the arena while he visited a specialist out of state.

Arkansas is scheduled to play again at No. 22 Auburn on Saturday at 7:30 p.m.