McCarthy fails to win speaker of the House

GOP looks to regroup after a day of turmoil by Compiled by Democrat-Gazette Staff From Wire Reports | January 4, 2023 at 5:27 a.m. 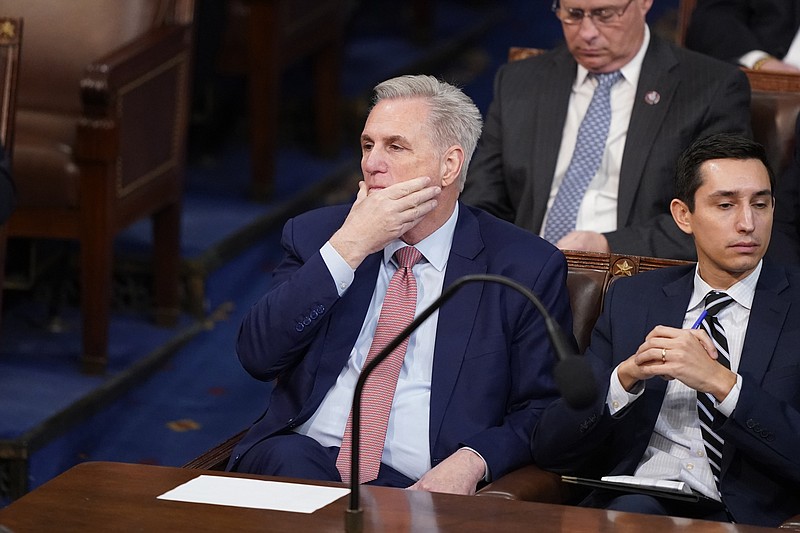 Rep. Kevin McCarthy, R-Calif., listens as the second round of votes are cast for the next Speaker of the House on the opening day of the 118th Congress at the U.S. Capitol, Tuesday, Jan. 3, 2023, in Washington.(AP Photo/Alex Brandon)

WASHINGTON -- Failing to elect party leader Kevin McCarthy as the new speaker of the House, Republicans adjourned in disarray Tuesday night, ending a raucous first day of the new Congress but hoping to somehow regroup today from his historic defeat.

The abrupt end to the day showed that there is no easy way ahead for McCarthy, who promised to fight to the finish to claim the gavel despite opposition from the chamber's most conservative members. Needing 218 votes in the full House, McCarthy got just 203 in two rounds -- less even than Democrat Hakeem Jeffries in the GOP-controlled chamber -- and fared even worse with 202 in round three.

Tensions rose as night fell on the new House majority, and all other business came to a halt. The House agreed to return at noon today.

"Kevin McCarthy is not going to be a speaker," declared Rep. Bob Good, R-Va., one of the holdouts.

McCarthy had pledged a "battle on the floor" for as long as it took to overcome right-flank fellow Republicans who were refusing to give him their votes. But it was not at all clear how the embattled GOP leader could rebound after becoming the first House speaker nominee in 100 years to fail to win the gavel with his party in the majority.

Without a speaker, the House cannot fully form -- swearing in its members, naming its committee chairmen, engaging in floor proceedings and launching investigations of the Biden administration.

"We all came here to get things done," said the second-ranking Republican, Rep. Steve Scalise, in a rousing speech urging his colleagues to drop their protest.

It was a tumultuous start to the new Congress and pointed to a difficult road ahead with Republicans now in control of the House. Lawmakers' families waited around, as what's normally a festive day descended into chaos, with children playing in the aisles or squirming in their parents' arms.

A new generation of conservative Republicans, many aligned with Donald Trump's Make America Great Again agenda, want to upend business as usual in Washington, and were committed to stopping McCarthy's rise without concessions to their priorities.

"The American people are watching and it's a good thing," said Rep. Chip Roy, R-Texas, who nominated fellow conservative Rep. Jim Jordan of Ohio as an alternative for speaker.

It was the second time conservatives pushed forward a reluctant Jordan, the McCarthy rival-turned-ally, who earlier had risen to urge his colleagues -- even those who backed Jordan -- to vote for McCarthy.

"We have to rally around him, come together," Jordan said.

But Republicans refused to do so Tuesday. By the third ballot, only one lawmaker had changed his position -- Rep. Byron Donalds of Florida, a member of the Freedom Caucus who shifted his support to Jordan, denying McCarthy the majority he needs.

Donalds later told reporters that he was open to voting for McCarthy again, underscoring the unwieldy nature of the process.

"Our conference needs to recess and huddle and find someone or work out the next steps, but these continuous votes aren't working for anyone," Donalds said in a statement.

Smiling through it all, McCarthy was nominated by the third-ranking Republican, Rep. Elise Stefanik of New York, who said the Californian from Bakersfield "has what it takes" to lead the House. But a challenge was quickly raised by Rep. Andy Biggs, R-Ariz., a conservative former leader of the Freedom Caucus, who was nominated by a fellow conservative as speaker.

Earlier, McCarthy strode into the chamber, posed for photos and received a standing ovation from many on his side of the aisle.

The mood was tense, at least on the Republican side, as lawmakers rose from their seats in lengthy in-person voting. Democrats were upbeat as they cast their own historic votes for their leader, Jeffries of New York.

In the first-round tally, McCarthy won 203 votes, with 10 for Biggs and nine for other Republicans. In the second, it was 203 for McCarthy and 19 for Jordan. On the third vote, McCarthy had 202 to Jordan's 20. Democrat Jeffries had the most, 212 votes, but no nominee won a majority.

"The one thing that's clear is he doesn't have the votes," Donalds told CNN before joining with those voting for McCarthy. "At some point, as a conference, we're gonna have to figure out who does."

The standoff over McCarthy has been building since Republicans appeared on track to win the House majority in the midterm elections in November. A new generation of Trump-aligned Republicans led the opposition to McCarthy, believing he's neither conservative enough nor tough enough to battle Democrats.

While the Senate remains in Democratic hands, barely, House Republicans are eager to confront Biden after two years of the Democrats controlling both houses of Congress.

In a private GOP morning meeting, McCarthy argued that the lawmakers opposing him were selfishly disrupting what was supposed to be a day of unity for their own personal gain.

"I earned this job," McCarthy told the group.

"Bull****!" came the response from Rep. Lauren Boebert of Colorado, one of the hard-right Republicans opposing him, according to two people who heard the exchange and described it on the condition of anonymity. She later told a reporter she did not shout anything during the meeting but would not say whether she had spoken up.

After the private GOP meeting, a core group of conservatives led by the Freedom Caucus and aligned with Trump were furious, calling the meeting a "beatdown" by McCarthy allies and remaining steadfast in their opposition to the GOP leader.

"This meeting wasn't about trying to inform people about what it takes to get to 218 and ask for what you want," Rep. Scott Perry, R-Pa., the chairman of the Freedom Caucus, told reporters. "This was about a beatdown and a simulated unity in the room that doesn't really exist."

The group said McCarthy had refused the group's last-ditch demand for rules changes in a meeting late Monday at the Capitol.

"If you want to drain the swamp you can't put the biggest alligator in control of the exercise," said Rep. Matt Gaetz, R-Fla.

Rep. Mike Rogers of Alabama, who is set to lead the Armed Services Committee, declared during the meeting that those who opposed McCarthy should lose their committee assignments, according to people in the room.

Three fruitless votes did not end McCarthy's bid for speaker. He has vowed not to back down until he secures the post, forcing multiple votes if necessary until he wins and raising the prospect of a grueling stretch of votes that could go on for days.

"I'm staying until we win," McCarthy told reporters between the second and third votes. "I know the path."

As the day began, outgoing House Speaker Nancy Pelosi gaveled closed the last session, moving aside for new House leadership in her Democratic Party, to a standing ovation from colleagues on her side of the aisle.

The chaplain opened with a prayer seeking to bring the 118th Congress to life.

Democrats enthusiastically nominated Jeffries, who is taking over as party leader, as their choice for speaker -- a typically symbolic gesture for the minority but one that took on new importance with Republicans at odds with one another.

Jeffries is the first Black politician to lead either party in Congress. And, at 52, he represents a generational change for House Democrats after two decades under Pelosi.

"A Latino is nominating in this chamber a Black man for our leader for the first time in American history," Rep. Pete Aguilar, D-Calif., said in nominating his colleague.

A son of civil servants who cut his teeth as a litigator at a law firm and at CBS, Jeffries rose swiftly through the ranks of Democratic politics in New York and Washington. Since 2013, he has represented Brooklyn.

"He does not traffic in extremism. He does not grovel to or make excuses for a twice-impeached, so-called former president," Aguilar, the No. 3 Democrat, said of Jeffries. "He does not bend a knee to anyone who would seek to undermine our democracy because, Madam Clerk, that's not what leaders do."

During the Trump presidency, Aguilar built a national profile as a sharp-tongued critic and impeachment prosecutor, while also working with Republicans to pass criminal justice reform legislation.

Democrats have been preparing Jeffries, a former chair of the House Democratic Caucus, for several years as a potential leader. But it was only after Pelosi decided to resign as speaker after last year's midterm elections that he stepped forward, alongside Aguilar and Rep. Katherine Clark of Massachusetts, his top deputies.

There was only negative history for the Republicans as McCarthy fell short, even with an endorsement from Trump. Until Tuesday, the House had not failed to elect a speaker on the first roll call vote since 1923, when the election stretched for nine ballots.

Next steps are uncertain. Scalise could be a next choice, a conservative widely liked by his colleagues and seen by some as a hero after surviving a gunshot wound suffered during a congressional baseball game practice in 2017.

Sen. John Thune, the No. 2 Senate Republican, said Tuesday afternoon that he still sees a "path" for McCarthy to become speaker of the House.

"If he's got the patience and is willing to grind it out, I still think there's a path forward for him," Thune said after McCarthy failed to gain enough votes on the first ballot. "Obviously it's definitely a speed bump, and we'll see if he can get over it ... on a future ballot."

Thune, of South Dakota, said the House was off to a "slow start" and that he hoped its members would figure it out and begin governing.

"I hope that they get this behind them and we can get a functioning, effective majority in the House, because it's going to be essential and necessary for us to get things done around here," he said.

Thune declined to say whether he thought Scalise could be a viable alternative to McCarthy.

Information for this article was contributed by Lisa Mascaro, Farnoush Amiri and Kevin Freking of The Associated Press, Catie Edmondson and Nicholas Fandos of The New York Times and by Eugene Scott of The Washington Post.

Gallery: McCarthy fails in marathon votes for speaker, not giving up