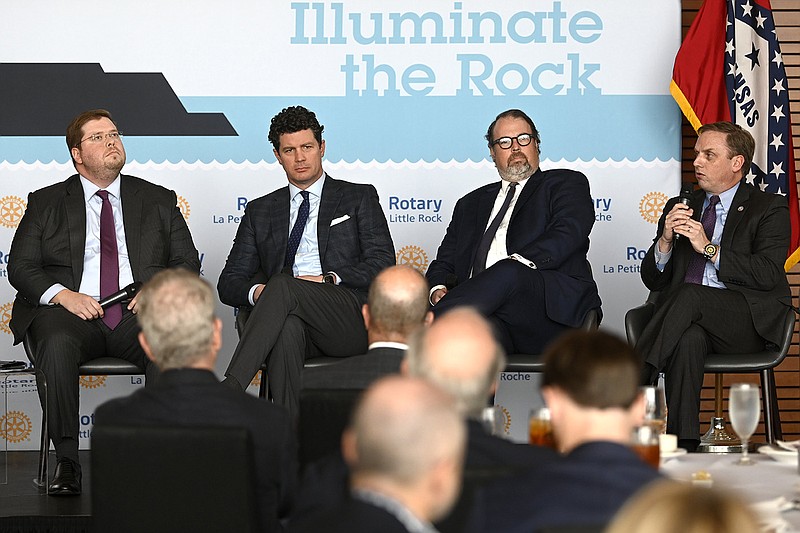 Workforce development also will be a priority for Sanders in the regular session that begins Monday, said Chris Caldwell, who managed Sanders' successful gubernatorial campaign.

Sanders will be sworn in next Tuesday as Arkansas' first female governor, succeeding term-limited Gov. Asa Hutchinson, who has served as the state's chief executive since 2015.

Sanders is a former White House press secretary for former President Donald Trump. Sanders' father, Mike Huckabee, served as the state's governor from July 1996 until 2007. Sanders, Hutchinson and Huckabee are all Republicans.

Asked about legislative priorities during a panel discussion about the coming session, Shepherd said, "I think that when you have a new governor, who was overwhelmingly elected, of the same party as the majority of the Legislature, what I anticipate is that you are primarily looking to the governor-elect as to what her priorities are.

"I felt like she has laid out really three things in particular when it comes to education, criminal justice and permanent tax reduction, so I anticipate that those are going to be the primary objectives when we meet," he told a luncheon meeting of about 120 people of the Rotary Club 99 of Little Rock at the William J. Clinton Presidential Center in Little Rock.

"Now in terms of what kind of timeline and how that works out, that still remains to be seen," Shepherd said.

There also will be things that are important to individual legislators or groups of legislators that will be worked on during the session, he said.

Caldwell said Sanders has indicated workforce development is a top priority during discussions about education and economic development.

Caldwell said Sanders also wants to empower parents "to not be stuck in a failing [education] system, to give them the choices they need to make the best choice for their children," as part of her LEARNS initiative.

A year ago, U.S. Steel Corp. announced it has chosen Osceola as the location for a new $3 billion steel mill and that completion and operation of the mill are scheduled for 2024.

Lobbyist Blake Eddins said Tuesday that he represents U.S. Steel, which has "a huge deal" for a large mill creating 900 jobs that pay six-figure salaries.

"There is a lot of industry headed up that way," he said. "We need people."

Eddins said, "We need skilled workers in this state.

"Right now, the people are there. They want the jobs. We have got to give them the opportunity to be able to step into these jobs," he said.

He said he expects Sanders to build on that and "hopefully surcharge it because there are some opportunities, even stuff that is not public right now that is kind of percolating, that would be a big deal for the state, but we cannot lock them down. We can't get them here unless the workforce is available."

Jon Gilmore, a lobbyist and Hutchinson's chief political strategist, said Hutchinson indicated he wanted to be "the jobs governor" before he was elected as governor in 2014, and he fulfilled that during his eight years in the office.

"Governor-elect Sanders said she wants to be education governor, and with that comes job creation," he said.

Gilmore said one of his clients is CRH Americas Materials, Inc., which employs about 3,000 people in Arkansas. The company describes itself as the leading vertically integrated supplier of materials, paving and construction services across North America.

"They struggle to find good workers," he said.

"And if you ask any industry in the state, whether it be in welding, or in heating and air or electricians, for so long we have put such an emphasis on a four-year college degree, and I think that is going to have to shift to look and see for the future how do we keep and retain talent in Arkansas,' Gilmore said

"It is not just about bringing talent across the border. It is about keeping what we have here," he said.

Taxpayers will save approximately $750 million every year as a result of income tax cuts implemented under Hutchinson, according to Scott Hardin, a spokesman for the state Department of Finance and Administration.

The state's top individual income tax rate has dropped from 7% to 4.9% under Hutchinson. But Gilmore said Arkansas still is "at a disadvantage when it comes to taxes in Arkansas, considering our surrounding states."

"I am excited about Governor Sanders' look at the future and the Legislature to say how can we do this in a prudent and pragmatic approach and how we can assure that we give money back to hard-working taxpayers while at the same time keeping the commitments to education that are vitally important, keeping the commitments to this highway that is running out here, which is vitally important, and making sure that our criminal justice system has its commitments made as well," he said.

Asked where Sanders sees the floor and the ceiling regarding tax cuts, Caldwell said Sanders has repeatedly indicated during her campaign that "this has to be done in a responsible manner" over a period of time. She has said she would begin phasing out the state income tax.

"I think all the naysayers and the opponents of this say the same thing: 'We are going to bankrupt the state,' " he said. "We are not going to do that.

"This is not a snap, hey, we are going to walk in and just [phase out the state income tax]," Caldwell said.

"I think that [the tax cuts] will be prudent in the same way that ... the current administration has done so," he said.

"Everybody focuses on cutting the services and doing away with this and that, and there is always in government plenty of [inefficiencies] and waste and fraud and abuse," Caldwell said.

Sanders "has spoken [about] lifting and growing the economy, and so that's the linchpin there," said Caldwell, who last month announced the creation of Caldwell Consulting, a full-service lobbying, government relations and political consulting firm.

Shepherd said Hutchinson and the Legislature have approached tax cuts in a pragmatic, prudent and responsible fashion over the past several years, and income tax cuts have been a priority during this period.

"I think the proof is largely in the pudding when you look at what we have been able to do," he said.

"We have cut taxes significantly while at the same time we have built up a catastrophic reserve fund, which previously did not exist," Shepherd said. "On top of that, we've built up a surplus as well."

State lawmakers have tried to make sure that state government is in as strong a financial position as possible as they think where the economy is headed in the next several years, and hold the growth in state spending increases to be in line with the growth in the state's economy, he said.

"I believe that there is more we can do, but it is going to be a matter of bringing all those perspectives to the table and thinking about where do we want to be, what point do we want [to be] at, and how quickly do we want to be there and we obviously look at mistakes made in other places" such as Kansas, said Shepherd.

Gilmore said his brother, state Sen. Ben Gilmore, R-Crossett, has indicated criminal justice overhaul legislation that he is working on probably will end up looking more like the federal criminal justice rules in place.

Law enforcement officials have indicated they are arresting many of the same people again and again, and "there have got to be some reforms put into place so when someone commits a violent offense ... that they do real time for that," he said.