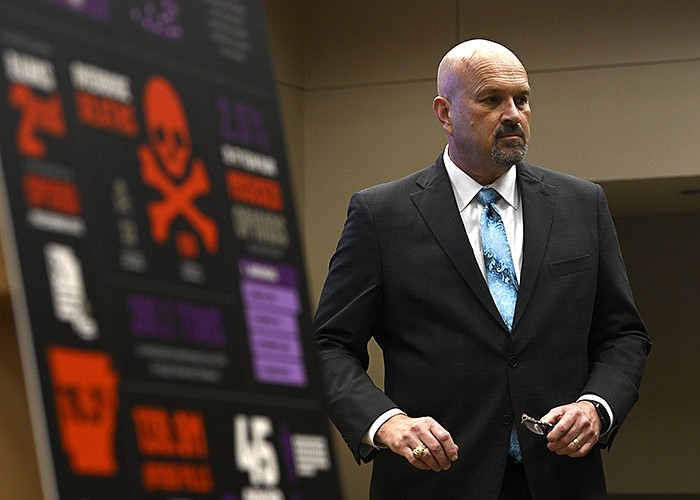 Kirk Lane, Director of the Arkansas Opioid Recovery Partnership, addresses the media during a press conference at the Association of Arkansas Counties in Little Rock on Friday, Nov. 4, 2022 announcing plans for dispersing opioid settlement funding across the state in Little Rock. (Arkansas Democrat-Gazette/Stephen Swofford)

Two months after its founding, the Arkansas Opioid Recovery Partnership has begun distributing funds in its fight against opioid addiction in the state.

As of Wednesday, the partnership has approved almost $3.5 million in general funding and an additional $177,000 in credits for the Arkansas Naloxone Bank.

Of those totals, the amounts distributed include:

The recovery partnership hopes to make its distribution numbers publicly available in an interactive form on its website by the end of the week.

"We want the transparency there, so that's why I'm not bashful about putting it out," said Director Kirk Lane.

The Arkansas Opioid Recovery Partnership, unveiled in November, is a partnership between the Association of Arkansas Counties and the Arkansas Municipal League.

Led by Lane,the partnership is tasked with distributing funds the state receives from an initial $216 million opioid settlement allocation. Lane estimated that so far, the state has received $16 million.

Overseen by the Crittenden County Circuit Court, the settlement money can only be spent for future programs, projects and strategies aimed at ending the opioid epidemic in Arkansas. The money will be split evenly, with cities, counties and the state each receiving one-third of every Arkansas dollar.

"I think it's moving along very well," said Lane, who estimates there are at least 12 entities, including law enforcement, in the process of putting applications together. "Don't think you can just write a proposal and say, 'I need a half million dollars, because I just want to do this.'"

When it comes to an organization requesting funds for a recovery center, Lane said the program's application must include "exactly what current program is, how they want to expand that program and also have a sustainability plan that we weigh very strongly."

The partnership will use funds to pay for overdose response teams like Hot Springs'. The team will be more deeply involved in the events following an overdose, including tracing the overdose back to the person who provided the drugs.

On Wednesday, Little Rock's Wolfe Street Foundation announced it had received $14,000 in credit from the recovery partnership for the Arkansas Naloxone Bank.

The foundation, located at 1015 S. Louisiana St., is an addiction recovery program that was founded in 1982. It trains people to recognize the signs of an overdose and use the Naloxone nasal spray to save lives.

The foundation, led by Executive Director Justin Buck, will hold overdose reversal training on the last Saturday of every month starting this month. Those who complete the training receive two doses of Naloxone.

"There's a big cost barrier when it comes to Narcan [the trade name for Naloxone] specifically," said Buck, who has been with Wolfe Street since September. "The cost has come down, but there's still a cost barrier. And there's also just kind of a general lack of information out there."

Buck said "all kinds of people" have taken part in training sessions.

"Most of the people are folks who are either in recovery themselves, or they are a family member of someone in recovery," Buck said. "Then we have a lot of folks out in the community who know that this is by and large an invisible disease and want to be equipped in case they ever come across somebody who's experiencing a problem or an overdose.

Buck said the foundation is willing to partner with other organizations that are interested in the Naloxone training sessions.

"We'd be happy to partner with that organization and come down and do a training on-site," Buck said.

"Supporting this initiative was an easy decision," Hyde said in a press release. "We want to do everything we can to curb the abuse of opioids in Arkansas, and the Wolfe Street Foundation's participation in this project is imperative to fighting opioid addiction in our state."

According to the Arkansas Take Back opioid dashboard,there were 146 overdose deaths in Pulaski County in 2021.

According to provisional numbers provided by the Arkansas Department of Health, there were 386 opioid overdose deaths in Arkansas in 2021. This compares to a total of 1,248 over the five-year period covering 2017-2021.

Wolfe Street's announcement came several days after a bill was filed in the Arkansas Legislature to combat fentanyl trafficking.

The bill would increase the minimum sentence for distributing, manufacturing or trafficking fentanyl to 30 years in prison. It currently carries a sentence between 10 and 40 years.